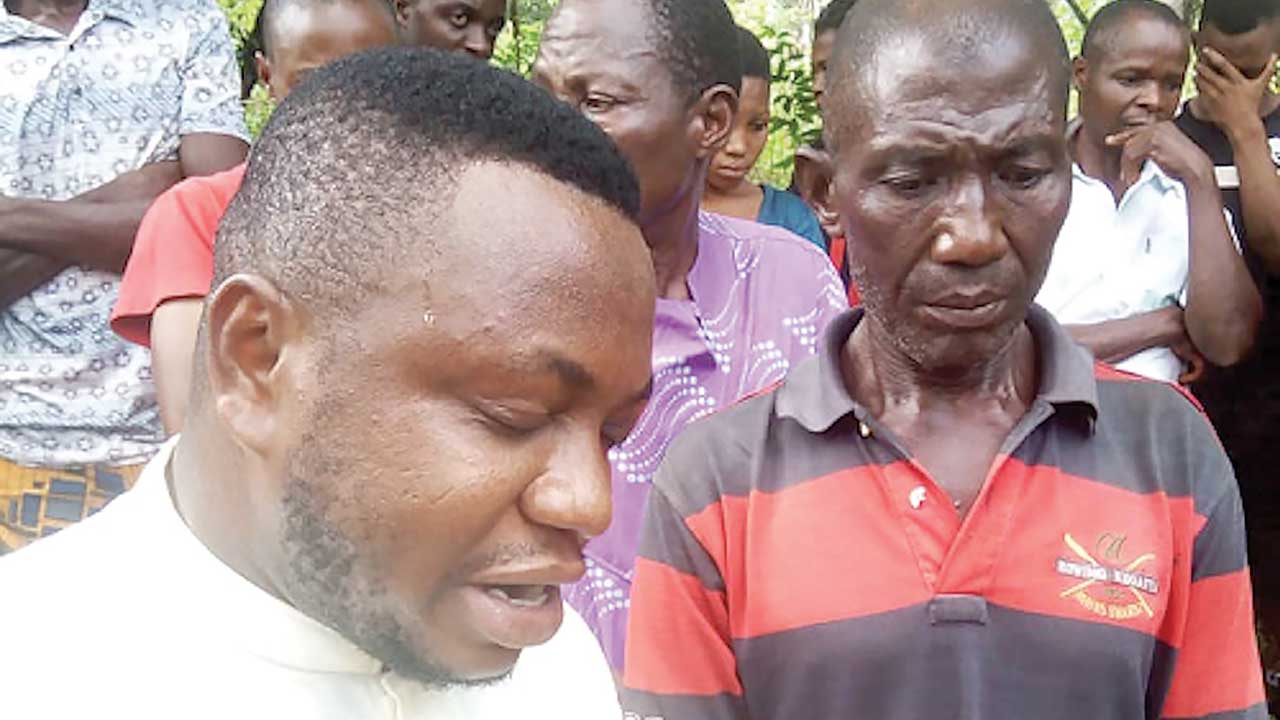 Rev Fr Nwaononenyi and the deceased’s father, Eze during prayers for the repose of the victim at the scene her body was found.

A teenage girl, Ngozi Eze, has been allegedly raped to death by unknown persons at Imufu community, Enugu Ezike, Igbo-Eze North Local Government Area of Enugu State. The deceased’s body was found in a bush behind Community Secondary School, Imufu.

She had gone for her Joint Admission and Matriculations Board (JAMB) lessons in preparation for the forthcoming Unified Tertiary Matriculation Examination (UTME). Her body was found several hours after her family had declared her missing.

The deceased’s father, Jonathan Eze, told the crowd that gathered in the bush where the body was found that he took her on his motorcycle to the Township School, Ogrute, Enugu Ezike, where she went for JAMB lessons on Tuesday evening. He went back later to pick her only to be informed that somebody had given her a lift.

“I left Township School, Ogrute and went home straight, hoping to see her but she wasn’t there. We waited till 8:00p.m. and started looking for her. She was not the type that normally socialise. We did not sleep as her telephone number was switched off. It was only this morning (Wednesday) that we got information that her body was found here.”

Rev. Father Johnson Nwanonenyi, the parish priest of the area, said a short prayer for the repose of her soul at the scene, amid wailing and sobbing by sympathisers, shortly before a team of police detectives took the body away for further investigation.

Nwanonenyi said human beings would always reap the bad seeds they sowed while on earth. “The perpetrators of this heinous crime will be exposed. God will not allow His creation to be humiliated this way, without punishing them adequately.”

The police who arrived the scene said a close observation of her body showed lacerations around her neck and ankles, suggesting she must have been strangled by the rapists. Her books and writing materials, handkerchief and shreds of her clothing were scattered around the scene.

Spokesman of Enugu police command, Superintendent Ebere Amaraizu, said they were yet to receive full report of the incident.

Meanwhile, an Ikeja Domestic Violence and Sexual Offences Court will on April 29 rule on the bail application of two men charged with drugging and gang-raping a 24-year-old woman in a hotel in Lekki, Lagos State. Justice Abiola Soladoye fixed the date after hearing the suspects’ application and the state government’s opposition to the bail.

The suspects, Don-Chima George, 25, and Olusegun Rasak, 28, pleaded not guilty to a two-count charge of conspiracy and rape. Deputy Director of Public Prosecution, Dr. Jide Martins, told the court that George and Rasak, who are dropouts of Babcock University, committed the offences on February 3 between 5:00a.m. and 7:00a.m. at Delankaster Hotels, Lekki Phase 1.

While at a nightclub, the defendants allegedly spiked the complainant’s drink with a substance that rendered her unconscious. They took the complainant to George’s father’s hotel, raped her in turns while videotaping the sexual offence. According to the prosecution, the offences contravened Sections 258 and 409 of the Criminal Law of Lagos State, 2015.

At the commencement of proceedings on Wednesday, defence counsel, Tunji Ayanlaja (SAN), applied for the defendants’ bail. He also noted that the prosecution had filed a counter-affidavit, objecting to the defendants’ bail application because of the social status of the defendants’ parents and likelihood of them interfering with witnesses since the accused are well known to the victim.

In another development, a medical doctor, Dr. Alagbe Oyedeji, has told the Ikeja Domestic Violence and Sexual Offences Court that his findings have revealed that a10-year-old girl was defiled. The police had charged a middle-aged Islamic cleric, Bashiru Obasekere, with luring a 10-year-old pupil with N200 and defiling her.

Oyedeji, who works with the Lagos State University Teaching Hospital (LASUTH), while being led in evidence by the state prosecutor, Mrs. Arinola Momoh-Ayokanbi, said the pupil also gave a verbal account of how she was defiled while he was conducting the examination on her.

Oyedeji who is also a consultant at the Mirabel Centre said: “In my report, the client gave a verbal account that a man, a neighbour called Alfa, used to send her on errands. Whenever she returns, he would lay her on the bed, remove her clothes and sexually assault her and give her N200.”

The doctor said that a medical examination he conducted on the pupil corroborated her account of the alleged defilement.