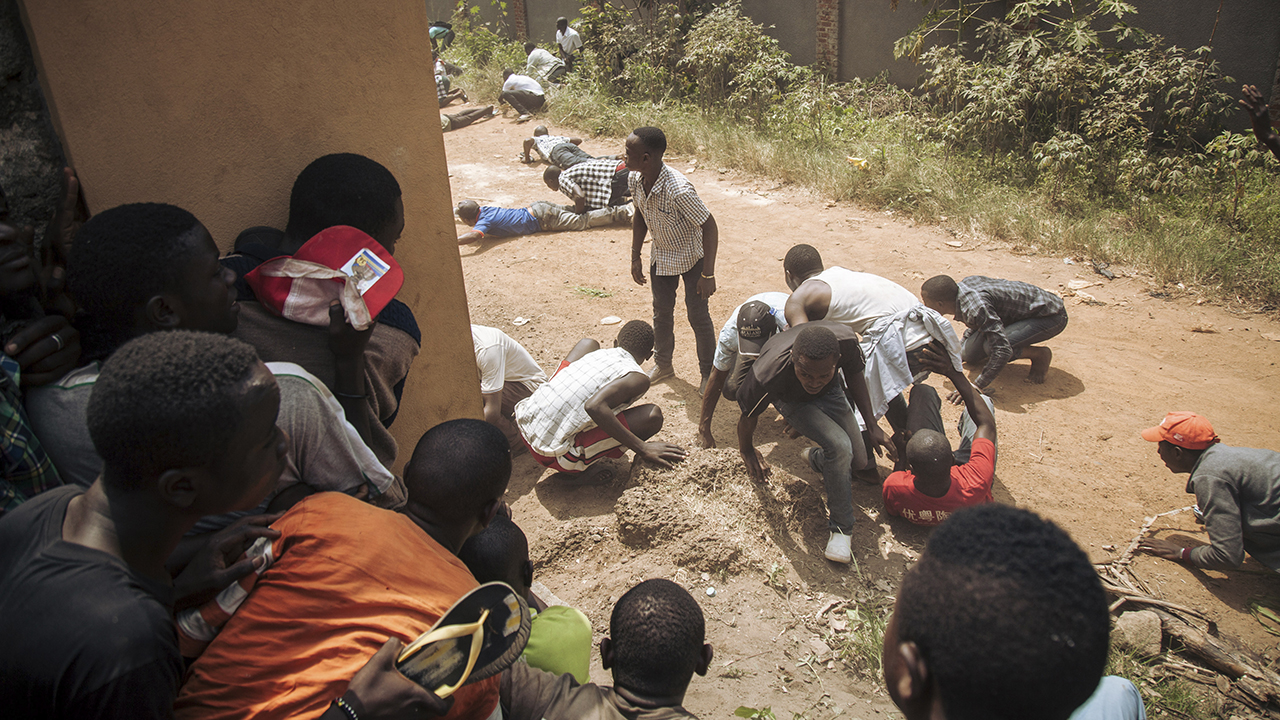 Protesters flee under FARDC military gunfire outside the offices of the electoral commission in Beni during a demonstration against the postponement of elections in Beni territory and the city of Butembo on December 27, 2018. (Photo by ALEXIS HUGUET / AFP)

A week after crucial elections to replace long-term president Joseph Kabila, the DR Congo was on tenterhooks Sunday with no date for the announcement of delayed results and just over half of ballots counted.

On Saturday, just hours before the scheduled announcement of the provisional outcome, electoral officials said there would be a delay until next week, without specifying a date.

Amid fears of tampering and rising calls from world powers for voters’ wishes to be respected, election commission head Corneille Nangaa said a little over half of the ballots had been counted since the December 30 polls.

“We ask the nation to remain patient for the time it will take to consolidate all our data,” he said on Sunday, claiming that “diplomats… are doing their utmost to threaten us,” without elaborating.

Twenty-one candidates ran in the election to succeed Kabila, who has ruled the vast conflict-ridden country for almost 18 years.

At stake is the political stewardship of the mineral-rich Democratic Republic of Congo that has never known a peaceful transition of power since independence from Belgium in 1960.

Kabila was due to step down two years ago, but clung on to power, sparking widespread protests which were brutally repressed, killing dozens.

Last month’s election, preceded by repeated delays, was relatively peaceful. But tensions have built over the lengthy counting process amid fears the results could be manipulated to install Kabila-backed Shadary in the presidency.

The electoral commission had undertaken to announce preliminary results on Sunday, followed by a definitive count on January 15. The president was due to be sworn in three days later.

The delay could stoke tensions in the unstable African giant of 80 million people.

Nangaa has blamed the slow count on massive logistical problems in a country the size of western Europe with poor infrastructure.

Since the vote, the authorities have cut internet access and blocked broadcasts by Radio France Internationale, causing widespread frustration.

With international concerns growing over the transfer of power in sub-Saharan Africa’s largest nation, Western powers have upped the pressure.

The United States and European Union urged Kinshasa to ensure a peaceful transfer of power.

\President Donald Trump announced Friday that the United States was sending about 80 troops to Gabon to deploy in the event of election-related unrest in nearby DR Congo.

The African Union, which had an 80-member team monitoring the vote, insisted that respecting voters’ wishes was “crucial”.

And Denis Sassou Nguesso, president of the western neighbour Republic of Congo, urged restraint in uncertain times to “safeguard peace and stability in this brother country”.

The country’s powerful Catholic Church, the National Episcopal Conference of Congo (CENCO), which deployed the largest observer mission with 40,000 monitors on the ground, said Thursday it knew who had won the vote, without naming him.

CENCO chief Marcel Utembi, in a letter to Nangaa, warned that of all possible irregularities, the “worst that could push the Congolese people to rise up would be to publish results, even provisional, that don’t match the reality of the ballot boxes.”

He added: “If there’s an uprising, it will be CENI’s fault.”.

Nangaa accused CENCO of seeking to “intoxicate the population in preparing an uprising,” while the ruling FCC coalition accused it of “seriously breaching” the constitution and electoral law.

The last two elections in 2006 and 2011, both won by Kabila, were marred by bloodshed, and many feared a repeat if the results this time are placed in doubt.

Between 1996 and 2003, the DR Congo suffered two wars that claimed millions of lives through fighting, starvation and disease.