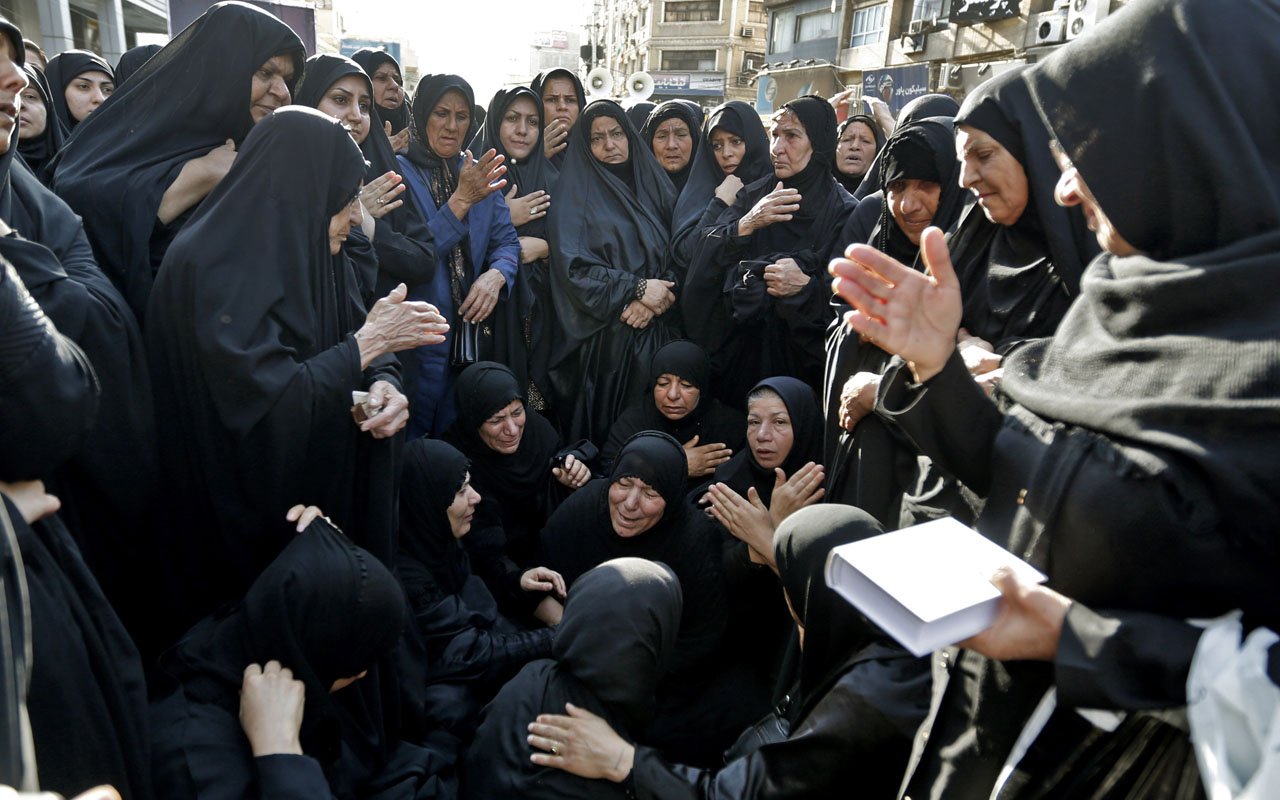 Iranian women mourn during a public funeral ceremony for those killed during an attack on a military parade on the weekend, in the southwestern Iranian city of Ahvaz on September 24, 2018. Four militants attacked a Saturday parade marking the start of the 1980-1988 Iran-Iraq war, spraying the crowd with gunfire and killing 24 people. / AFP PHOTO / ATTA KENARE

Tens of thousands of mourners attended a funeral on Monday in the southwestern Iranian city of Ahvaz for soldiers and civilians killed in an attack on a military parade.

Four militants attacked the Saturday parade marking the start of the 1980-1988 Iran-Iraq war, spraying the crowd with gunfire and killing 24 people.

Iranian officials blamed Arab separatists, backed by Gulf Arab allies of the US, for the operation.

AFP reporters on Monday saw members of the public and the military carrying coffins draped in the Iranian flag, some bearing pictures of the deceased.

The mourners, mostly wearing black, carried pictures of the dead along with banners reading “we will stand to the end” and “no to terrorism”.

Under blazing sun, crowds streamed in from all four main streets leading into the city-centre square where the funeral was held, three of them dedicated to men and the fourth to women.

In the square itself, also segregated, a woman dressed in the traditional Arab-style chador wailed loudly and held a picture of her son, Reza Shoaibi, a conscript who was among the dead.

As the funeral progressed, her wailing and expressions of sorrow steadily grew louder until she fainted.

The heat became so intolerable that trucks sprayed water onto the crowd as temperatures hit 40 degrees Celsius (105 fahrenheit).

Mourners waved red, green and black flags with revolutionary messages, as well as the flags of Arab tribes from the surrounding Khuzestan region.

Khuzestan, which has a large ethnic Sunni Arab community, was a major battleground of the 1980s war with Iraq and it saw unrest in 2005 and 2011.

‘Devastating’ revenge
Monday’s ceremony began in front of the square’s Sarallah Mosque with speeches by generals and security officials.

Intelligence Minister Mahmoud Alavi said that arrests had already been made.

“The terrorists themselves have perished, our agents will identify their remnants and supporters to the last man. A major part of them have already been arrested,” he told the crowd.

“We promise that our reaction will be devastating, we warn everyone that we will take revenge,” he told mourners.

After the speeches ended, a famous wartime religious chanter sang songs of lamentation as thousands of mourners beat their chests in unison, a traditional mourning practice of Shiite Muslims.

Later, the coffins were transported to the city cemetery and laid to rest.

The dead ranged from a preschool boy to a wheelchair-bound war veteran.

Pictures of women and children scrambling to find cover evoked an emotional response from Iranians.

Abdolzahra Savari, an ethnic Arab who had attended the funeral, called the attackers infidels.

“These are ruthless people with no shred of humanity in them,” he said.

Sabah Abiad, a middle-aged bank employee who attended the funeral, said the unity among the region’s different groups was self-evident.

“As you can see now, all of the people, whether they’re Lor, Arab, Shushtari or Dezfuli, are all here today and all say death to the terrorists,” he told AFP.

This year’s parades had special significance as tensions with the United States have peaked since the US withdrew from the 2015 nuclear deal in May and began to re-impose unilateral economic sanctions on Tehran.