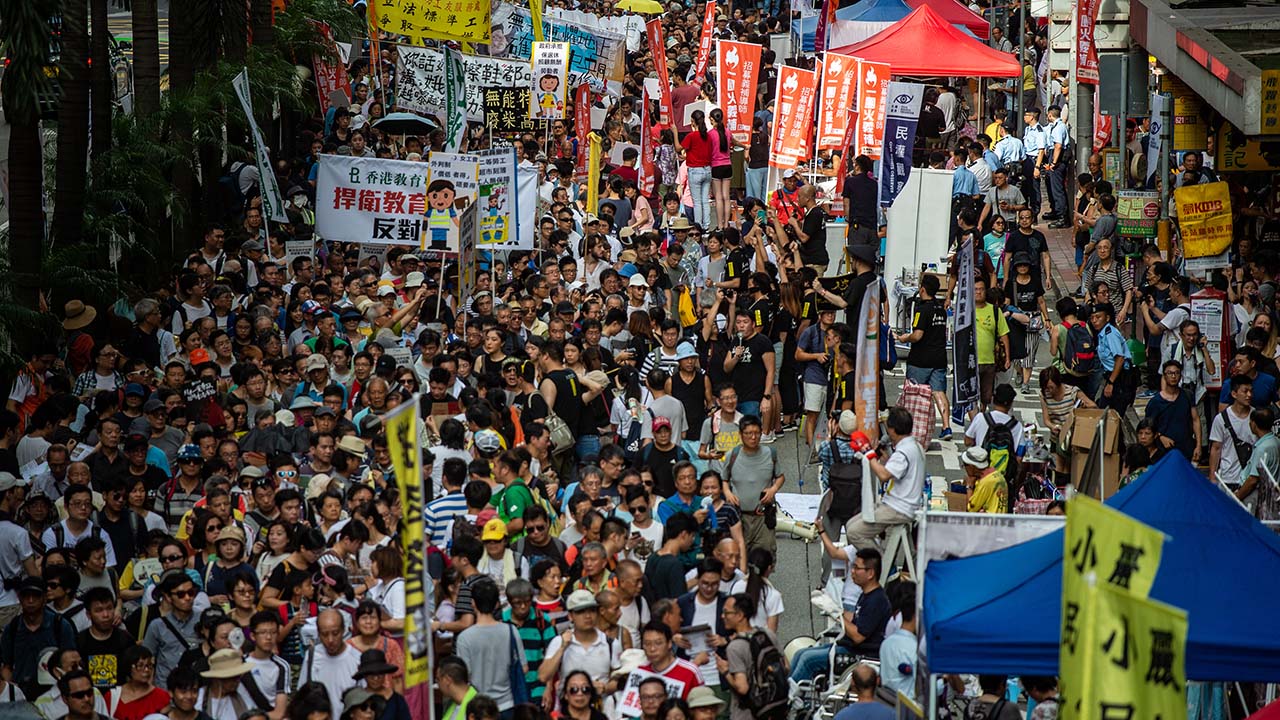 People attend a protest march in Hong Kong on July 1, 2018, to coincide with the 21st anniversary of the city’s handover from British to Chinese rule. / AFP PHOTO / Philip FONG

Protesters marched through central Hong Kong on Sunday in one of the city’s major annual pro-democracy rallies as organisers said the event was coming under unprecedented pressure from authorities.

Beijing has become increasingly intolerant of signs of dissent in semi-autonomous Hong Kong since massive pro-democracy rallies in 2014 brought parts of the city to a standstill and the subsequent emergence of activists demanding independence from China.

Hong Kong has rights unseen on the mainland, including freedom of expression, but there are concerns those liberties are now under threat from a repressive Beijing and a loyalist local government.

Ahead of this year’s march — which takes place on the anniversary of the city’s return to China by colonial power Britain in 1997 — police rejected a number of starting points suggested by organisers.

In the past, protesters have gathered on the main football pitches inside Hong Kong’s Victoria Park.

But since last year, when China’s President Xi Jinping paid a visit to mark 20 years since the handover, that area has been given over to a pro-Beijing rally.

“This year is a turning point in which (authorities) have used different ways to mobilise their power to suppress the rally,” Sammy Ip, from the Civil Human Rights Front which organises the march, told AFP.

Police warned residents they could be arrested for unlawful assembly if they joined the protest along the route, which Ip described as a way to “intimidate citizens”.

Pro-Beijing Hong Kong newspaper Ta Kung Pao called for the march to be outlawed in an editorial last month.

Ip said the democracy movement was at a low ebb and was now being “hounded” by the government.

The march set off from a grass area at one side of the park and culminated at the government’s headquarters.

“It’s about justice,” one 74-year-old who gave her name as Ms Liu told AFP.

“The problems in Hong Kong have always been serious but now they’re getting worse.”

“The government isn’t working for the people and a lot of Hong Kong people are suffering,” she told AFP.

Protesters flouted the police ban on joining midway through the march and speakers thanked them for “risking arrest”.

Since the 2014 Umbrella Movement, leading pro-democracy activists have been prosecuted on protest related charges.

Pro-democracy and pro-independence activists have also been barred from standing for office in Hong Kong’s partially elected system, or ejected from seats they had won through a public vote.

Other rights groups also joined the march, including LGBT campaigners as well as protesters calling for better living conditions and equality in the densely packed city, which has an ever-widening wealth gap.