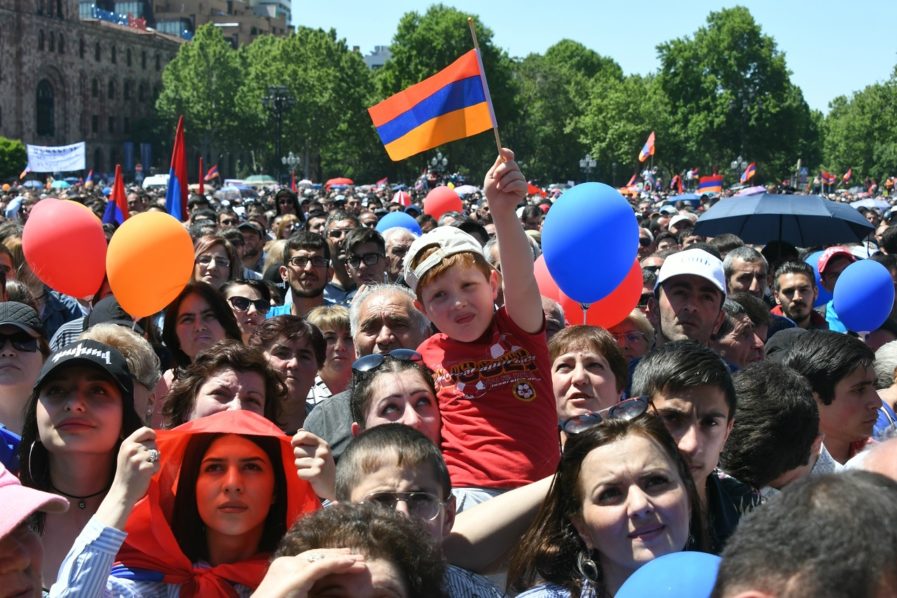 Supporters of Armenian protest leader Nikol Pashinyan attend a rally in downtown Yerevan on May 1, 2018. At least 20,000 supporters of Armenia’s opposition leader Nikol Pashinyan rallied in the centre of the Armenian capital on May 1, 2018 as he warned lawmakers in parliament of major unrest if they did not elect him prime minister. / AFP PHOTO / Vano SHLAMOV

At least 20,000 supporters of Armenia’s opposition leader Nikol Pashinyan rallied in the centre of the Armenian capital on Tuesday as he warned lawmakers in parliament of major unrest if they did not elect him prime minister.

Heeding the 42-year-old’s call to take to the streets, huge crowds gathered in and around the capital’s Republic Square, clutching tricolour flags and watching a live video stream from the nail-biting special parliamentary session on a giant screen, an AFP journalist reported.

“There is information that (former presidents) Serzh Sarkisian and Robert Kocharyan — the famous tandem — are planning to take back power,” Pashinyan told lawmakers in parliament.

“I want to warn them — gentlemen, the mistaken interpretation of people’s leniency as a weakness can lead to a genuine political tsunami.”

“I call on everyone to take to the streets because once again they want to steal the people’s victory,” he added.

Moscow-allied Armenia has been in the clutches of a severe political crisis for the past few weeks, with Sarkisian stepping down last week after a decade in power in the face of major protests in the impoverished South Caucasus nation.

Pashinyan, who is the sole candidate for the post of prime minister, insists that only he can rid Armenia of corruption and poverty and conduct free and fair parliamentary elections.

He however is a handful of votes short of a majority and lacks the crucial support of Sarkisian’s ruling party to get elected.

Speaking to his supporters in the early hours of Tuesday, Pashinyan said that the ruling party planned to derail the vote and urged hundreds of thousands to take to the streets.

‘Republicans cling to power’
A source familiar with the negotiations told AFP that the situation was febrile, saying Pashinyan could still be elected prime minister if several Republican lawmakers defected and voted for him.

“The Republican Party leadership is clinging to power and opposes Pashinyan’s election. The outcome of the vote now depends on how individual Republican Party MPs will vote,” the source said.

The source earlier said Pashinyan and the Republican Party had struck a backdoor deal several days ago, with the ruling party agreeing to support his bid.

But it appears that the ruling party backed out at the last minute.

In a troubling sign, Sarkisian’s party has not publicly announced its official stance prior to the vote, with a senior lawmaker only saying it will not stand in the way of Pashinyan’s candidacy.

Over the past few days Pashinyan has secured the backing of two major parties including Prosperous Armenia, giving him a total of 47 votes.

But he was still six votes short of the 53 he needs from the 105-seat legislature, where the Republican Party has a majority.

David Babayan, a 25-year-old software specialist, warned that the ruling party’s desire to cling to power would backfire.

“They will sign their own political death sentence,” he told AFP.

Pashinyan’s protest movement had accused ex-leader Sarkisian of a power grab, saying he had failed to tackle a litany of problems like corruption, poverty and the influence of oligarchs.

Many political observers had said in the run-up to the vote that it was highly likely that the hugely popular protest leader would be elected prime minister, saying even the Republican Party appeared to understand that Pashinyan’s victory would calm things.

Observers and the international community have expressed concern that the turmoil could destabilise the Moscow-allied nation, which has been locked in a territorial dispute with Azerbaijan for decades.

Russia has urged compromise while the United States has called for “a resolution that reflects the interests of all Armenians”.