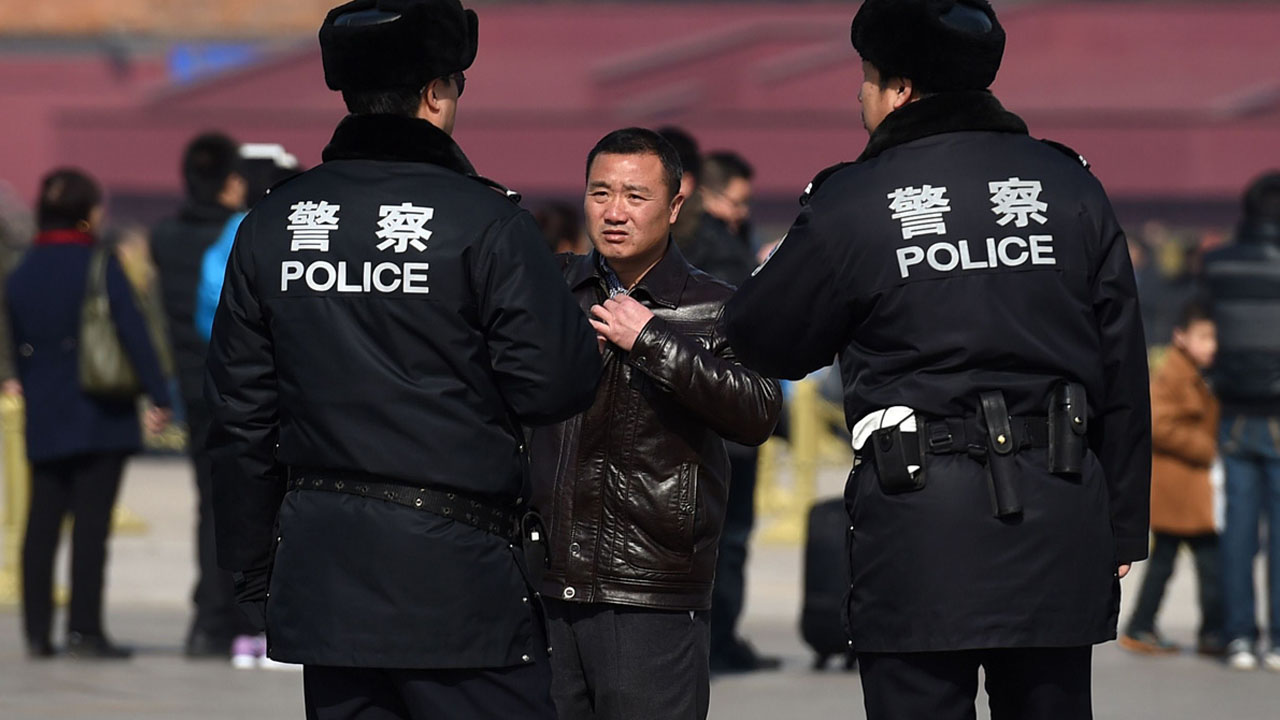 File Photo: Chinese police question a man (C) in Tiananmen Square, next to the Great Hall of the People, the venue for upcoming meetings of China’s legislature in Beijing on March 2, 2015. China’s Communist Party-controlled legislature, the National People’s Congress (NPC), gathers in the capital this week with the “rule of law” high on the agenda. AFP PHOTO / Greg BAKER

Three people were injured and the suspect killed in an arson and homemade explosive attack on a police station in northeastern China on Thursday, local authorities said.

The attacker set fire to the Shenyang Public Security Bureau’s traffic police department at about 1:50 pm (0550 GMT) before setting off an explosive device made with gunpowder, the bureau said in a statement.

“The suspect died on the spot,” the bureau said, without specifying how he died.

One civilian and two police officers suffered minor injuries in the attack, which is under investigation, said the bureau in Shenyang, Liaoning province.

Images posted on the social media account of state broadcaster CCTV showed smoke billowing from the lobby of the traffic police station.

Another picture showed a blackened lobby with burn marks on the building exterior, while second storey windows and the windshields of cars parked outside were damaged in the blast.

A policewoman also appeared to have hurt her arm in the incident, an eyewitness told the state-run Beijing Youth Daily.

The incident came two months after twin blasts in the neighbouring city of Changchun rocked a high-rise building, killing one person and injuring another.

Past blasts
Bomb explosions have occurred elsewhere in China in recent years.

Last July, a 26-year-old man set off a small explosion outside the United States embassy in Beijing, injuring his hand and sending smoke into the air. Police said he was from the northern region of Inner Mongolia, but did not reveal any motive.

In June 2017, a blast outside a kindergarten in the eastern Jiangsu province killed eight and injured dozens. The explosion was blamed on a 22-year-old introvert with health problems who died in the blast.

Ethnic Uighurs from the restive far west region of Xinjiang have been tied to mass stabbings and bombings that left dozens dead in recent years across the country. Civil unrest and clashes with the government killed hundreds more.

The unrest prompted authorities to launch a sweeping campaign against terrorism and separatism that included the construction of what rights groups denounce as internment camps holding as many as one million Uighurs and other mostly Muslim minorities.

The Chinese government describes the camps as vocational education centres aimed at combatting extremist thoughts and providing jobs, adding that no attacks have been committed in the region in the last two and a half years thanks to the strategy.

At least 150 Tibetans have also set themselves on fire since 2009 in protest against Beijing’s presence in Tibet, most of whom later died.