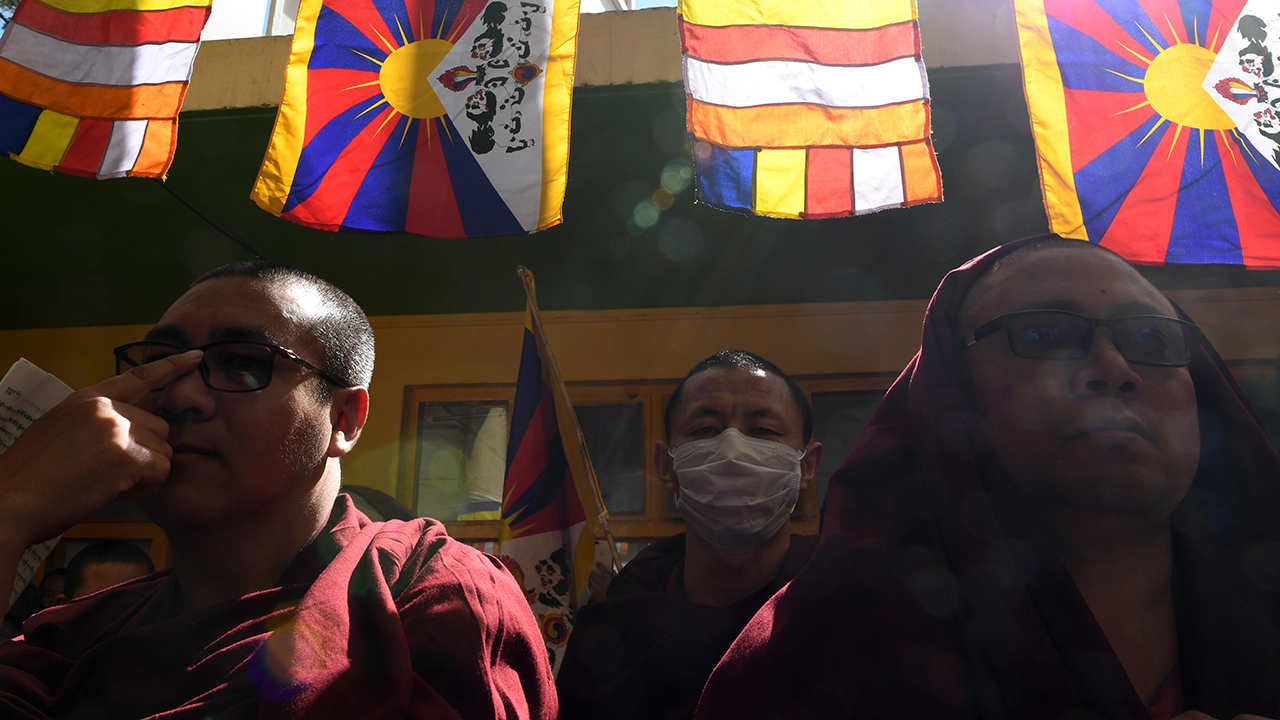 Monks attend the gathering at the Dalai Lama’s temple during the 60th anniversary of the Tibetan Uprising Day that commemorates the 1959 Tibetan uprising, in McLeod Ganj on March 10, 2019. – Crowds gathered March 10 at the Dalai Lama’s temple in India to commemorate 60 years since the failed Tibetan uprising against Chinese rule that drove the spiritual leader into exile. (Photo by Money SHARMA / AFP)

Huge crowds gathered at the Dalai Lama’s temple in India Sunday to commemorate 60 years since the failed Tibetan uprising against Chinese rule that drove the spiritual leader into exile.

Supporters of the 83-year-old peace icon chanted and prayed at the Buddhist shrine in mountainous Dharamsala, where the Dalai Lama established a government-in-exile after fleeing a deadly Chinese crackdown in Tibet in 1959.

Devotees in the Indian hill station the Dalai Lama has called home for six decades waved Tibet’s colourful “snow lion” flag, which China has outlawed as a symbol of separatism.

Some had “Free Tibet” painted on their faces along with the colours and distinct golden sun of the iconic flag.

The Dalai Lama himself was not present at the anniversary ceremony, but chief representatives of the exiled Tibetan administration and foreign dignitaries gathered for the solemn occasion.

Performers dressed in traditional attire danced and recited Tibetan songs at the temple for guests, which organisers said included parliamentarians from 10 nations.

A minute’s silence was held at the outset to remember those killed when China brutally crushed the fledgling Tibetan revolt, a crackdown the government in-exile claimed killed tens of thousands.

Buddhist Tibet, a vast Himalayan area of plateaus and mountains, declared independence from China in the early 20th century but Beijing took back control in 1951, having sent in thousands of troops.

The Dalai Lama — chosen at the age of two in 1937 as the 14th incarnation of Tibetan Buddhism’s supreme religious leader — was enthroned as head of state after the Chinese invasion.

His co-existence with the Beijing authorities was tense and when the Chinese authorities summoned him to an event without his bodyguards on March 10, Tibetans feared a trap that could endanger their leader.

Thousands of his supporters assembled at his summer palace to prevent him from leaving; thousands more demonstrated in Lhasa to demand the Chinese depart, the Dalai Lama would later say.

Beijing sent more troops into Tibet, and in the bloodshed that followed, refugees poured over the border into Dharamsala — already then a sanctuary for Tibetan exiles fleeing Chinese repression.

The Dalai Lama evaded Chinese authorities and slipped away dressed as a soldier, escaping to India with an entourage of supporters in a gruelling two-week trek through the Himalaya.

There he formed a government-in-exile and demanded autonomy for Tibet, a decades-long quest that would earn him worldwide respect as a figure of nonviolence. He won the Nobel Prize in 1989.

He remains a thorn in the side to China, which adamantly rejects any suggestion of Tibetan autonomy and blacklisted the Dalai Lama as a dangerous “separatist”.

Beijing continues to be accused of political and religious repression in the region, but insists Tibetans enjoy extensive freedoms and that it has brought economic growth.