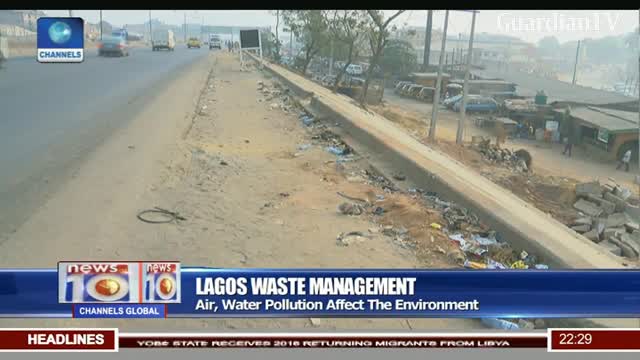 National Leader of the All Progressives Congress (APC), Sen. Bola Tinubu, says the lingering issue of waste management in Lagos State will soon be resolved.

Tinubu gave the assurance on Friday in Lagos during a meeting with the Association of Waste Managers of Nigeria (AWAM), otherwise known as PSP.

He said that there was the need to resolve the issue because of the immense contributions of the PSP operators to waste management in the state.

Tinubu assured that he would reconcille all the stakeholders in his capacity as Grand Patron of AWAM to promote the business interests of waste managers and wellbeing of Lagosians.

”It is disappointing and sad that at this stage of our development, the matter should result into petition. It should have been continuity and progress.

”Whatever is the shortcoming, we will correct it. This will get to the governor latest by Monday, April 30.

”It is sad to see Olusosun dumpsite in dangerous smoke. As a grand patron of AWAM, I am concerned driving around Lagos and seeing built up refuse.

”I must say it is a challenge that is coming back and we will not allow that to happen.

”The government and governor is trying and responsive but the complexity of Lagos is compounding by the day,” he said.

The former governor of Lagos State noted that AWAM members travelled abroad to learn international best practices in waste management and applied such in the state.

He assured that Ambode’s government would evolve the best solution that would work for the larger population.

”I challenge you to go and be ready in your various communities and lines and get ready to work. I appeal to you to maintain peace.

”The House of Assembly, the Government and the party will work together to promote your business interests.

”The only thing we can do is to encourage this kind of small scale business to grow. The governor might have been experimenting and it is not a shame to reverse to the former,” Tinubu said.

Earlier, the Chairman of AWAM, Mr Ola Egbeyemi, said that the waste crisis had become unprecedented, with increased volume of waste on Lagos streets, roads, highways and medians.

Egbeyemi, who was represented AWAM spokesman, Gbenga Adebola, said that the situation had taken Lagos back to pre-1999, when waste was competing with vehicular and pedestrian movements.

He appealed to the APC national leader to ensure that the PSP operators continued with the collection and transportation of both domestic and commercial waste.

According to him, the disposal facilities currently badly managed can be put into uptimal use, where waste are sorted out in different waste components for recycling, composting and waste-to-energy activities.

”The government should provide enabling environment for us and any other investor by providing more waste infrastructure.

“These include Material Recovery Facilities, Recycling, Waste treatment facilities, Marine Waste management, Landfill management and other value chain, among others.

”Government should provide enforcement of environmental sanitation practices and ensure that the payment for services rendered by the PSP operators are promptly paid, adopting the current franchise system.

”Government should provide guarantees and other incentives to us to enable us invest more into the industry.

”Sir, you have done this before and we believe you can do this again.

”It was your love and belief in us, that made you invest in the Private Sector Participant (PSP) programme, adopting Small and Medium Enterprise (SME) development model,” he said.

He described t the SME model as a poverty eradication tool to overcome the once insurmountable challenge of waste.

”The State has received several accolades and awards both locally and internationally and a clean Lagos had been a major electoral campaign achievements for past administrations.

”Since your Excellency established the PSP programme and after several reform programmes, so many achievements have been recorded, albeit there is still room for continuous improvement,” he said.