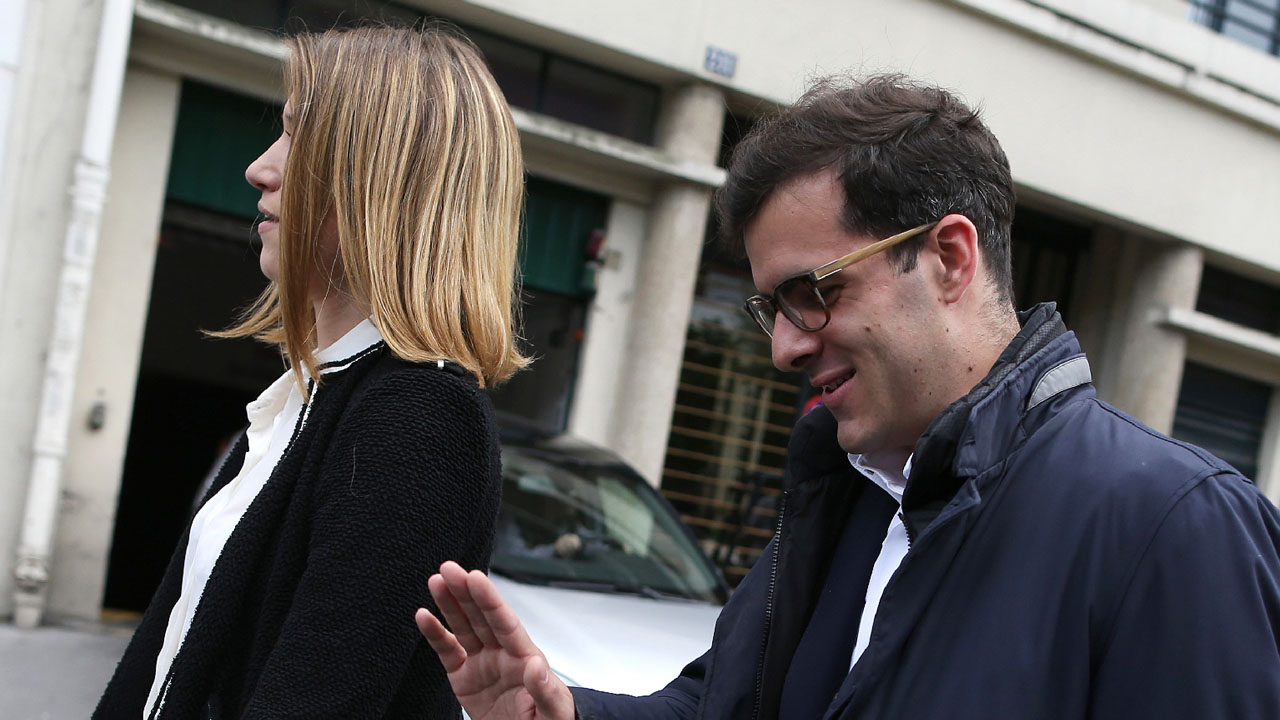 (FILES) In this file photo taken on May 13, 2017 Ismael Emelien (R), special advisor of French president Emmanuel Macron gestures in a street of Paris. – Emelien, implicated in the Benalla case, announced during an interview to a French magazine on February 11, 2019 that he was resigning. He will quit his position at the end of March, beginning of April 2019. (Photo by CHARLY TRIBALLEAU / AFP)

One of President Emmanuel Macron’s closest advisors has announced his resignation, continuing a shake-up of the French leader’s inner cabinet as he seeks to claw back lost popularity.

Ismael Emelien, a 31-year-old communications specialist who was an architect of Macron’s bid for the presidency, said late Monday that he was leaving to write a book about centre-left politics.

He follows another key confidant out of the door of the Elysee palace, speech writer and media advisor Sylvain Fort, after a damaging six-month period for Macron marked by scandal, protests and plummeting approval ratings.

“It’s not a resignation, it’s a departure,” Emelien told AFP, adding that he had always avoided the media while serving as a special advisor to Macron and that his decision to write a book meant he had to resign from his position.

“Any other interpretation of my departure — and there will be others — would be wrong,” he added.

Emelien’s young age and closeness to Macron saw him build a reputation as one of Paris’ most talented political tacticians, who worked behind the scenes providing advice on how to communicate policy choices and counter opponents.

‘The battle of ideas’
He was the brains behind Macron’s rallying call for action on climate which went viral on social media — “Make our planet great again!” — a response to US President Donald Trump’s climate scepticism and catchphrase “Make America great again.”

But his powers have been increasingly questioned in recent months, firstly over the handling of a scandal involving Macron’s former bodyguard which erupted in July, and later the “yellow vest” protests which began in November.

Since winning the presidency in May 2017, Macron has also been regularly criticised for his aloof style and desire to keep the media at a distance, leading to complaints that he gives few interviews and fails to explain himself enough.

“Ismael is someone who is very committed to the battle of ideas. He wants to lead this fight on the outside in a different way, it’s an important fight,” government spokesman Benjamin Griveaux told France 2 television, adding that it was a “personal decision”.

There have been rumours for weeks that Macron intended to shake up his staff, which has been dominated since his election by the ultra-loyal group of men in their 30s and 40s who became known as the “Macron Boys” during campaigning.

Macron’s political advisor Stephane Sejourne has left the presidential team to work on the European Parliament election campaign for Macron’s Republic on the Move party, while two other aides, for North Africa affairs and an international media spokeswoman, have also recently departed.

Macron has regained some lost popularity in recent weeks after a series of campaign-style performances at town halls across the country, organised as part of a “great national debate” to discuss the future of the country.

The government organised the debate to defuse the “yellow vest” protests which began over fuel prices but snowballed into a wide and violent challenge to Macron’s pro-business tax policies and governing style.