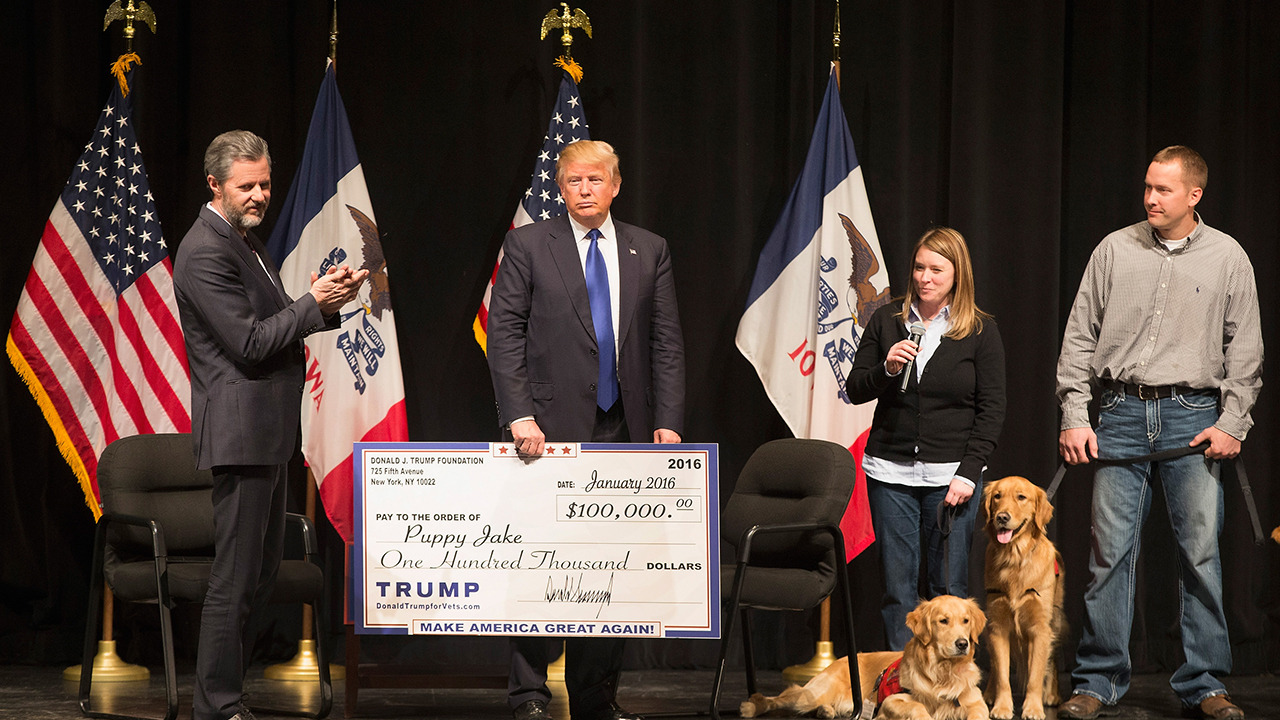 (FILES) In this file photo taken on January 29, 2016, then Republican presidential candidate Donald Trump (C) joins Jerry Falwell, Jr.(L), president of Liberty University, for a campaign rally at the Adler Theatre where Trump presented a check from the Trump Foundation to the Puppy Jake on January 30, 2016 in Davenport, Iowa. – President Donald Trump has agreed to shut down his personal charity, the Trump Foundation, which has been accused of engaging in “persistently illegal conduct,” the New York attorney general said on December 18, 2018. (Photo by SCOTT OLSON / GETTY IMAGES NORTH AMERICA / AFP)

“The Trump Foundation has done great work and given away lots of money, both mine and others, to great charities over the years — with me taking NO fees, rent, salaries etc,” Trump tweeted.

The New York state attorney general painted a far different view of the Trump Foundation on Tuesday, saying it had been “little more than a checkbook to serve Mr. Trump’s business and political interests.”

Attorney general Barbara Underwood said it had been agreed with lawyers for the Trump Foundation that it would be dissolved and its remaining assets distributed to other charities.

Trump claimed he was being treated unfairly by partisan Democrats and was the victim of what he called a “total double standard of ‘justice.’”

In announcing that the Foundation would shut down, Underwood said it was “an important victory for the rule of law, making clear that there is one set of rules for everyone.”

She said there had been a “shocking pattern of illegality involving the Trump Foundation –- including unlawful coordination with the Trump presidential campaign, repeated and willful self-dealing, and much more.”

The New York attorney general filed a lawsuit against the Trump Foundation in June, accusing it of “persistently illegal conduct.”

The suit, which continues to move forward, names the president, his sons Donald Trump Jr. and Eric Trump, and his daughter Ivanka Trump, who were on the board of the foundation.

The suit seeks $2.8 million in restitution and to bar Trump, Don Jr, Eric and Ivanka from serving on the boards of other New York non-profits.

According to the suit, Trump used foundation funds to settle lawsuits, promote his Trump-branded hotels, and for personal spending — including the purchase of a portrait that was displayed at one of his golf clubs.

The civil lawsuit is one of many legal woes facing Trump, whose election campaign is being investigated by Special Counsel Robert Mueller for possible collusion with Russia.

Last week, Trump’s former lawyer, Michael Cohen, was sentenced to three years in prison for paying hush money to two women who claimed to have had affairs with Trump and for other crimes.