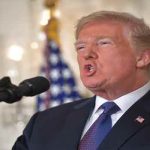 The moves brought the world’s two largest economies to the verge of an all-out confrontation long feared by markets and industry.

And the China trade offensive is only one side of Trump’s multi-front battle with all major US economic partners.

And as Trump warned of “additional tariffs” should Beijing hit back with tit-for-tat duties on American goods, China unveiled 25 percent duties on $50 billion in US imports.

“The United States can no longer tolerate losing our technology and intellectual property through unfair economic practices,” Trump said.

“These tariffs are essential to preventing further unfair transfers of American technology and intellectual property to China, which will protect American jobs.”

But at least initially, Trump’s new China tariffs will not cover the full $50 billion that Trump announced Friday.

US Trade Representative Robert Lighthizer said the punitive duties will apply on 818 Chinese products valued at $34 billion starting July 6, with a second list of $14 billion to be considered under a new review process — bringing the total possible affected import volume to $50 billion.

But it is likely companies will seek more exemptions so the final total could fall short of that amount.

Beijing’s countermeasures closely mirrored Washington’s, with 545 American exports, also valued at $34 billion, facing punitive duties as of July 6, including agricultural products and vehicles, according to the official news agency Xinhua.

The State Council said another 114 items will be subject to tariffs at a later date, the news agency said.

US farmers are especially concerned about the impact of a trade war, since they are sure to feel the hit.

“It is deeply regrettable that in disregard of the consensus between the two sides, the US has demonstrated flip-flops and ignited a trade war,” the ministry said.

It also called on other countries to “take collective action” against this “outdated and backward behaviour.”

But the White House maintains that any Chinese countermeasures would be unjust and could be met with further US sanctions.

“We have taken essentially a defensive action,” a senior US official told reporters, adding that “further threats that are going to hurt other industries …would be a mistake.”

The official, who asked not to be identified, declined to say whether Trump would make good on a March threat to hit another $100 billion in Chinese goods with tariffs in response to Beijing’s retaliation.

China in April already put punitive duties on 128 US goods, including pork, wine, and certain pipes in response to global US tariffs on steel and aluminum imposed by Trump the month before.

Brussels, Ottawa, Beijing and Mexico City already have shown they intend to inflict damage on export industries in politically-sensitive voting districts — something which could prove damaging to Republicans already facing a loss of power in November’s mid-term elections.

On Capitol Hill, influential Texas Republican lawmaker Kevin Brady, chairman of a House tax legislation committee, said he was “alarmed” by the tariffs which he said exposed US industries to “devastating retaliation.”

“I am concerned that these new tariffs will hurt American manufacturers, farmers, workers, and consumers,” he said.

And the powerful US Chamber of Commerce warned that hundreds of thousands of Americans could lose their jobs if the trade war escalated and included the auto import tariffs that Trump has threatened.

He also noted that the metals tariffs have pushed steel prices 40 percent higher since January.