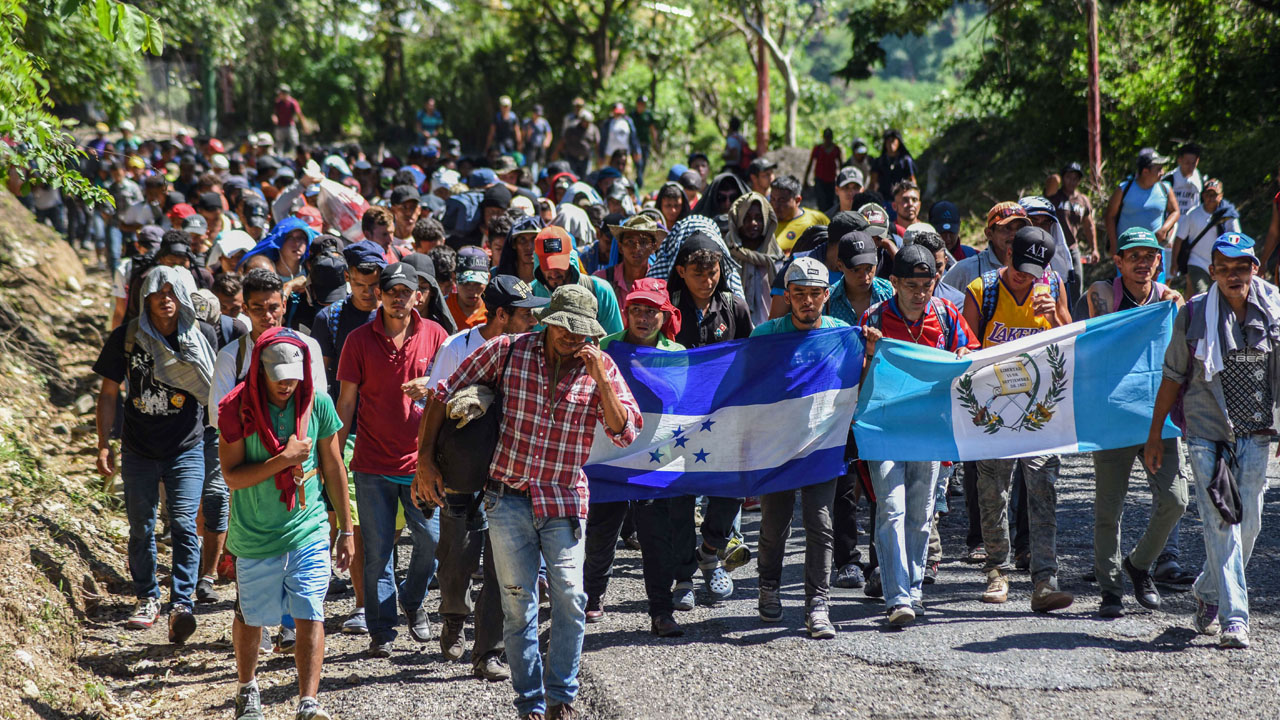 Honduran migrants take part in a new caravan heading to the US with Honduran and Guatemalan national flags in Quezaltepeque, Chiquimula, Guatemala on October 22, 2018. – US President Donald Trump on Monday called the migrant caravan heading toward the US-Mexico border a national emergency, saying he has alerted the US border patrol and military. (Photo by ORLANDO ESTRADA / AFP)

President Donald Trump kept up the pressure on Mexico Wednesday to halt groups of migrants heading to the American border, as the US enters the final stretch of campaigning before key midterm elections.

Trump has sought to put immigration front and center ahead of next week’s hotly-contested vote, ordering thousands of troops to the southern border and threatening to end automatic citizenship for US-born children of immigrants.

“The Caravans are made up of some very tough fighters and people. Fought back hard and viciously against Mexico at Northern Border before breaking through. Mexican soldiers hurt, were unable, or unwilling to stop Caravan. Should stop them before they reach our Border, but won’t!” Trump tweeted.

The administration has sent mixed messages over of Mexico’s actions, praising it for trying to help while pushing it to do more.

Trump had previously thanked Mexico for deploying anti-riot forces to the country’s southern border, and White House spokeswoman Sarah Sanders said on Fox News Wednesday that “Mexico has stepped up in an unprecedented way.”

The groups of migrants Trump has sought to cast as a threat to the United States are still in southern Mexico, hundreds of miles (kilometers) from the US border.

A first caravan, which has dwindled and now numbers some 4,000 people, according to an aid group called Pueblos sin Fronteras, arrived Tuesday in the town of Juchitan, in Oaxaca, while a smaller group of 2,000 people managed to cross the Suchiate River separating Mexico from Guatemala the day before.

Trump has announced he is sending more than 5,000 soldiers to shore up the US-Mexico border, but they will likely be limited to support activities as they are legally barred from conducting law enforcement operations in the United States.

In another move likely to appeal to his right-wing base ahead of the upcoming vote, Trump has said he plans to scrap by executive order a constitutional guarantee to citizenship for persons born on US soil, with few exceptions.

He has criticized the guarantee, which is enshrined in the 14th Amendment of the US Constitution, for allowing children of illegal immigrants to become citizens.