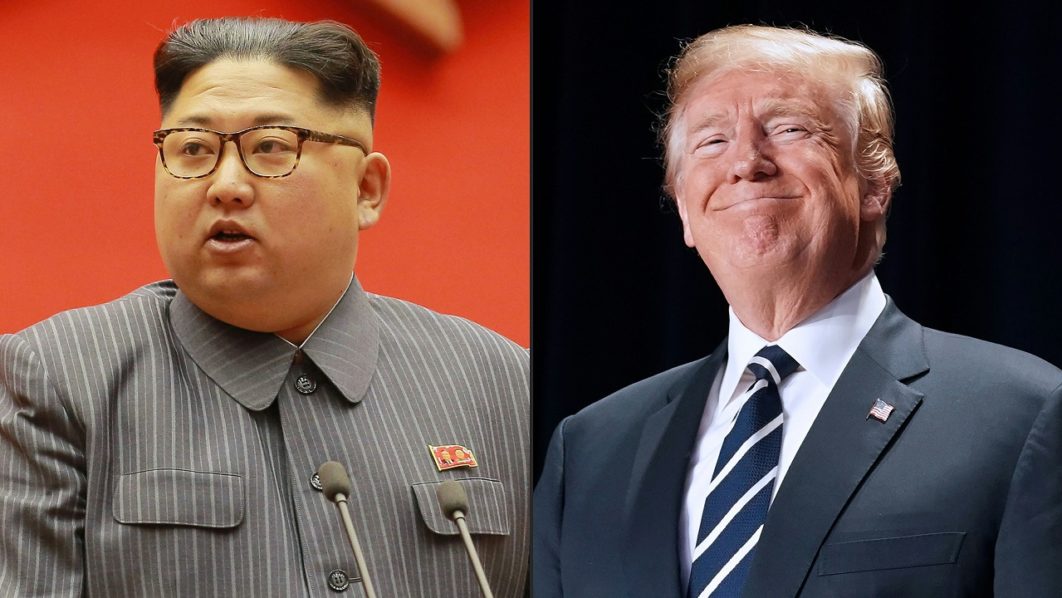 (FILES)(COMBO) This combination of pictures created on March 9, 2018 comprising of a file picture from North Korea’s official Korean Central News Agency (KCNA) taken on December 23, 2017 and released on December 24, 2017 showing North Korean leader Kim Jong-Un during the 5th Conference of the Workers’ Party of Korea Cell Chairpersons and a file picture showing US President Donald Trump looking on during the National Prayer Breakfast at a hotel in Washington, DC on February 8, 2018. US President Donald Trump said April 26, 2018 that three or four possible dates were being considered for his landmark summit with North Korean leader Kim Jong Un.”We have a decision to be made. We have three and four dates. That includes five locations. That will be narrowed down,” Trump said on Fox News.Trump had previously said his much-anticipated meeting with Kim would take place in May or early June, within weeks of Friday’s historic inter-Korean summit./ AFP PHOTO / KCNA via KNS AND AFP PHOTO / STR / South Korea OUT /

US President Donald Trump said Thursday that three or four possible dates were being considered for his landmark summit with North Korean leader Kim Jong Un.

The American leader has previously mentioned late May or early June for the highly anticipated meeting, within weeks of Friday’s historic inter-Korean summit.

“We have a decision to be made. We have three or four dates. That includes five locations. That will be narrowed down,” Trump said on Fox News.

The tension-racked peninsula has seen a dramatic diplomatic detente, with the nuclear-armed North last week announcing a moratorium on nuclear tests and long-range missile launches.

Asked about his expectations for the meeting with the man he has called “Rocket Man,” the American president was unclear.

“Could be I walk out quickly with respect or could be maybe even the meeting won’t take place, who knows?” Trump said.

“But I can tell you right now they want to meet.”

“I can only say this: When I came into office, people thought we were going into nuclear war, okay? And now they’re saying, ‘Wow, looks like this will be taken care of,’” he said.

Trump noted that during his recent, secret, visit to North Korea, CIA chief Mike Pompeo was not initially scheduled to meet with Kim.

“We have incredible pictures of the two talking and meeting, which I would love to release if we can,” Trump said.

“It was more than hello. They got along. They were with each other more than an hour. They spoke. He also spoke with his counterparts in North Korea. They had a great meeting.”

Pompeo faced a Senate confirmation vote later on Thursday to replaced Rex Tillerson, who was sacked as secretary of state.