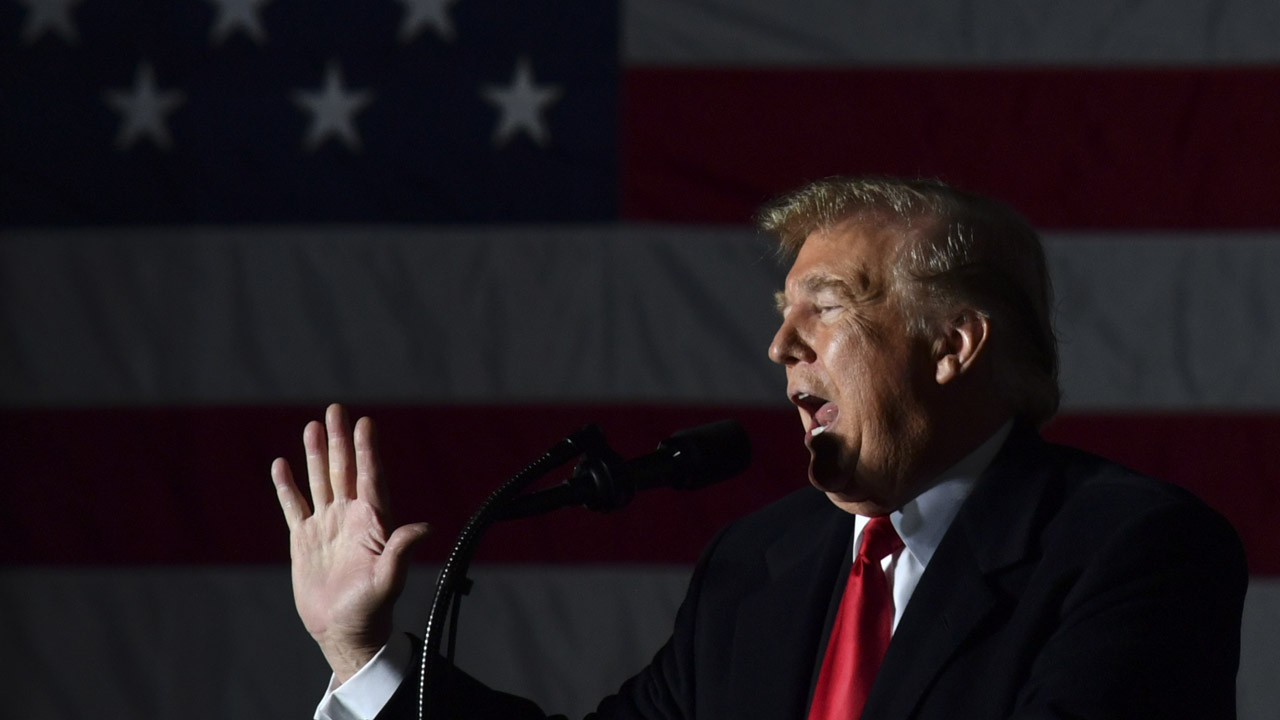 (FILES) In this file photo taken on October 27, 2018 US President Donald Trump speaks during an election rally in Murphysboro, Illinois. – President Donald Trump plans to abolish the right to citizenship for anyone born in the United States — guaranteed by the 14th Amendment to the US Constitution — with an executive order, he said in an interview excerpt released October 30, 2018. While Trump asserts that he can change the provision with such an order, that is far from certain: there is a set process for modifying the constitution, which does not include presidential decree. (Photo by Nicholas Kamm / AFP)

President Donald Trump said he will scrap a constitutional guarantee to citizenship for anyone born on US soil in a headline-grabbing move bolstering his anti-immigration platform a week before midterm elections.

The surprise announcement in an interview with Axios, released in part on Tuesday, followed the dispatch of more than 5,000 regular troops to the Mexican border, itself a highly unusual move prompted by Trump’s warnings of a migrant “invasion.”

The birthright citizenship proposal was likely to prove even more controversial, given questions over whether a president can meddle with the constitution at all.

The right to US citizenship for all born in the country is enshrined in the 14th amendment. To change the constitution requires a two-thirds majority in Congress — something almost unthinkable in today’s deeply partisan, near evenly split legislature.

But Trump told Axios that he now believes a stroke of his pen will be enough.

“It was always told to me that you needed a constitutional amendment. Guess what? You don’t,” Trump said in an interview with Axios. “Now they’re saying I can do it just with an executive order.”

Trump railed against the current rule, erroneously declaring that the United States is unique in granting citizenship this way.

“We’re the only country in the world where a person comes in, has a baby and the person is essentially a citizen of the United States for 85 years with all of those benefits. It’s ridiculous. It’s ridiculous and it has to end,” he said.

In fact, while most countries around the world do not grant citizenship automatically to newborns, more than two dozen do, including Canada which like its US neighbour grants citizenship to children born to illegal immigrants.

Trump said he had spoken to legal counsel about the plan and that the change is already in the works.

“It’s in the process, it’ll happen — with an executive order.”

Aimed at voters
The constitutional amendment in question reads: “All persons born or naturalized in the United States, and subject to the jurisdiction thereof, are citizens of the United States and of the State wherein they reside.”

Trump’s surprise policy announcement will trigger intense legal debate over the meaning of those words and how to apply the venerable constitution in a changing world.

Excerpts from the Trump interview gave no indication of the timing of the proposal. However, while the birthright row will likely drag on, the political impact was sure to be immediate and intense — right ahead of the midterms, where Trump has made slashing immigration his signature idea.

In the final countdown to the November 6 polls, which could see opposition Democrats seizing control of at least part of the Republican-held Congress, Trump has doubled down on depicting the country as under attack by immigrants.

His order for large numbers of active duty soldiers to deploy in coming days to the border, reinforcing thousands of already deployed National Guard troops, brought the highest level of militarization to the border with major trading partner Mexico in recent years.

Trump says the armed forces are needed in the face of a “caravan” of several thousand impoverished Central Americans who are slowly trekking north in an attempt to enter the United States.

Many of the migrants are fleeing the grip of criminal gangs that flourish in their homelands, but Trump has repeatedly asserted that the crowd itself is comprised of dangerous elements.

“Many gang members and some very bad people are mixed into the Caravan,” he tweeted, without providing evidence. “This is an invasion of our Country and our Military is waiting for you!”

The president’s increasingly hardline anti-immigration stand could help him take back the agenda after a week dominated by the massacre of 11 people in a Jewish synagogue in Pittsburgh, rocking a country already on edge after more than a dozen homemade bombs were sent to Trump opponents.

The Florida man accused of mailing the pipe bombs appeared to have been a hardcore Trump supporter and critics have claimed that the president’s divisive language on immigration is at least partly responsible for encouraging extremist violence.