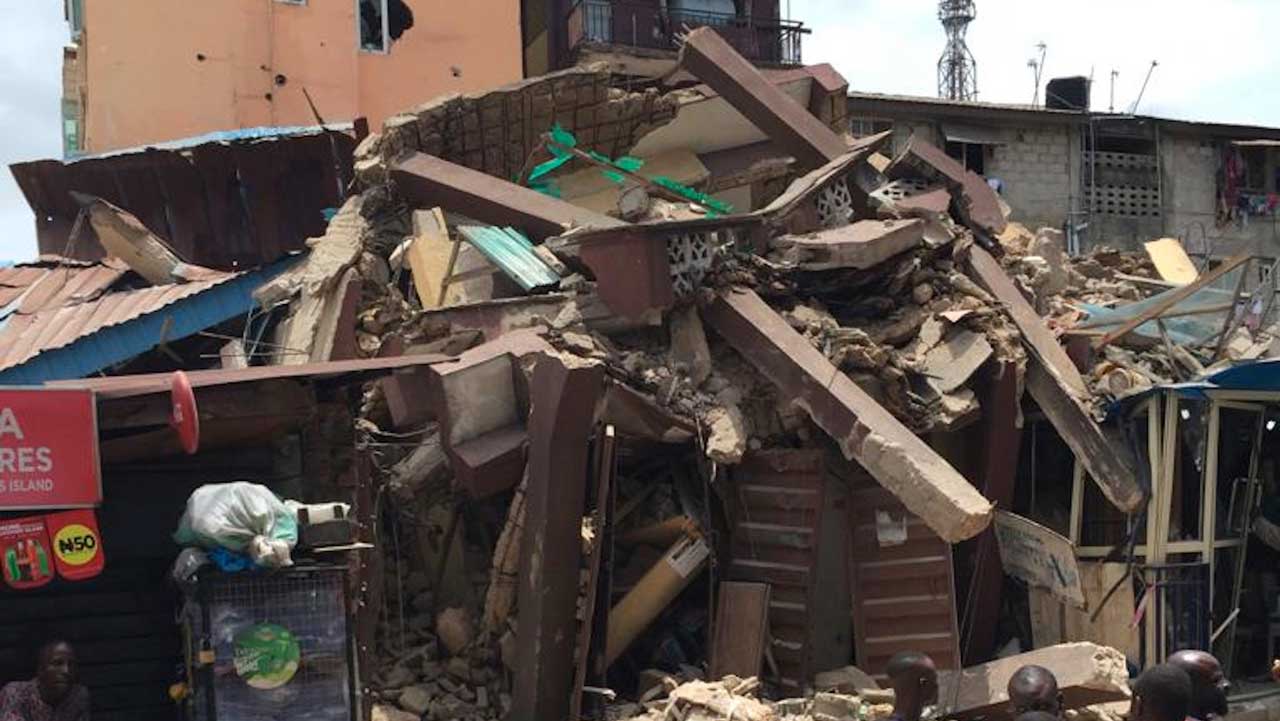 Two persons yesterday sustained varying degrees of injuries after another three-storey building collapsed in Lagos Island. The incident, which occurred at No. 50 Kakawa Street, has brought to four the number of buildings that had collapsed in the area since the March 13 disaster that killed 20 persons on Massey Street, Ita-Faaji.

It was gathered that the latest collapsed building had been marked for demolition for a long time but officials of the Lagos State Building Control Agency (LABSCA) did nothing to pull it down until it caved in on Monday afternoon. Those who sustained injuries were residents of a nearby building the collapsed structure fell on, while another three-storey building situated on No. 47/49 Odunlami Street, directly behind the collapsed one was also affected.

The shop owner, Muritala Ageshin, said he was thankful the building did not collapse on himself and his younger brother who were packing out their wares. “My brother and I were inside the shop, packing out our belongings because government officials came last Friday and gave all tenants in the building quit notice with instruction that they are coming back today to demolish it.”

Meanwhile, the Building Collapse Prevention Guild (BCPG) yesterday cautioned that unless drastic measures being proposed by the body to stall incessant building collapse are implemented by government, a whooping 36,000 potential buildings await collapse on the average in the state.

It warned that most building in the state are not constructed by people who are properly trained to do the job stressing that the professionals participate in less than 20 per cent of the volume of on-going construction activities.

Speaking in Lagos during a world press conference attended by representatives of the seven professionals in the built environment, national president of BCPG, George Akinola, said a survey revealed that over 45,000 sites existed at a time in Lagos and by deduction, quacks and other faceless characters are responsible for the remaining 80 per cent.

On how to curb the malaise of collapses, he said the Lagos government through its building control agency should immediately establish a database for new and on-going building works for effective monitoring and planning.“The Lagos State Building Control Agent are understaffed and under-trained. It is practically impossible and unviable for government agents to effectively cover a vast and continuously active construction site as Lagos.”

According to him, specific emphasis should be paid to areas such as Lagos Island, Mushin, Ajegunle, Somolu, Bariga, Makoko, Ebute-Meta, Surulere, Abule Egba among others.The state government has, however, urged occupants of marked distressed buildings across the state to immediately vacate them pending the arrival of the LASBCA demolition team. Also, relief and resettlement centres have been opened to accommodate those affected.

The Commissioner for Physical Planning and Urban Development, Prince Rotimi Ogunleye, made the appeal in reaction to yesterday’s incident. He said: “The building in question had been identified as distressed by the officers of LASBCA and all the necessary statutory notices had been duly served. Fortunately, occupants had been evacuated before the incident occurred.”

Already 25 buildings have been removed by LASBCA as the government steps up measures to rid the state of distressed buildings so as to prevent loss of lives and property.As part of efforts to provide assistance to victims of various recent disasters as well as mitigate its impact, the Lagos State government said it is ready to accommodate the affected residents of the ongoing demolished defective and distressed buildings on Lagos Island at the Lagos State Relief/Resettlement Centre, Igando.

Speaking yesterday while on a media tour of the Igando Resettlement Centre, the Commissioner for Information and Strategy, Kehinde Bamigbetan, said the state was working in line with international best practices in the resettling of persons displaced by the on-going demolitions. Bamigbetan said the relief centre would accommodate 500 displaced persons starting from Tuesday.
General Manager, LASEMA, Adesina Tiamiyu, explained that the camp would be opened for three months after which the government would review the need for an extension, if necessary.