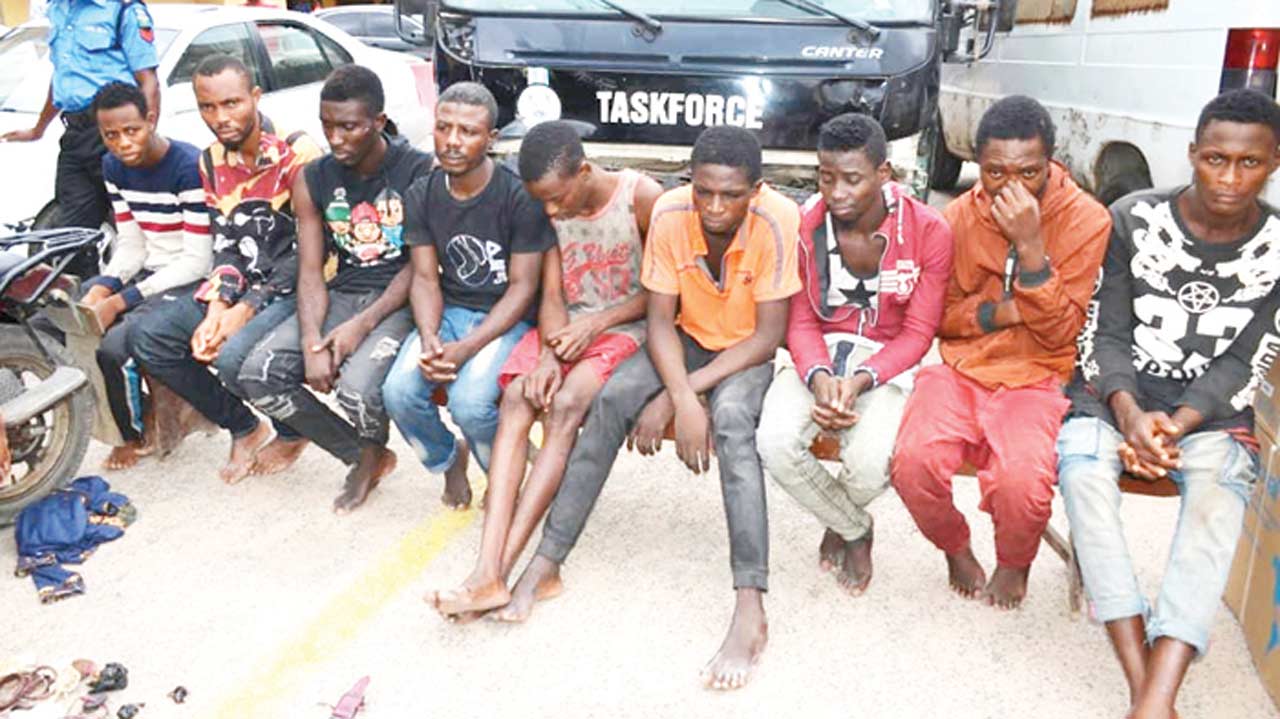 An eight-man robbery gang that has been terrorizing residents of Royal Garden Estate in Ajah area of Lagos State met its waterloo, following the arrest of the suspects by operatives of the Federal Anti-Robbery Squad, (FSARS) attached to the Lagos State Police Command, Ikeja.

Two of them, Nathaniel Emmanuel (22) and Mahmud Usman (36) claimed to be informants to security agents. The gang stormed royal garden at the early hours of yesterday, in two operational motorcycles and a vehicle. Three of them scaled the fence of one of the storey buildings to open the gate for others.

Thereafter, they carried out a flat-to-flat operation where they dispossessed occupants of cash and other valuables worth over N15 million. However, on their way out, a team of FSARS contacted by some of the residents, arrived the scene.

On sighting the operatives, four of them managed to escape in the vehicle, while two others fled into the dark. But the rest whose identities were given as Joseph Paul Aji and Ekpemandu Kingsley, were arrested including their two operational motorbike: a Sinoki Supra motorcycle, with plate number KJA 342 QH.

Commissioner of Police, Lagos State police command, Edgal Imohimi, who confirmed the arrest, disclosed that all the stolen items from occupants of D50, were recovered. He said: “On sighting the operatives, the robbers took to their heels but luck ran against Joseph Paul Aji, 30 and Ekpemandu Kingsley, 22 as they were arrested at the scene.

“During interrogation, they confessed to the crime and led operatives to their hideout where other members of the gang were arrested. Their names are: Abraham Emmanuel a.k.a Turkey, 47; Nataniel Emmanuel a.k.a Nath, 22; Samuel Gabriel, 20; Adamu Salisu, 24; Abdulazeez Garba, 36 and Mahmud Usman, 36.

In an interview with Nathaniel, he said: “I am an informant to the police and some criminals know that. I joined this gang after some friends met me and said he had no money. I told them I could link them up with some people they would work with to get money.

“On that day, we decided to go to an apartment at Royal Garden estate because the occupant had traveled. We went in though the window and collected gold wristwatches, plasma TV and other property. We gave out of it to Mamud Usman, who is also a police informant, for him to keep mum”.

On his part, Mamud who claimed to be an informant to policemen at Ajah, admitted to have collected the plasma television from the gang. He said: “This particular gang is wicked. They killed one of my friends who was an informant. I did not go for the operation with them. They only gave me one plasma TV. The gang threatened to kill me if I exposed them. I regret collecting the plasma television”.

Exhibits recovered from the gang according to Edgal include; one cut to size locally made single barrel gun; one live cartridge and one plier”.
He said the suspects would be charged to court, even as he warned other criminals to leave Lagos in their own interest or have same fate befall them.