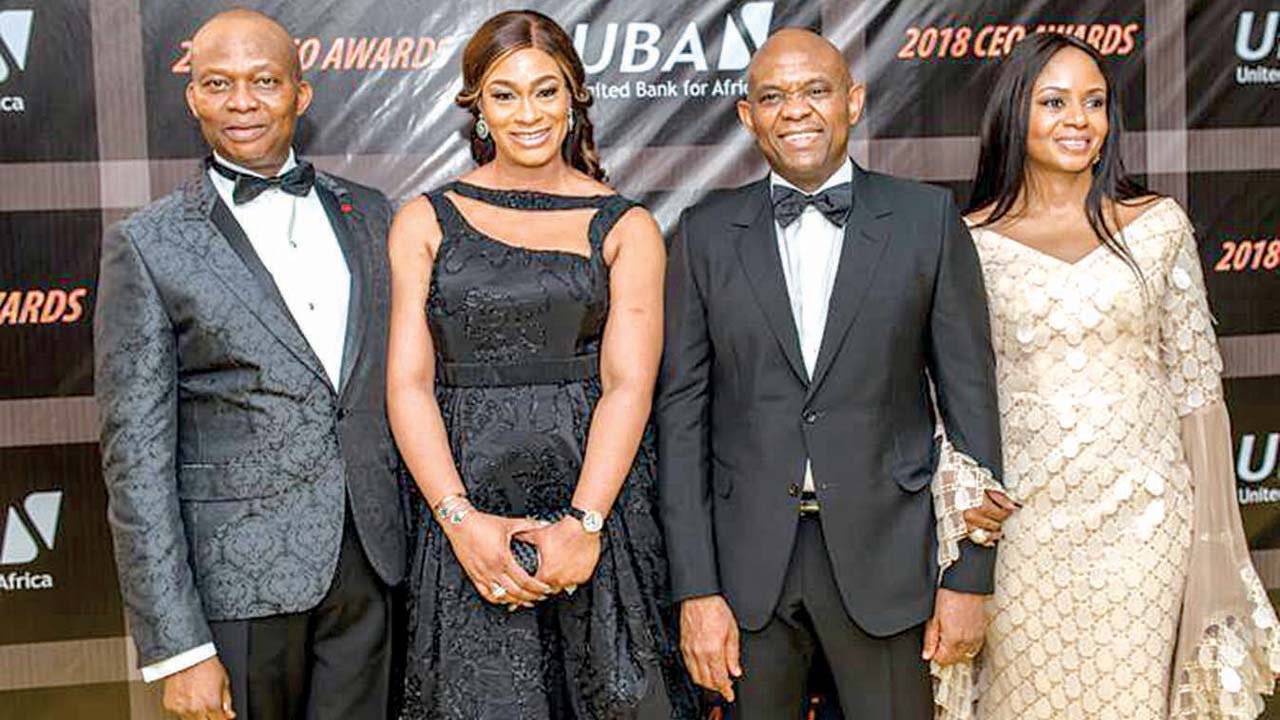 The pan African financial institution, United Bank for Africa (UBA) Plc on Saturday, held the 2018 edition of its Annual CEO awards, honouring staff who performed exceptionally in the past year, at a night of glitz and glamour and away from the usual hustle and bustle, mostly associated with activities in the banking halls.At this year’s edition which was held at the prestigious Eko Hotels and Suites, staff and well-wishers of Africa’s global bank came out in all their finery for some fun and relaxation.

This year’s edition was no disappointment as the bank rewarded high performing staff with various awards amidst a night of fun, laughter and lots of entertainment.The theme of the night – Celebrating Africa – was aimed at celebrating UBA’s rich history and diversity, as well as its core values: Enterprise, Excellence and Execution, and to honour and reward staff who remain key to all that the bank has achieved as one of the biggest and dominant banks since its inception over 70 years ago.

The Chairman, UBA Plc, Mr. Tony Elumelu, accompanied by his wife and Chairperson of Avon Medicals, Awele, said that the bank chose this day to reward staff who had worked hard to ensure that the company remains a leading financial institution on the continent , as seen by the recently released full year results for the 2017 financial year.
He said, “It is a time to reward dignity, hard work, and excellence in execution, and to tell staff that we appreciate what they have been doing and how they have ensured that all the investments put into the bank over the past few years have paid off.”

The Group Managing Director/Chief Executive Officer, Mr. Kennedy Uzoka, who spoke extensively about the banks’ achievements in the past year and prospects of the bank in coming years, commended the staff for their hard work and resilience that has helped the bank remain as Africa’s bank of choice over the years.According to him, the CEO awards is part of what the bank does annually to appreciate the good works and efforts put in by the staff to assist the bank align with its vision and mission.

He added that the bank makes it’s a point of duty to especially appreciate those exceptional staff who have displayed a high level of dedication towards executing their activities in the bank.He said, “Every year, it is our tradition to appreciate our people who have put in their very best and gone far and beyond the call of duty to deliver excellent services to the bank and the customers by extension.

What we are doing tonight is to tell the world that these ladies and gentlemen which are from all our geographies of operation have done so well and contributed immensely to what this bank has achieved in the past year,” he said.

A number of staff were rewarded during the event in various categories for their exceptional activities aimed at improving the bank’s fortunes and creating great experiences for customers. Amongst those who were given awards were the Executive Director, Emeke Iweriebor, MD/CEO UBA Cote d’Ivoire, Sarata Kone, Head Corporate Bank, Muyiwa Akinyemi and Jerome Obada.

While congratulating the recipients of the various awards in different categories, he urged all them as well as other staff to continue to work hard and to do more to justify the confidence given to them.Speaking to the recipients said, “We know that when you have been rewarded, you will be motivated to do more, so I encourage you all to put in your best and remained focus on satisfying the customers which is the reason why we are here.”

“As you may well know, UBA has promoted about 47 per cent of its staff within the last twelve months, and this is something that is very rate in our industry. It is a statement about our commitment to the employees.

Uzoka who spoke on some key achievements of the bank in the year under consideration, including the recent listing of UBA’s shares on the Nigerian Stock Exchange’s Premium Board, noted that a lot of investment has been put into giving customers a great banking experience, and added that more such moves will come onboard.He specifically mentioned UBA’s Artificial Intelligence BOT, Leo, noting that the bank is the first to launch such a service into the African market with the aim of assisting customers to make life much easier for them.

“UBA is the first bank to embrace Artificial Intelligence in serving our customers, this was done bearing in mind the way technology has taken over our lives and in line with our customer first philosophy,” the GMD said.

Great performances by A-list artists such as ‘science students’ crooner, Olamide, Flavor, Kiss Daniels, Styl Plus and Falz the bad guy as well rib-cracking comedy from Basketmouth ensured that staff and guests alike were kept off their seats as they each performed to the massive enjoyment of those present.Ace TV Presenter, IK Osakioduwa and Ayo, were the compere of the event led the guests through a night of fun and laughter and of course lots to eat and drink.