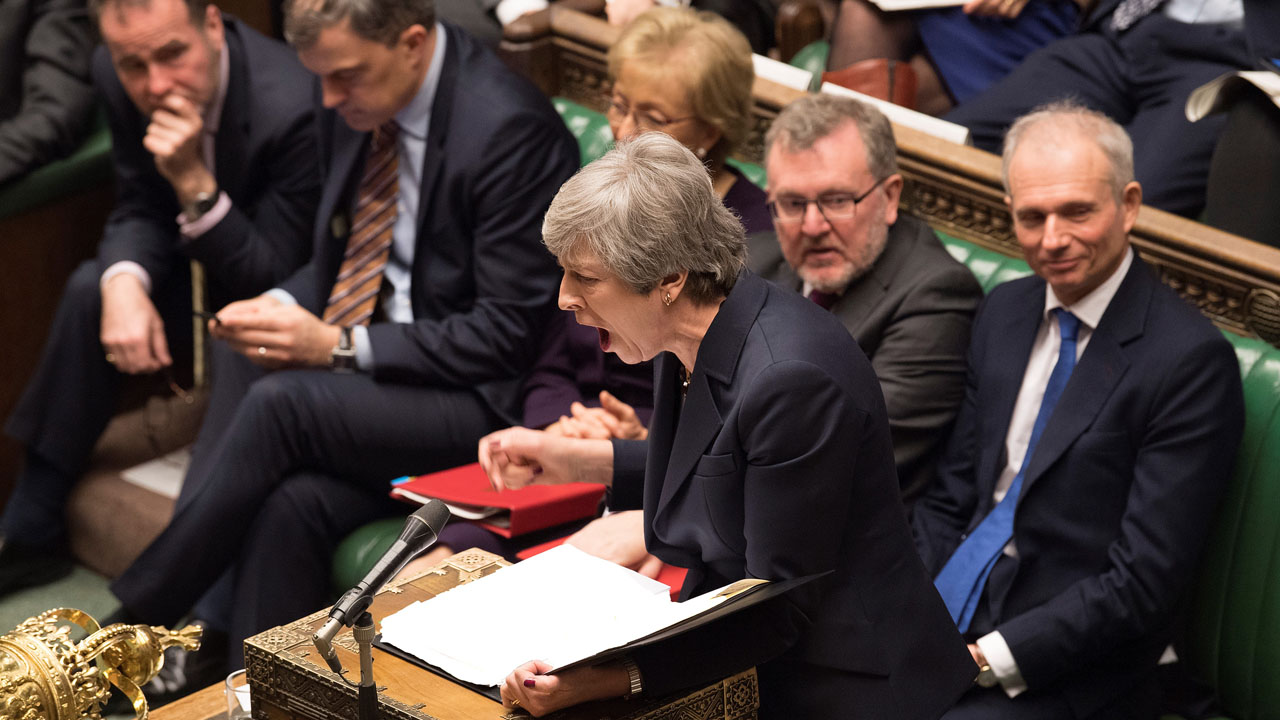 A handout photograph taken and released by the UK Parliament on March 27, 2019 shows Britain’s Prime Minister Theresa May speaking during the weekly Prime Minister’s Questions (PMQs) question and answer session in the House of Commons in London. – Prime Minister Theresa May on Wednesday pledged to step down if MPs back her EU divorce deal, in a bid to break the Brexit deadlock in Britain’s fractured parliament. Her dramatic gambit came just two hours before MPs started a flurry of votes seeking a last-minute alternative Brexit plan to replace her deal. (Photo by MARK DUFFY / various sources / AFP)

MPs are set for a momentous third vote Friday on Prime Minister Theresa May’s Brexit divorce deal, which could end a months-long crisis or risk Britain crashing out of the EU in two weeks.

The House of Commons has twice rejected May’s withdrawal agreement, both times by large margins, but has been unable to agree any alternative — and time is running out.

The pivotal vote takes place on the day Britain was supposed to leave the European Union until May asked the bloc’s leaders last week for a little more time.

In a last-ditch bid to garner the support of discontented Conservative colleagues, she dramatically promised Wednesday to resign if the deal passed.

She appealed to Brexit supporters to back her, saying that under the delay plan hatched with Brussels, approval on Friday could see Britain out of the bloc on May 22.

But if the deal falls again, she must set out a new plan by April 12 — with the options including a potentially catastrophic “no deal” Brexit, or a lengthy delay.

May’s sacrifice swayed some of her critics, including former foreign minister Boris Johnson, but more than a dozen Conservative MPs still publicly oppose her deal.

Her Northern Irish allies, the Democratic Unionist Party (DUP), also continue to insist that its arrangements for the Irish border are unacceptable.

‘Blindfold Brexit’
Without the support of her own side, May would have to rely on opposition Labour votes to get her deal through, but leader Jeremy Corbyn has vowed to vote against her.

Tory minister Andrea Leadsom issued a rallying cry, tweeting that “we can still make the 29th March the day we unite to make leaving the EU a reality.

“I hope colleagues across the House will take this last opportunity.”

The government has decided to put only one part of the Brexit package to MPs, separating out the withdrawal terms from an accompanying political declaration on future ties.

Another vote will be required for Brexit to happen, but a date has not been set.

Labour’s Brexit spokesman Keir Starmer said separating the withdrawal agreement and the political declaration was “not part of a plan, it’s a desperate measure,” that the party would not vote for.

“Take the political declaration off and it’s completely blind, you’ve no idea what you’re really voting for.”

Britain is leaving the EU after 46 years of membership following a divisive 2016 referendum in which voters decided 52 to 48 percent for Brexit.

But MPs appear incapable of agreeing on how to implement the result, reflecting the nationwide divisions that persist on the issue.

The ensuing chaos has led business leaders and trade unions to warn of a “national emergency”, while the pound slipped again on Thursday amid fears of what might happen.

May admits her agreement, reached last November during more than 18 months of negotiations, is a compromise but insists it is the best available.

It covers citizens’ rights, Britain’s financial settlement, plans for the Irish border and for a transition period to ease the split until new trade terms are agreed.

‘Give people certainty’
Ardent Brexit supporters say it keeps Britain too close to the EU, but others say it does not do enough to protect relations with Britain’s largest trading partner.

The crunch vote caps a tumultuous week in Westminster which also saw MPs seize control of parliamentary business for a day to test support for various Brexit options.

However, none of the eight options drawn up by various lawmakers secured a majority, although they are hoping to narrow down the field in another round of votes next Monday.

Any new approach at this point would likely require a much longer extension that would force Britain to take part in European Parliament elections in May.

“The EU will only agree an extension until 22 May if the withdrawal agreement is approved this week,” said Leadsom.

“I encourage all MPs to support it and ensure that we leave the EU… giving people and businesses the certainty they need.”