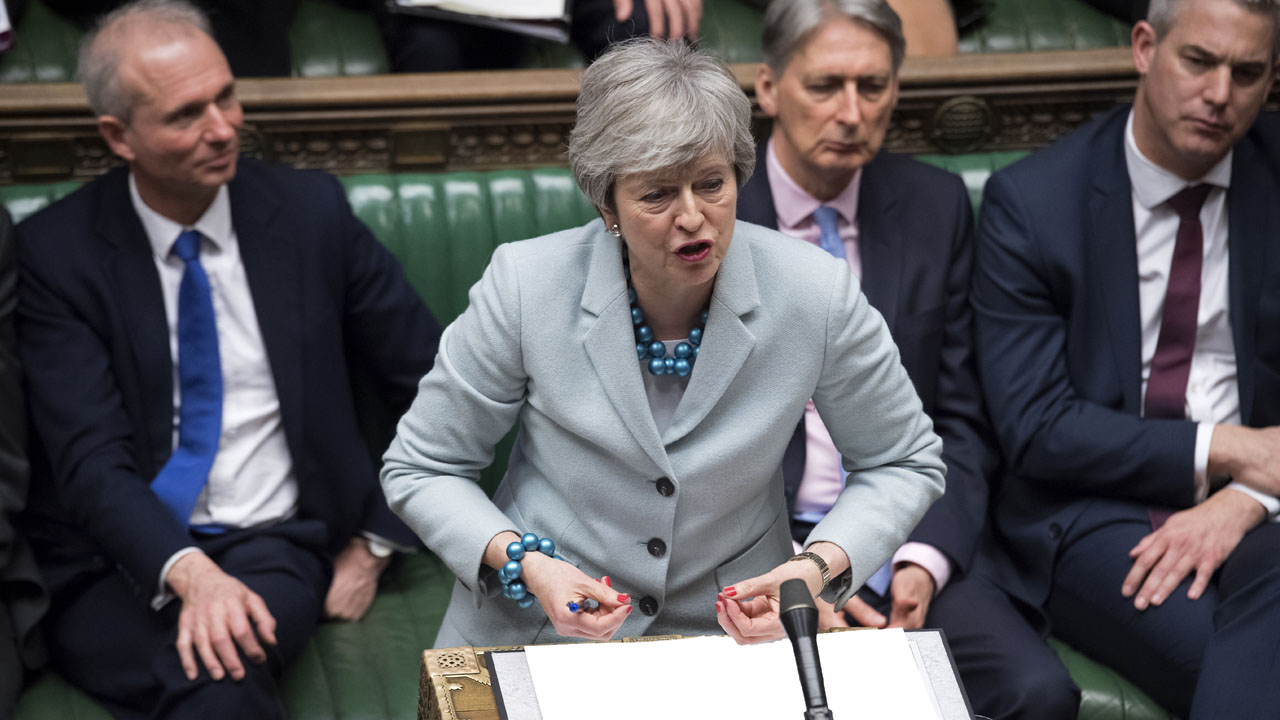 A handout photograph released by the UK Parliament shows Britain’s Prime Minister Theresa May making a statement in the House of Commons in London on March 25, 2019 outlining the next steps that parliament will take in the Brexit process. – Prime Minister Theresa May admitted Monday she had still not secured the votes needed to get her Brexit deal through parliament, raising again the prospect that Britain could crash out of the European Union in two weeks’ time. (Photo by Jessica TAYLOR / UK PARLIAMENT / AFP) /

Britain’s parliament sought a new Brexit strategy Tuesday after seizing the initiative from Prime Minister Theresa May in a historic vote, with the risk of a chaotic “no-deal” departure looming.

Lawmakers exasperated by Britain’s failed efforts to find a way out of the European Union after three years of debates and negotiations voted Monday to give themselves a broader say on what happens next.

The motion creates parliamentary time for MPs to come up with their own Brexit proposals as Britain tries to stave off a messy divorce in two weeks.

The unprecedented measure passed by a 329-302 margin and saw three junior ministers quit the government to vote against the premier.

Richard Harrington said he resigned as business minister because May’s approach and the resulting impasse had left Britain with “a democratic deficit”.

Junior foreign minister Alistair Burt also quit, saying: “We have to come to a conclusion for the country’s sake”.

Starting over
The measure was backed primarily by pro-EU MPs who want to either reverse Brexit or preserve much closer economic relations with the remaining 27 EU states.

But no one is entirely clear about how parliament is going to approach its new role in the week the 46-year UK-EU partnership was scheduled to have to come to an end.

EU leaders pushed back Brexit day to April 12 after meeting May in Brussels last week and deciding that Britain still did not know what it wanted to do.

One of the co-sponsors of the measure to take over the Brexit process from May, Hilary Benn, said lawmakers would first probably get a range of options to choose from on Wednesday.

“The first time round it will just be ‘here are the propositions’ and you vote for as many as you would like,” Benn told BBC radio.

“We may then change the system for next week as we are trying to narrow it down.”

The biggest worry for May is a mooted plan for parliament to then in the following days take an even firmer grip of the Brexit agenda by passing legislation that forces the government’s hand.

Parliament’s initial votes will be non-binding instructions that only carry political weight.

May has already signalled that she might ignore them if they contradict her Conservative party’s 2017 election platform.

It included a vow to take Britain out of the EU customs union and single market — the two vast organisations that open borders and regulate trade across most of the European continent.

But Burt said he resigned precisely because he felt that the “government should adopt any feasible outcome as its own in order to progress matters”.

Rethinking Brexit
Parliament is now effectively re-considering how to go about Brexit all over again.

Everything is back on the table and May’s deal — twice resoundingly rejected by lawmakers this year — is just one of a half-dozen or so approaches that may be up for debate.

May herself admitted “with great regret” Monday that there was “still not sufficient support in the House to bring back the deal for a third meaningful vote”.

Her efforts to bring onside anti-EU rebels in her own party have been fruitless despite months of talks.

But there are some hints that the current political shift could be scaring some of the rebels into line.

Brexit hardliner Jacob Rees-Mogg, head of the European Research Group of eurosceptics, said on Twitter: “The choice seems to be Mrs May’s deal or no Brexit”.

But the tiny Northern Irish party that supports her in parliament, DUP, continues to oppose the agreement and it remains unclear when — or even if — May will bring it back for a vote.

If parliament does beat the odds and adopt the deal, Britain would leave the EU on May 22.