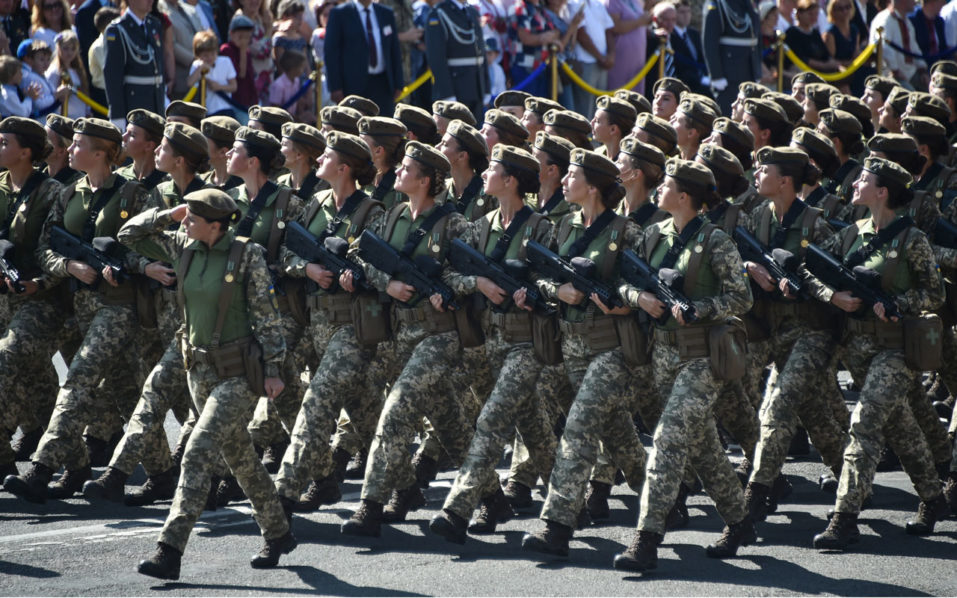 Ukrainian servicewomen march on Kiev central street during a military parade on August 24, 2018, to celebrate the Independence Day, 27 years since Ukraine gained independence from the Soviet Union. Around 4,500 servicemen, including dozens representatives of foreign allies like the United States and Great Britain, saluted Ukrainian President during a military parade. Some 250 pieces of military hardware, including advanced Ukrainian weapons the Bohdana 155-mm self-propelled howitzer and the Vilkha multiple-launch rocket system, were shown to the thousands of spectators who waved Ukrainian blue and yellow flags. / AFP PHOTO / Genya SAVILOV

Ukraine marked 27 years of independence Friday with its biggest ever military parade in central Kiev, as war continues against Russian-backed separatists in the country’s east.

Around 4,500 servicemen, including dozens of representatives of foreign allies such as the United States and Great Britain, saluted Ukrainian President Petro Poroshenko during the demonstration.

Poroshenko used the occasion to argue for the vital role Ukraine plays in defending the borders of Europe.

Without the territorial integrity of Ukraine, “all borders in Central and Eastern Europe will be uncertain”, he said.

“Russia’s war against Ukraine is part of the Kremlin’s plan to ruin the EU and NATO,” the president added.

“I want to stress that Europe needs us, because the EU would be an incomplete project without us.”

Some 250 pieces of military hardware including multiple-launch rocket systems were shown to thousands of spectators, many of them waving Ukrainian blue and yellow flags.

As part of the military show, in which last year just 70 pieces of hardware were displayed, army helicopters and jets flew over Kiev’s main street.

“Glory to Ukraine!” — the controversial slogan of the pro-EU revolution that in 2014 ousted Moscow-backed leader Viktor Yanukovych — was used for the first time as the official military greeting of the Ukrainian army.

“I thank every Ukrainian for the fact that we have stood firm, not just survived, but also built up strong muscles, became stronger,” Poroshenko said in broadcast remarks.

More than 10,000 people have been killed since the Moscow-backed insurgency broke out in eastern Donetsk and Lugansk regions in April 2014 following Russia’s annexation of Crimea from Ukraine.

Ukraine and its Western allies accuse Russia of funnelling troops and arms across the border.

Moscow has denied the allegations despite overwhelming evidence that it has been involved in the fighting and gives open political support to the rebels.