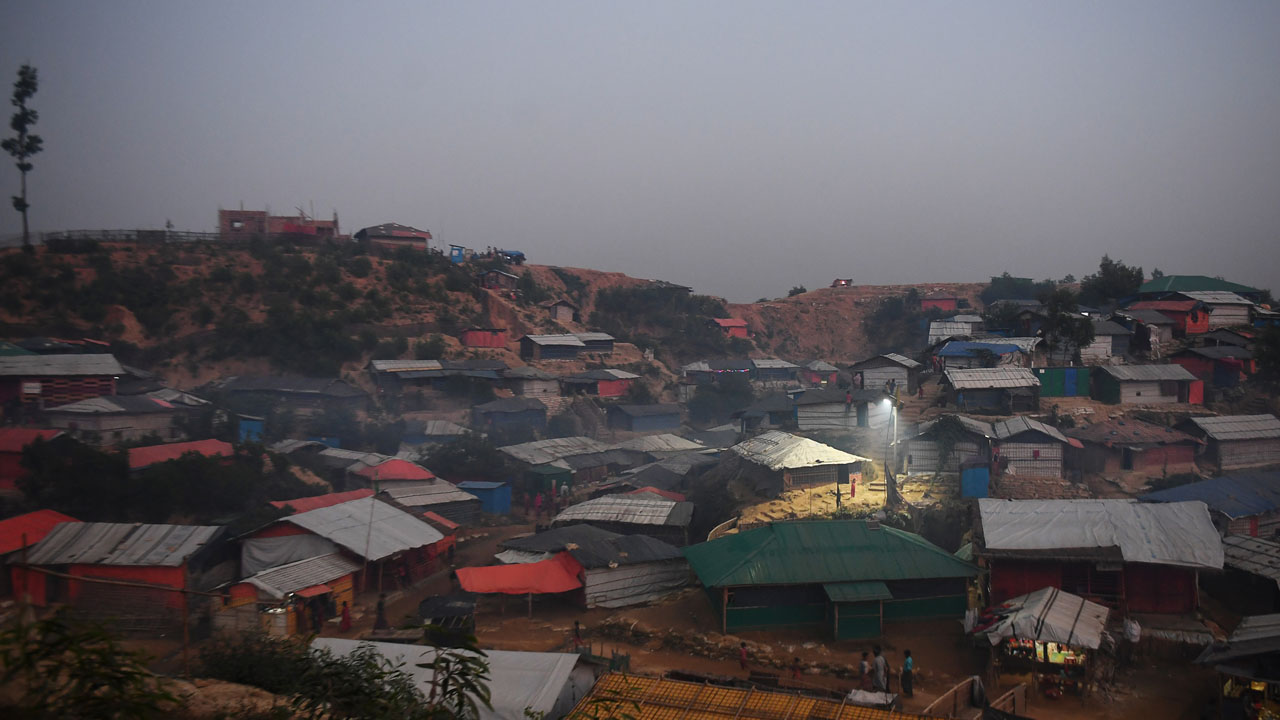 Rohingya refugees walk back to their tent during dusk at Kutupalong refugee camp on November 18, 2018. – Rohingya Muslims were fleeing Bangladeshi refugee camps to avoid being repatriated to Myanmar later this week, community leaders said on November 12. Authorities plan to begin returning Rohingya refugees, who have fled what the UN has called ethnic cleansing, to the Buddhist majority country from November 15. (Photo by Dibyangshu SARKAR / AFP)

The UN has called for calm after several Rohingya Muslims were shot and wounded in a Rakhine state camp, in a raid linked to the failed escape of more than 100 of the stateless minority from the grim settlements.

Some 120,000 Rohingya have languished in displacement camps near Rakhine’s capital, Sittwe, since riots in 2012.

Their movement, access to healthcare, work and education is severely restricted in conditions decried as amounting to apartheid by Amnesty International.

Rohingya refugees who fled a military crackdown to Bangladesh refuse to return to Rakhine without equal rights, citizenship and safety – fearing similar long-term confinement if they do.

In an emailed statement Knut Ostby, head of the UN office in Myanmar, called for “calm, non-violence and restraint” in an area which can be accessed only with official permission — but is believed to suffer from some of the worst conditions in the displacement camps.

One witness said that officers were trying to arrest two Rohingya suspected of links with a boat carrying 106 Rohingya that was found last week off the coast of Myanmar’s biggest city Yangon.

The discovery fuelled speculation of a fresh exodus of Rohingya by boat.

The group, who told reporters they were trying to reach Malaysia, were taken back to Rakhine on Sunday by Myanmar’s navy.

“I am not sure where the police shot but four people got injured and among them, one seriously,” he said.

He added that one of the wounded was sent to Sittwe hospital.

Another man told AFP his son was hit on the left thigh.

For years Rohingya have fled persecution in Myanmar by boat, usually starting around this time of year when the monsoon season ends.

But a crackdown on sea trafficking in 2015 closed the route.

The 720,000 Rohingya living in crowded camps in Bangladesh were last week supposed to begin the complex and controversial process of returning to Myanmar.

But they did not leave Bangladesh after an outcry that conditions in northern Rakhine were still dangerous.

The UN says Myanmar’s generals should be prosecuted for genocide in connection with the army campaign that expelled the Rohingya.

Myanmar has denied almost all claims of abuse and says it was defending itself against Rohingya militants who attacked police posts.