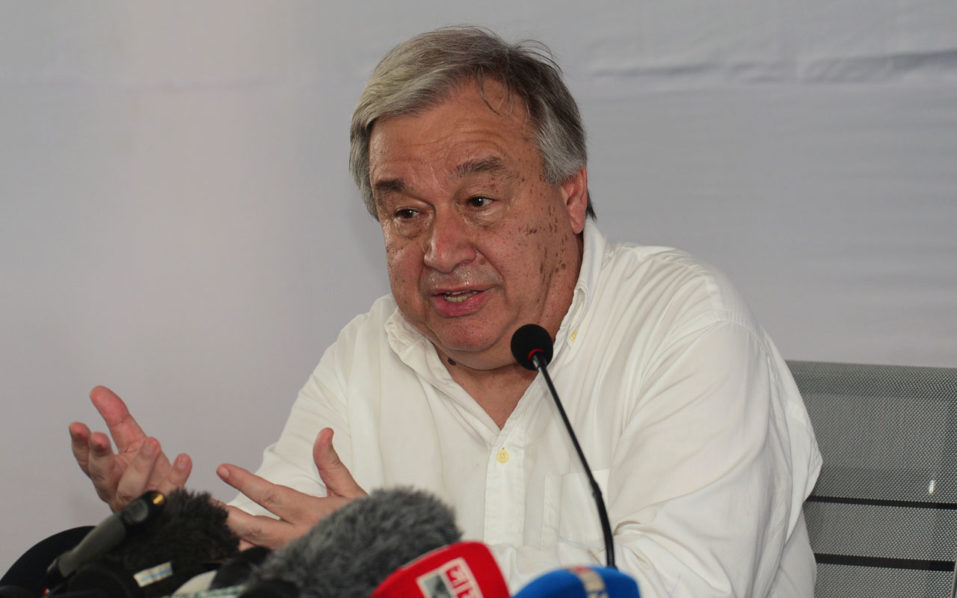 UN Secretary General Antonio Guterres (C) talks during a press conference at the Kutupalong refugee camp after meeting with the Rohingya community in Bangladesh’s southeastern border district of Cox’s Bazar on July 2, 2018. UN Secretary General Antonio Guterres said he heard “unimaginable” accounts of atrocities during a visit July 2 to vast camps in Bangladesh that are home to a million Rohingya refugees who fled violence in Myanmar. / AFP PHOTO / MUNIR UZ ZAMAN

UN Secretary General Antonio Guterres said he heard “unimaginable” accounts of atrocities during a visit Monday to Bangladesh’s refugee camps and called for Myanmar to be held responsible for “crimes” against the Rohingya.

Guterres described the situation for the persecuted Muslim minority as “a humanitarian and human rights nightmare” before touring makeshift shelters crammed with people who escaped a huge Myanmar army operation last year that the UN has likened to ethnic cleansing.

The UN chief heard harrowing testimony of rape and violence from refugees living in the crowded camps, where nearly a million Rohingya have sought refuge from successive waves of violence in Myanmar.

“It is probably one of the most tragic, historic, systematic violations of human rights,” Guterres told reporters in Kutupalong camp, the world’s largest refugee settlement.

“Sometimes people tend to forget who is responsible for what happened. So let’s be clear where the responsibility is — it is in Myanmar.

“But it’s true the whole international community was not able to stop (it). The responsibilities of the crime committed in Myanmar needs to be attributed to those who committed those crimes.”

The level of “unparalleled” suffering created “an obligation to put pressure on Myanmar for the situation to change there”, Guterres added.

The bulk of the Rohingya in Bangladesh, or some 700,000 people, flooded across the border last August to escape the violence.

They are loathed by many in Myanmar, where they were stripped of citizenship and branded illegal immigrants from Bangladesh, despite calling Rakhine state their homeland.

Guterres, accompanied by World Bank head Jim Yong Kim, said he heard “unimaginable accounts of killing and rape” during his first visit to the Rohingya camps as UN chief.

– ‘Heartbreaking’ –
“Nothing could’ve prepared me for the scale of crisis and extent of suffering I saw today,” Guterres said on Twitter.

“I heard heartbreaking accounts from Rohingya refugees that will stay with me forever.”

Kim said the hardship in the camps was “one of the most disturbing situations we’ve ever seen”.

“I was appalled, but the entire world should be appalled by what we’re seeing,” he said.

A UN Security Council delegation visited Myanmar’s Rakhine state in early May, meeting refugees who gave detailed accounts of killings, rape and villages torched at the hands of the military.

Myanmar has vehemently denied allegations by the United States, the UN and others of ethnic cleansing.

Bangladesh and Myanmar agreed in November to begin repatriating the Rohingya but the process has stalled, with both sides accusing the other of frustrating the effort.

Fewer than 200 have been resettled, and the vast majority refuse to contemplate returning until their rights, citizenship and safety are assured.

Around 100 Rohingya staged a protest just before Guterres’s visit, unhappy about a preliminary UN deal with Myanmar to assess conditions on the ground for their possible return home.

Mohibullah, a community leader for the displaced minority, said he raised concerns with Guterres about the UN agreement not referring to the Rohingya by name.

Myanmar refers to the Rohingya as “Bengalis” as it does not recognise the Muslim group as native to the country.

Guterres said the preliminary deal was a “first step” towards securing “progressive recognition of the rights of these people”.

The United Nations has said that conditions in Rakhine are not conducive for the refugees’ safe, voluntary and dignified repatriation.

Guterres thanked Bangladesh, an impoverished nation of 160 million prone to natural disasters, for opening its doors to the Rohingya.

“That is a lesson for many countries that are much more developed, see a few thousand people coming, and close the borders,” he said.