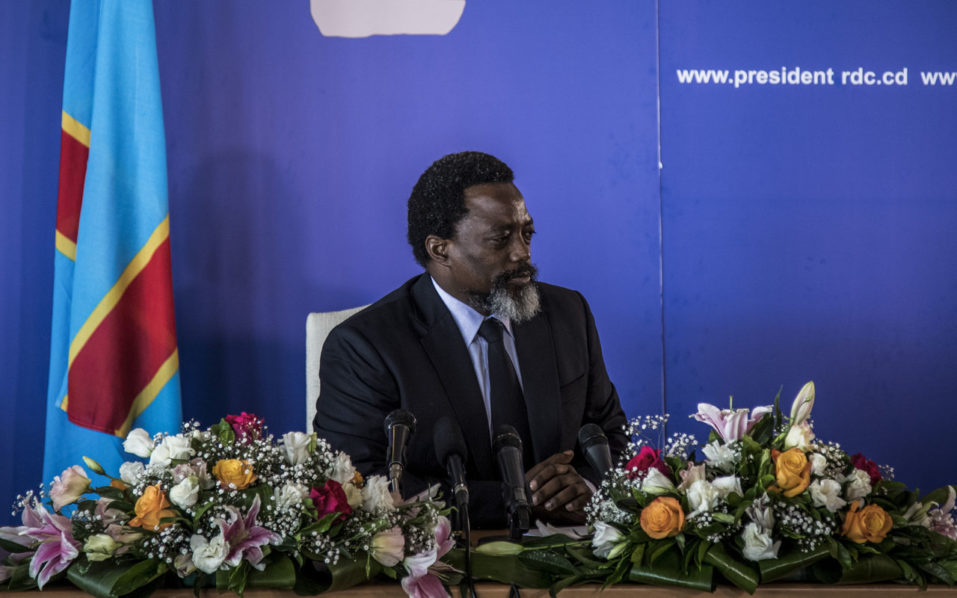 (FILES) In this file photo taken on January 26, 2018 President of the Democratic Republic of Congo, Joseph Kabila, holds a press conference for the first time in five years in Kinshasa.Kabila, 47, has been at the helm since 2001, presiding over a vast mineral-rich country with a reputation for corruption, inequality and unrest. He was scheduled to stand down at the end of 2016 after his second elected term, technically the last permitted under the constitution. Kabila has refused to spell out whether he will seek a new term in the vote. The DRC has never known a peaceful transition of power since it gained independence in 1960 — and some experts fear that the December 23 elections may trigger a bloody conflict. / AFP PHOTO / THOMAS NICOLON

The UN Security Council on Monday welcomed President Joseph Kabila’s decision to not seek re-election in the Democratic Republic of Congo and said the polls must now lead to a peaceful transfer of power.

In power since 2001, Kabila last week appeared to bow to international pressure when his governing coalition picked Emmanuel Ramazani Shadary as its presidential candidate in the December 23 vote.

The council said in a statement drafted by France that it “welcomed President Joseph Kabila’s respect for his commitment to abide by the Congolese constitution”.

Council members said the “entire Congolese political class and the institutions responsible for organizing elections” must remain “committed to ensure the success of the rest of the electoral process, leading to a peaceful transfer of power.”

The United States, France and Britain had urged Kabila to state clearly that he would not seek another term amid fears that his failure to step aside could trigger violence.

The DR Congo has never known a peaceful transition of power since independence from Belgium in 1960.

The Security Council is planning to visit the DR Congo before the elections, possibly in October.