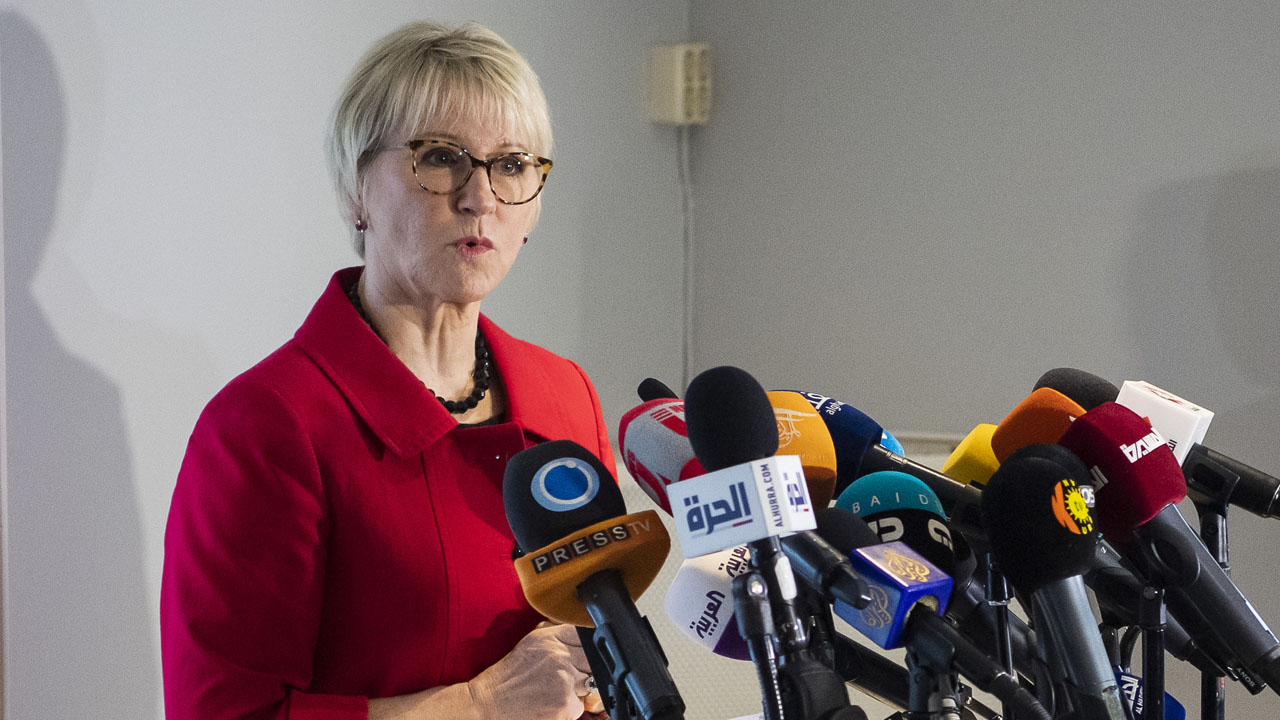 Sweden’s Minister for Foreign Affairs, Margot Wallström, addresses members of the media at Johannesberg Castle in Rimbo, north of Stockholm, Sweden, on December 13, 2018, where peace talks on Yemen take place. – The UN talks opened last week in Sweden, the first meeting in two years between Yemen’s Huthi rebels and the government of President Abedrabbo Mansour Hadi, backed since 2015 by a behemoth military coalition led by Saudi Arabia. (Photo by Jonathan NACKSTRAND / AFP)

UN chief Antonio Guterres led his mediators Thursday in a last-minute push for a truce in the Yemen war as rebels and the government wrangled over a key port and airport.

International pressure is mounting to halt the fighting between the Iran-linked Huthis and the government of Abedrabbo Mansour Hadi, backed by Saudi Arabia and its military allies.

The conflict has triggered what the UN calls the world’s worst humanitarian crisis, with 14 million Yemenis now at the brink of mass starvation.

The warring parties have been in the rural Swedish village of Rimbofor UN-brokered talks, now in their seventh day, working for an agreement on key issues including a cessation of hostilities in Hodeida port, the main entry point for imported food and aid.

A source inside the talks said mediators remained “positive” although there was “disagreement on the points of the proposals”.

Sources in both delegations said no agreement had been reached Thursday morning on both Hodeida and Sanaa airport, which has been closed to commercial flights for nearly three years, and traded mutual accusations of non-cooperation. The four sources requested anonymity as they were not authorized to brief the press.

The rebels control both the Red Sea Hodeida port and the capital Sanaa. The Saudi led-military coalition controls Yemen’s maritime borders and airspace.

UN special envoy Martin Griffiths, who brokered the talks, was expected to brief the Security Council on Yemen on Friday.

Anger at the human cost of the war, as well as outrage over the killing of US-based journalist Jamal Khashoggi in the Saudi consulate in Istanbul, have prompted a harder line in the international community over the Yemen war, and particularly the role of the Saudi-led coalition.

The US Senate on Wednesday greenlighted a vote that could end US military support for Riyadh’s war in Yemen.

The Senate voted to advance the resolution that ends US backing for the Saudi-led intervention in Yemen by 60 votes to 39, with 11 Republicans joining Democrats to back the measure.

The final vote is expected to take place on Thursday. However, if the upper house approves the resolution, it is likely to run aground in the lower House of Representatives where Republicans hold the majority until January 3.

The Sweden talks mark the first meeting in two years between the northern Huthi rebels and the Hadi government that has been backed since 2015 by the Saudi-led coalition.

The last round of talks, hosted by Kuwait in 2016, collapsed after more than three months of negotiations with no breakthrough.