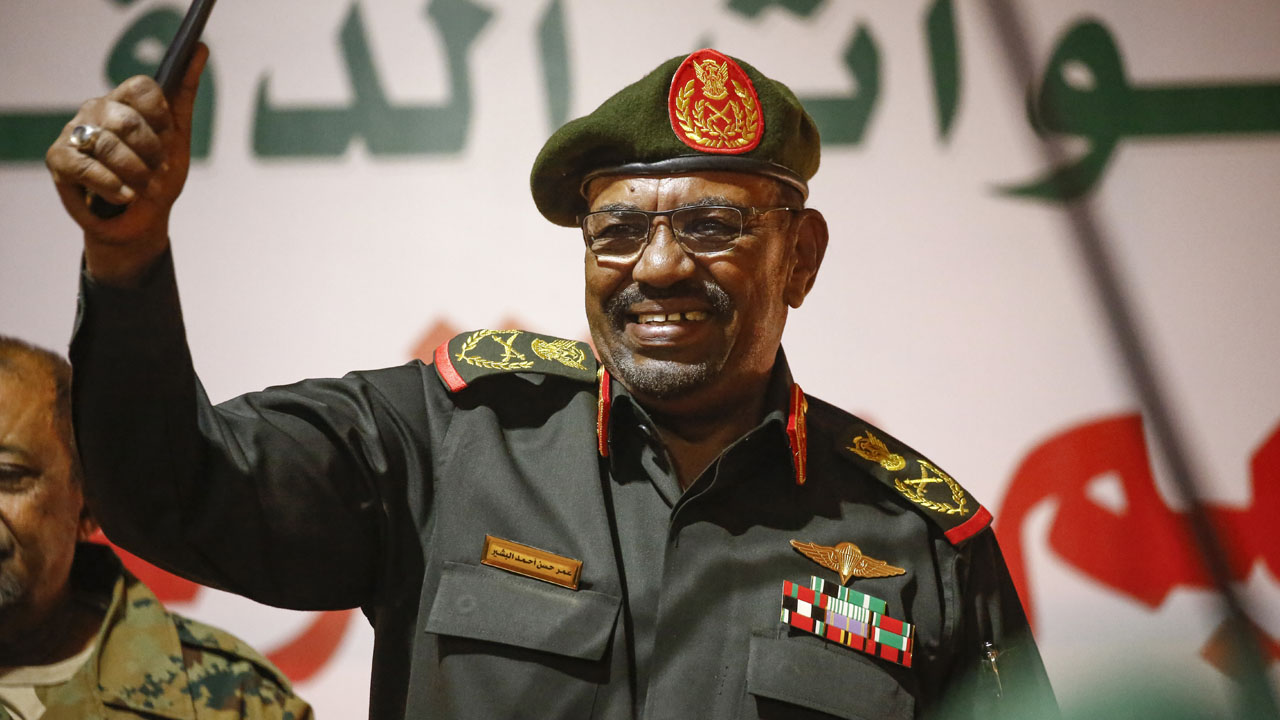 Sudanese President Omar al-Bashir gestures with his walking cane as he addresses members of the Popular Defence Force (PDF), a paramilitary group, in the capital Khartoum on February 12, 2019. – The PDF is a type of reserve unit that has frequently fought on the side of Sudanese armed forces against ethnic minority rebels in the country’s war zones of Darfur, Blue Nile, and South Kordofan. (Photo by ASHRAF SHAZLY / AFP)

Sudanese President Omar al-Bashir, who has faced weeks of protests against his three-decade rule, pledged to promote peace in the country’s war zones in an address to paramilitary units on Wednesday.

“I assure you that the year 2019 will be the year of peace in Sudan,” the president told members of the Popular Defence Force (PDF), a paramilitary unit that has been widely used to fight longstanding rebellions in Darfur and in regions near the South Sudan border.

His remarks came weeks after he extended ceasefires in Blue Nile and South Kordofan states, where troops and paramilitaries have been battling rebels with pre-independence links to South Sudan.

“We want you to go to the war zones, not for fighting but for building schools and health centres,” Bashir said.

The paramilitaries of the PDF are civilians, many of them young students. Before South Sudan broke away in 2011, they played a major role in the brutal decades-long civil war against the independence movement.

The PDF has also fought in Sudan’s western region of Darfur, where ethnic minority rebels took up arms in 2003, drawing a scorched response from the government that prompted war crimes charges against Bashir from the International Criminal Court.

The president has repeatedly denied the charges, which also include genocide and crime against humanity.

Tens of thousands of people have been killed in the three conflicts and millions displaced, despite the longstanding deployment of a UN-African Union peacekeeping force in Darfur.

Since December, the 75-year-old Bashir has faced near-daily protests in the Sudanese heartland calling for his resignation, that analysts say pose the greatest challenge to his iron-fisted rule since he took power in an Islamist-backed coup in 1989.

Officials say 30 people have died in protest-related violence. Human Rights Watch has said at least 51 people have been killed.

Anger that had been mounting for years over growing economic hardship and deteriorating living conditions has boiled over onto the streets, under the slogan: “Freedom, peace, justice!”

Bashir has remained defiant, insisting the ballot box is the only way to change the government and vowing to stand for a third term in an election scheduled for next year.