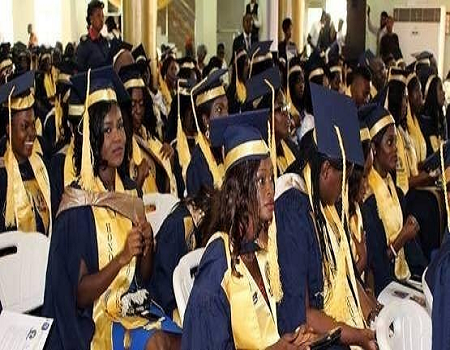 The University of Port Harcourt (UNIPORT) will on Saturday graduate 9,452 students with 106 of them bagging First Class degrees.

Prof. Ndowa Lale, the Vice-Chancellor of the university,  disclosed this at a news conference on Monday in Port Harcourt as part of programmes to mark the 32nd Convocation Ceremony of the institution.

Lale said the conferment of degrees, higher degrees, diploma, certificates, and prizes would hold at the university from March 29 to March 30.

According to him, the convocation was mainly for students who finished their academic programmes for the  2016/2017 and 2017/2018 academic sessions.

“Also, a total of 70 will receive Bachelor of Pharmacy degrees; 105 will be admitted into Bachelor of Medicine and Bachelor of Surgery while 26 students get Bachelor of Dental Surgery degree,” he said.

Lale said no fewer than 4,681 students would also be conferred with the Doctor of Philosophy degree, Master’s degree, and Postgraduate Diploma in various specialization and programmes.

Others were School of Science Laboratory Technology (SSLT) and College of Health Sciences.

“The Minister of Science and technology, Dr Ogbonnaya Onu will deliver a convocation lecture on March 28 entitled: “ Higher Education as a Driver of Economic Recovery and Growth Plan of a Nation.’’

“UNIPORT will continue to produce quality graduates that will compete favorably with their counterparts locally and internationally,” he said.

Lale said that since he took office in 2015,  several programmes had been introduced with the focus of making UNIPORT a world-class university in academics, research, and development.

He said that students and lecturers now take attendance to class and other academic work seriously due to stringent measures introduced in the university.

“We have completed rehabilitation of 15 hostel accommodation and nine lecture halls and classrooms in collaboration with the National Economic Empowerment and Development Strategy (NEEDS).

“Also, 16 of the 32 housing units that we initiated at the University Park have now been completed and allocated to staff.

“I am also pleased to announce that all the programmes offered in UNIPORT now enjoy full accreditation status – thanks to the quality of our academic programmes and personnel,” he added.

The vice chancellor said that UNIPORT would continue to play a leading role in research and development in order to solve practical problems of industries and the larger society.