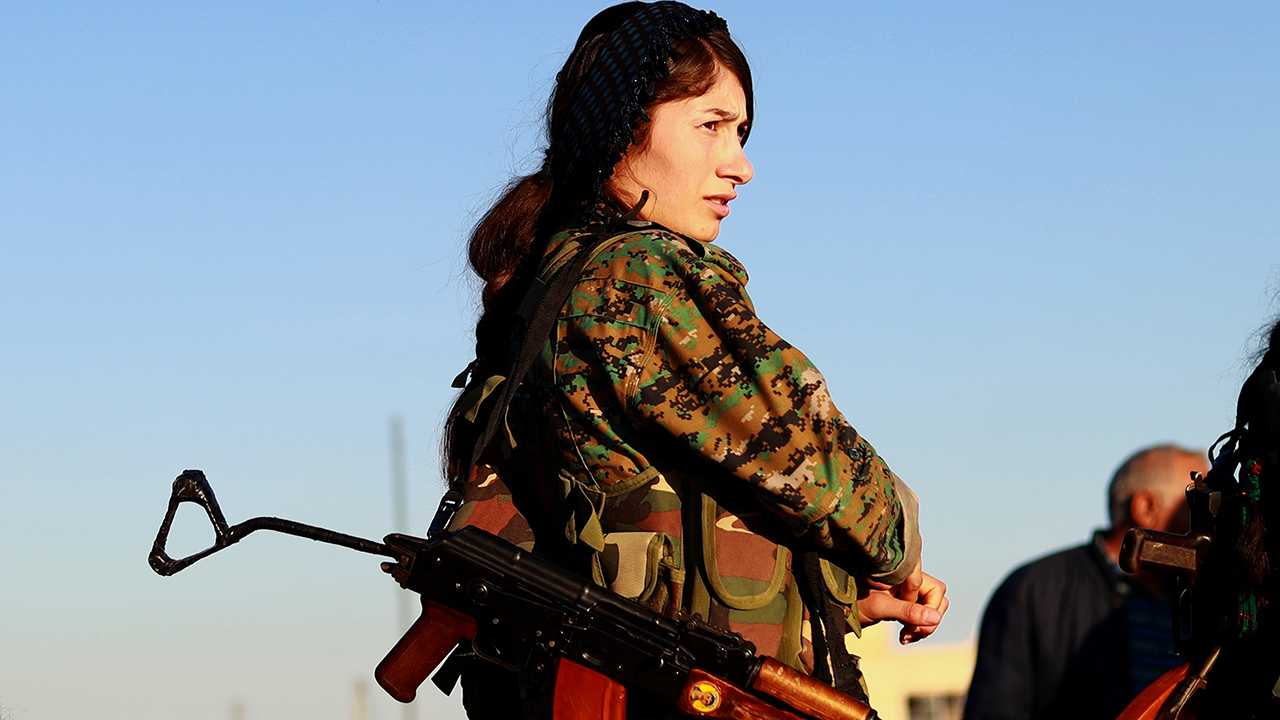 A fighter from the Syrian Democratic Forces (SDF) attends the funeral of a commander, killed a day earlier in the town of Hajin during battles against the Islamic State (IS) group, in the Kurdish-controlled city of Qamishly in northeastern Syria, on October 29, 2018. – The Islamic State group ousted a US-backed coalition of Kurdish and Arab forces from its holdout in eastern Syria on October 28, killing dozens of fighters, a monitoring group said. (Photo by Delil SOULEIMAN / AFP)

A Kurdish-led force backed by a US-led coalition on Wednesday suspended operations against the Islamic State group and said they would not resume until Turkey halts its attacks on Kurdish militia posts in northern Syria.

The SDF condemned what it called the “coordination” of Turkey’s attacks with a fightback by jihadists and warned of “a prolonged halt to our military operation” against IS if Ankara keeps up its strikes.

Hundreds of Kurdish civilians, carrying party flags and portraits of jailed Turkish Kurdish separatist leader Abdullah Ocalan, demonstrated in the streets of the northeastern city of Qamishli to denounce the Turkish attacks.

“These attacks serve to support the mercenaries” of IS, said a protester, 44-year-old teacher Rizan Hamo. “The international community and the world must stop the Turkish state.”

Backed by coalition air strikes, the SDF aims to expel IS from a holdout on the Iraqi border, but the jihadists staged a fierce fightback last week under the cover of a sand storm, using suicide bombings to force a retreat.

According to the Syrian Observatory for Human Rights, the IS counter-attack killed at least 72 fighters from the SDF, which is dominated by the Kurdish People’s Protection Units (YPG).

The monitoring group said hundreds of Kurdish fighters, men and women, had since been deployed on the outskirts of the IS holdout of Hajin.

But, the Britain-based monitor said Wednesday, “on the ground, everything has come to a halt”.

On Tuesday, two days after another round of shelling of Kurdish posts in northern Syria, Turkey’s President Recep Tayyip Erdogan said his country had completed preparations for a new operation to “destroy” the YPG militia, which Ankara has branded a terrorist group.

“We are going to destroy the terrorist structure in the east of the Euphrates. We have completed our preparations, plans, programmes regarding this issue,” said Erdogan, who has made similar threats in the past.

The YPG has worked closely with the United States in the fight against IS jihadists in Syria, straining ties between NATO allies Washington and Ankara.

The animosity between Syria’s Kurds and Turkey underlines the complexity of the multi-front Syrian conflict that has cost over 360,000 lives since it broke out in 2011 with anti-government protests that were violently suppressed by the regime.

Earlier this year, Turkish military forces supported Syrian opposition fighters in seizing the Afrin region, west of the Euphrates, from the YPG in a two-month air and ground offensive.

Ankara previously launched an offensive between 2016 and 2017 against IS on its border with Syria, as well as blocking the YPG from linking up areas under its control.