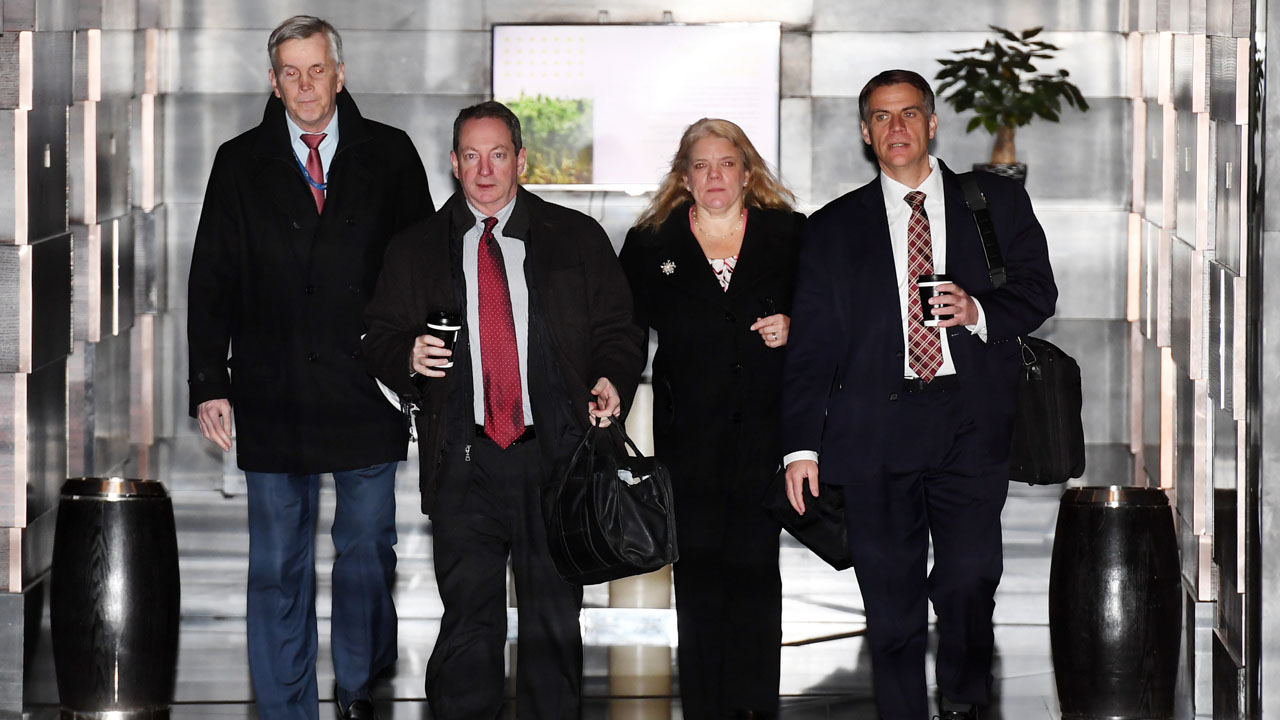 Members of a US negotiation team leave a hotel for the second day of talks in Beijing on January 8, 2019. – The US delegation in Beijing includes officials from the Treasury, Commerce, Agriculture and Energy departments. The talks come a month after US President Donald Trump and his Chinese counterpart Xi Jinping agreed to suspend a planned tariff hike for three months to give negotiators space to reach an agreement and end a dispute that has roiled world markets. (Photo by GREG BAKER / AFP)

The United States and China concluded on Wednesday three days of extended talks to resolve their trade war, with a member of the American delegation saying negotiations “went just fine”.

The US officials arrived in Beijing on Monday for the first sit-down talks since President Donald Trump and Chinese leader Xi Jinping agreed on December 1 to a three-month truce on a tit-for-tat trade spat.

Asian markets rose on increasing optimism that the two sides would be able to hammer out a deal ahead of a March deadline and avert further import tariff hikes.

A member of the US delegation, Under Secretary for Trade and Foreign Agricultural Affairs Ted McKinney, told reporters that the team would return to the United States later on Wednesday.

“I think they went just fine,” McKinney said of the talks as he left the hotel with his luggage, adding the trip “has been a good one for us”.

Trump boasted on Twitter on Tuesday that discussions in China were “going very well!”

China’s foreign ministry confirmed the negotiations had ended in Beijing but declined to comment on the outcome, saying details would be released later.

“If it’s a good outcome, it doesn’t just benefit the US and China, but it is also good news for the world economy,” said foreign ministry spokesman Lu Kang.

The US delegation, led by Deputy Trade Representative Jeffrey Gerrish, had been scheduled to end its visit on Tuesday.

“The extension of the talks indicate that both sides take this very seriously,” Lu said.

Washington has been clamouring for an end to the alleged forced transfer — and even theft — of American technology, as well as steep government subsidies for Chinese companies.

‘Encouraging words’
US Commerce Secretary Wilbur Ross signalled in a CNBC interview on Monday that there was a “very good chance” of reaching an agreement.

China’s economy was more vulnerable to the fallout from the trade war, he said, noting that Beijing exports more goods to the United States than the other way around.

“I don’t speak for them obviously,” Cook said in reference to the Trump administration. “I do talk with them and I give them my ideas and thoughts.”

The US smartphone maker has felt the pinch of the bruising trade spat, and warned that 2018 revenues would miss its forecast — in large part due to a slump in iPhone sales in China.

The temporary trade-war ceasefire came after the two sides imposed import duties on more than $300 billion of each other’s goods.

Without a resolution, punitive US duty rates on $200 billion in Chinese goods are due to rise to 25 percent from 10 percent on March 2.

The current trade round coincided with an unannounced visit from North Korean leader Kim Jong Un, who arrived in Beijing on Tuesday for talks with Xi in Beijing ahead of a possible second meeting between Kim and Trump.

China — Pyongyang’s sole diplomatic ally and main source of trade — said it would not use Kim’s visit as a bargaining chip in the US trade talks.

Kim’s train left Beijing on Wednesday around the same time the US trade negotiators headed for the airport.