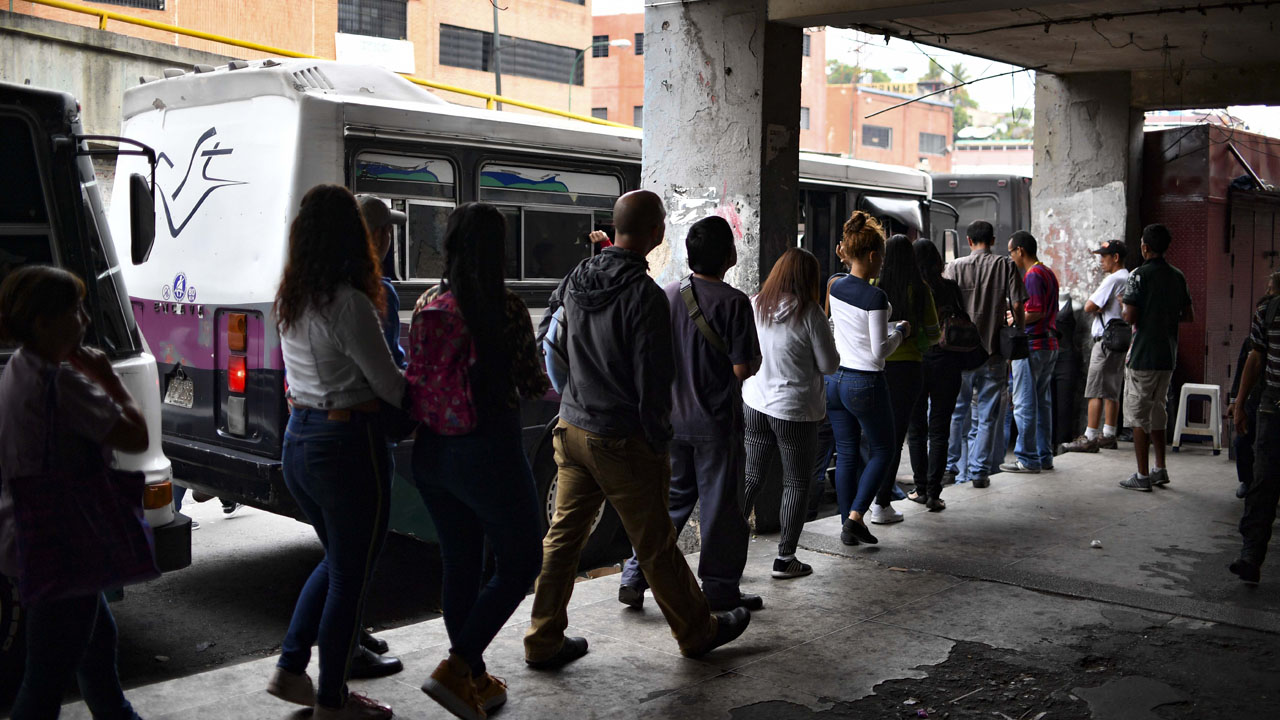 People board a bus at a bus station in Petare during a power outage in Caracas on March 26, 2019. – A new blackout swept across Venezuela on Monday, including much of Caracas, sowing alarm two weeks after a nationwide outage that paralyzed the country. (Photo by Yuri CORTEZ / AFP)

Venezuela decreed a holiday Tuesday to cope with a new near-nationwide blackout that the government alleged was caused by an “attack” targeting its main hydroelectric plant.

Caracas and other cities were without power, knocking out public transport, water supplies and leaving buildings without generators — including many hospitals — plunged into gloom.

In the capital, streets were largely empty. There were lines for the very few buses running, but subway stations were closed, the underground trains stalled on their tracks. Shops were shuttered.

The outage began in the middle of Monday, sparking fear and frustration as citizens confronted anew the same paralysis that gripped the country just two weeks ago, in a vast blackout that lasted a week.

Lights came on briefly overnight, then cut out hours later, including at the main international airport outside Caracas, where passenger check-ins were being done by hand for lack of computers.

The government declared Tuesday a work-free and school-free day to take a load off the grid.

“We have been victims of an attack against the electricity generation and distribution system, and specifically against the Guri plant,” a giant hydroelectric facility that supplies power to 80 percent of Venezuela’s 30 million inhabitants, Communications Minister Jorge Rodriguez told state television.

He blamed the opposition, led by Juan Guaido who is recognized by the United States and allied countries as Venezuela’s interim president.

NetBlocks, an organization that monitors the internet, said it had detected a “severe impact” to the telecoms network across 18 of Venezuela’s 23 states.

A degraded grid
In the last blackout, President Nicolas Maduro also had said the Guri plant was targeted. Then, he accused the United States of launching a “cybernetic” attack against it, and accused the opposition of being behind acts of “sabotage.”

In that March 7-14 outage, more than a dozen patients in hospitals died, production slowed in the vital oil sector and water supplies were interrupted, forcing citizens to turn to sewage outflows and polluted water sources.

Analysts said that while a US attack was possible it was unlikely.

They said years of underinvestment, poor management and corruption was the more likely culprit and they predicted more power cuts would follow.

Guaido rejected the government’s accusations against him, saying he had information from workers in the state electricity company Corpoelec that “an overload of some transformers” was to blame.

“When our people need certainty in the middle of another unsettling blackout, how can they go on repeating excuses of an ‘electricity war’ and sabotage?” he tweeted.

“Who are they accusing this time? ET?” went one tweet.

They “are going to announce that a UFO sent by Trump and Venezuela’s right-wing launched an electromagnetic attack with extra-galactic weapons,” said another.

One parody image posted online depicted the Guri dam being assaulted by a giant octopus.

In the streets, Venezuelans appeared midway between rage and resignation.

“Here, nobody tells the truth. The media don’t tell the truth. And we’re prevented from doing our work,” said Yoan, an electrician wiring up a frozen yogurt shop

Rafael, at work in a printing shop where all the machines had come to a stop, accused the government of “not doing repairs” to the power grid.

“They give so many warnings about the network being damaged and they do nothing,” he said.

For ordinary Venezuelans, the successive power cuts were one more indignity in a country where food and medicine have become scarce, the money decimated by runaway inflation, and the political system locked in a power struggle.

While some Venezuelans expressed hope that US backing for Guaido might bring change, the geopolitical tussle over impoverished but oil-rich Venezuela suggested it would not come quickly.

Russia, Venezuela’s main ally and one of its biggest creditors along with China, on the weekend sent 100 troops and military equipment aboard two flights to Caracas.

Moscow said it would not tolerate a US-supported “coup” it alleged was brewing.

Washington hit back, warning that it will not “stand idly by as Russia exacerbates tensions in Venezuela.”