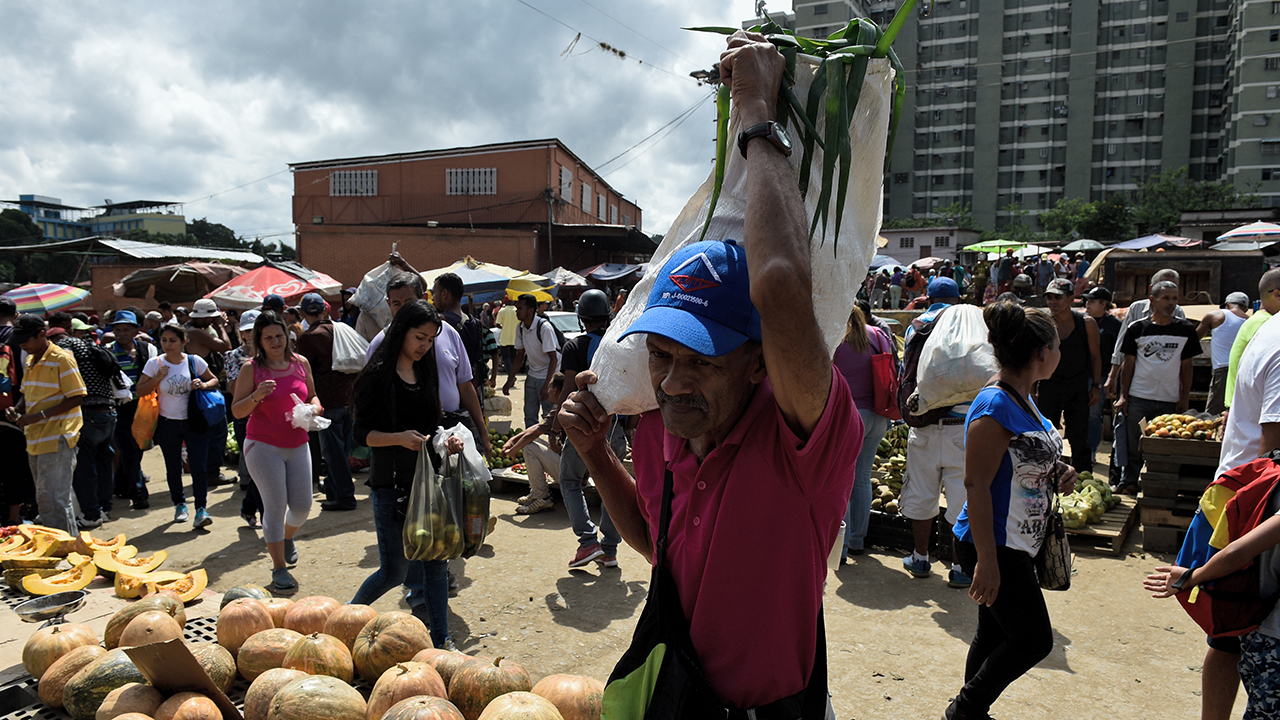 People buy groceries at the municipal market of Coche, a neighbourhood of Caracas, on August 18, 2018 ahead of Monday, when Venezuela will start issuing new banknotes after slashing five zeroes off the crippled bolivar.<br />Uncertainty reigned in Venezuela on Saturday after President Nicolas Maduro unveiled a major economic reform plan aimed at halting the spiraling hyperinflation that has thrown the oil-rich, cash-poor South American country into chaos. / AFP PHOTO / Federico PARRA

Uncertainty reigned in Venezuela on Saturday after President Nicolas Maduro unveiled a major economic reform plan aimed at halting the spiraling hyperinflation that has thrown the oil-rich, cash-poor South American country into chaos.

Ahead of a major currency overhaul on Monday, when Caracas will start issuing new banknotes after slashing five zeroes off the crippled bolivar, Maduro detailed other measures he hopes will pull Venezuela out of crisis.

Those measures — revealed in a speech to the nation late Friday — include a massive minimum wage hike, the fifth so far this year.

But analysts say the radical overhaul could only serve to make matters worse.

“There will be a lot of confusion in the next few days, for consumers and the private sector,” said the director of the Ecoanalitica consultancy, Asdrubal Oliveros.

– ‘Pure lie!’ –
The embattled Maduro, a former bus driver and union leader, said the country needed to show “fiscal discipline” and stop the excessive money printing that has been regular in recent years.

The new currency, the sovereign bolivar — to distinguish from the current, and ironically named, strong bolivar — will be anchored to the country’s widely discredited cryptocurrency, the petro.

Each petro will be worth about $60, based on the price of a barrel of Venezuela’s oil. In the new currency, that will be 3,600 sovereign bolivars — signaling a massive devaluation.

In turn, the minimum wage will be fixed at half a petro (1,800 sovereign bolivars), starting Monday.

That is about $28 — more than 34 times the previous level of less than a dollar at the prevailing black market rate.

Maduro also said the country would have one fluctuating official exchange rate, also anchored to the petro, without saying what the starting level would be.

As it stands, the monthly minimum wage — devastated by inflation and the aggressive devaluation of the bolivar — is still not enough to buy a kilo of meat.

In the capital Caracas, residents were skeptical about the new measures.

“Everything will stay the same, prices will continue to rise,” 39-year-old Bruno Choy, who runs a street food stand, told AFP.

– ‘Plots’ –
The International Monetary Fund predicts inflation will hit a staggering one million percent this year in Venezuela — now in a fourth year of recession, hamstrung by shortages of basic goods, and crippled by paralyzed public services.

Maduro blames the country’s financial woes on opposition “plots” and American sanctions — but admits that the government will “learn as we go along” when it comes to the currency redenomination.

Electronic transactions are set to be suspended from Sunday to facilitate the introduction of the new notes.

Oil production accounts for 96 percent of Venezuela’s revenue — but that has slumped to a 30-year low of 1.4 million barrels a day, compared to its record high of 3.2 million 10 years ago.

The fiscal deficit is almost 20 percent of GDP while Venezuela struggles with an external debt of $150 billion.

Venezuela launched the petro in a bid for liquidity to try to circumvent US sanctions that have all but stamped out international financing.

But there’s a good reason the redenomination hasn’t generated renewed hope or investor confidence: Venezuela has done this before.

Maduro’s predecessor Hugo Chavez stripped three zeroes off the bolivar in 2008, but that failed to prevent hyperinflation.

Oliveros warned that the new bank notes will crumble “within a few months” if hyperinflation is not brought under control.

According to economist Jean Paul Leidenz, Venezuela is trying to emulate Brazil, which replaced its old cruzeiro currency with the real in the 1990s after the former was destroyed by hyperinflation.

But he said that will not work because of the government’s fiscal indiscipline and a lack of financing.

– Cryptocurrency ‘scam’? –
Cryptocurrency rating site ICOindex.com has branded the petro a “scam,” while the US has banned its nationals from trading in it.

“Anchoring the bolivar to the petro is anchoring it to nothing,” said economist Luis Vicente Leon, director at polling organization Datanalisis.

Right from the outset, it has not been clear how the petro would operate, nor what being backed by oil actually means.

Maduro’s government is desperately grasping at straws to try to fix the country’s economic meltdown.

Earlier this week, he announced a curb on heavily subsidized fuel in a bid to prevent oil being smuggled to other countries.

Subsidies would only be available to citizens registering their vehicles for a “fatherland card” — which the opposition has decried as a mechanism to exert social control over opponents.

Fuel subsidies have cost Venezuela $10 billion since 2012, according to oil analyst Luis Oliveros, but without them, most people would not be able to buy fuel.