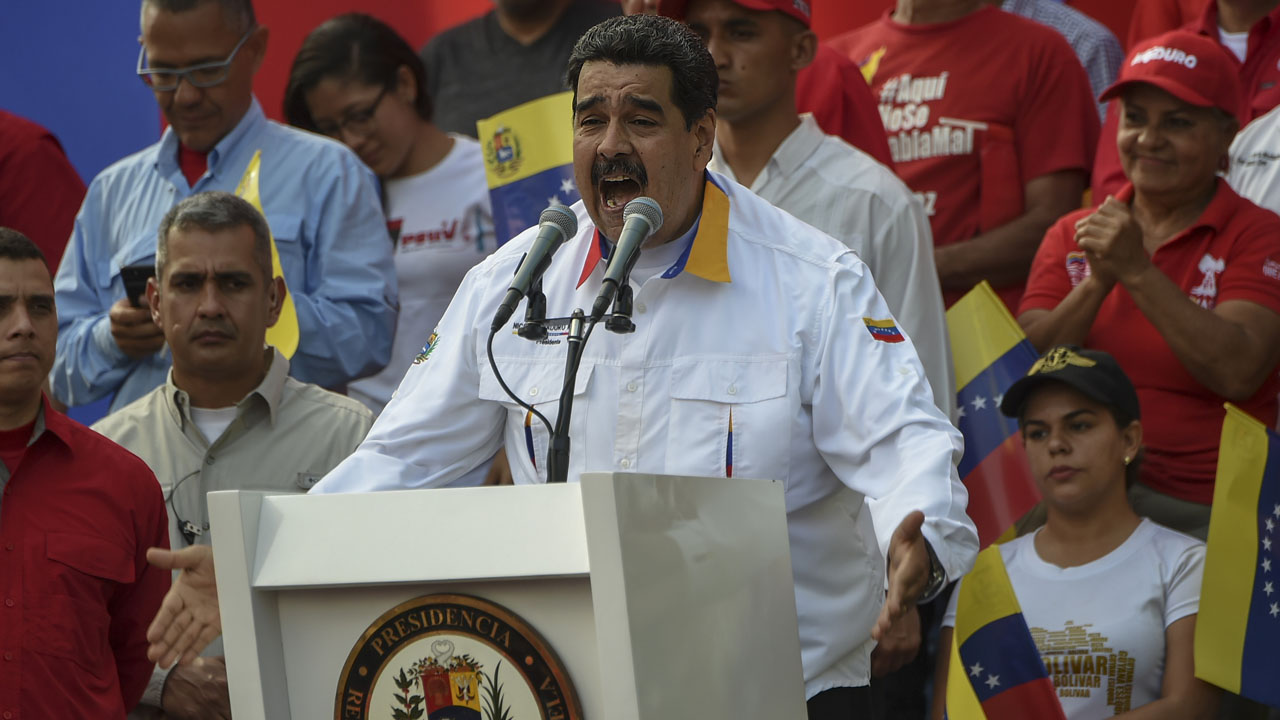 The announcement also prompted a withering response from Washington, where State Department spokesman Robert Palladino described the move in a brief remark as “ridiculous.”

It was the latest scuffle between Maduro and Guaido, who lay rival claims to be the legitimate leader of the oil-producing South American nation of 30 million people.

The competition has been escalated into a geopolitical struggle, drawing in the US and its allies which support Guaido, and Russia, Cuba and China backing Maduro.

Moscow stands by Maduro
Though unpopular in a country spiraling ever deeper into economic chaos, Maduro has the upper hand at home, thanks to loyalty from his military chiefs and, since last weekend, the presence of 100 Russian troops.

Abroad, Guaido is buoyed by US sanctions against Maduro’s regime funneling funds his way, and efforts to have his envoys recognized over Maduro’s in diplomatic missions and international organizations.

Maduro, who so far has heeded US warnings to not arrest Guaido under threat of unspecified repercussions, appears nonetheless more confident since Moscow’s overt protection.

Moscow on Thursday shrugged off a demand made a day earlier by US President Donald Trump that “Russia has to get out” of Venezuela.

Its troops, described as military experts, will stay “for as long as needed,” a spokeswoman for the Russian foreign ministry said, while the Kremlin suggested Washington back off and not interfere.

On Monday, Foreign Minister Sergei Lavrov accused the US of organizing a “coup” in Venezuela.

Some reports said the soldiers were there to operate air defense systems bought from Russia.

US tightens sanctions
The US has reacted angrily to Russia’s move, with Secretary of State Mike Pompeo expressing Washington’s displeasure in a tweet that borrowed a Maduro hashtag usually aimed at America.

“Maduro calls for hands off Venezuela while he invites security forces from Cuba and Russia, so he and his cronies can keep plundering Venezuela,” Pompeo posted.

“It is time for Venezuelan institutions to stand for their sovereignty. Russia and Cuba, #HandsOffVenezuela.”

The US tactics, so far, have been focused on ratcheting up sanctions. Those will jump to a critical level for Venezuela in a month’s time, on April 28, when America will impose a ban on imports of Venezuelan oil.

With the United States as Venezuela’s main customer for crude, that step is expected to severely impact Maduro’s already depleted state coffers.

The standoff has seen the US pull its diplomats from Venezuela, and American Airlines, which had already temporarily suspended flights to the country over security concerns, said Thursday that it was doing so indefinitely.

Hard-hit oil sector
Months of increasingly tough US sanctions, coupled with mismanagement by Maduro’s regime as it took over businesses and key sectors of the economy, and also corruption and many years of infrastructure underinvestment, have taken a toll.

Between Monday and late Wednesday, Venezuelans endured their second nationwide blackout this month. The previous one, unprecedented in scale and duration, lasted a week.

Analysts said the oil sector, which brings in 96 percent of state revenue, was all but paralyzed.

‘Desperate’ Venezuelans
For ordinary Venezuelans, the blackouts were a devastating blow on top of the hyperinflation and food insecurity that were pushing many to the brink of survival.

“This makes anyone desperate… Enough!” said Mauro Hernandez, a 57-year-old Caracas resident forced to walk 90 minutes to get to work.

Maduro’s government blamed the blackouts on US “cybernetic” attacks and “terrorist acts” by the opposition.

On Thursday, Communications Minister Jorge Rodriguez asserted that power had been restored to “most” of Venezuela and said that public offices — but not schools — will reopen on Friday after a multi-day closure.

But many continue to abandon the collapsing country, which has been abandoned by nearly three million Venezuelans since 2015, according to the UN.

And an internal UN report obtained by AFP on Thursday said that about 24 percent of the country’s population — seven million people — are in dire need of humanitarian aid.