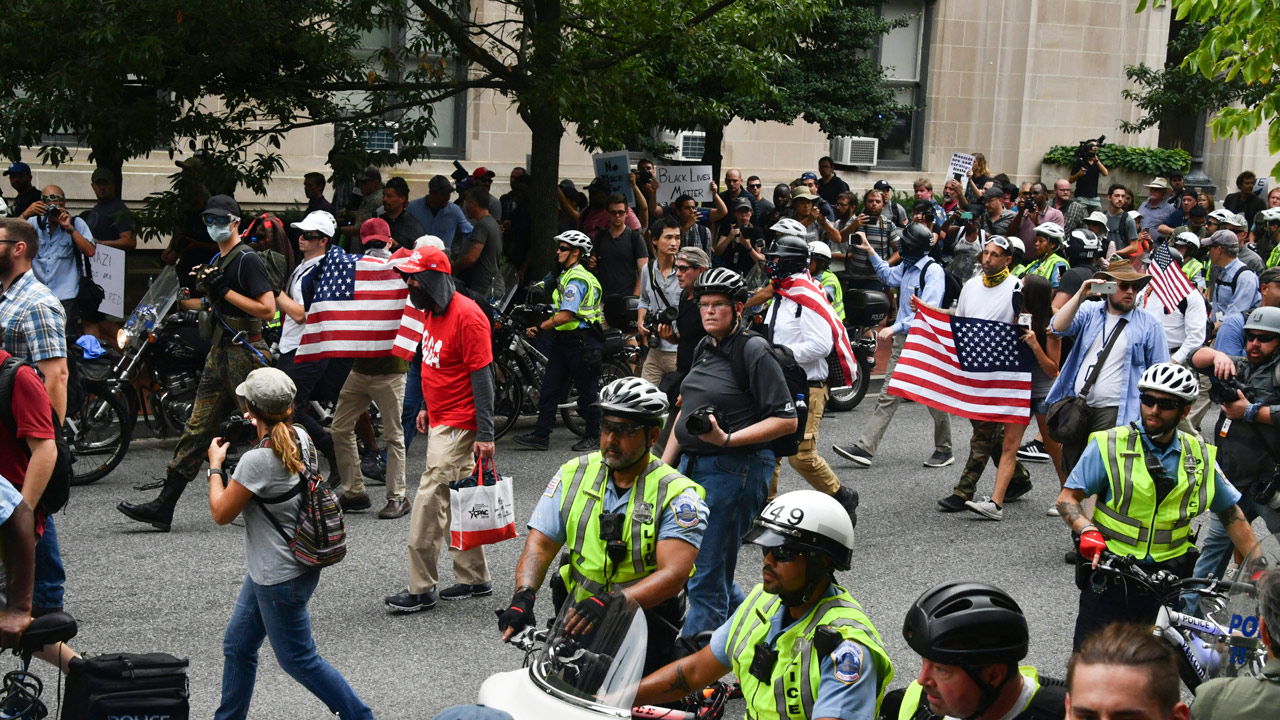 Washington police threw a ring of steel around the White House on Sunday, as a first small group of white supremacists arrived in the nation’s capital to rally a year after a deadly protest highlighted the growing boldness of America’s extreme right.

About 20 white nationalists trickled in from nearby Vienna, Virginia — under heavy police escort — at Washington’s Foggy Bottom Metro station, as a larger group of at least 300 counter-protesters awaited them, shouting “Shame!” and “Get out of my city!”

It was unclear how many more of the white supremacists, if any, might be arriving.

A huge phalanx of yellow-vested police officers escorted the white nationalists as they walked several blocks toward the rally site, separating them from angry, jeering counter-protesters.

Hundreds of counter-protesters converged around Lafayette Square across from the White House — where the rally was set to begin at 5:30 pm (1930 GMT) — and in Freedom Plaza a few blocks to the southeast.

Scores of police and law enforcement personnel swarmed the area, and streets for several blocks around were closed to traffic.

Hundreds of counter-protesters — some wearing the black outfits, helmets and face scarves associated with the so-called Antifa movement — had assembled on the northern edge of the park by mid-day, dancing and yelling.

Police stood by rows of metal barricades meant to separate the two groups.

The Unite The Right marchers were expected to arrive later on the opposite side — about 100 yards (meters) away.

At Freedom Plaza, located on one end of Pennsylvania Avenue that leads to the US Capitol a few hundred counter-protesters of all ages, including children and retirees, gathered in a seemingly light-hearted atmosphere.

“The US is for all of us, NOT just some of us,” one sign read, while another said, “Fighting Nazis: An American Tradition.”

Last year, torch-bearing white supremacists, ostensibly protesting the removal of Confederate statues, marched through Charlottesville, Virginia in two days of chaos that culminated with a man driving a car into a crowd of counter-protesters, killing a woman and injuring 19 people.

Charlottesville police faced massive criticism for their response and their failure to keep demonstrators and counter-protesters apart.

Washington police, who had begun massing near Lafayette Square as early as 8:00 am, appeared intent on avoiding the same pitfalls.

‘Like Nazi Germany’
Kei Pritsker, 22, a Washington-area volunteer for the Answer Coalition that organized this year’s counter-protest, was optimistic there would be no repeat of the violence, but said it was necessary to send a strong message to neo-Nazi sympathizers.

“It would be a major mistake if we allowed fascists to just walk into the nation’s capital and go in unopposed,” he said.

The white supremacist movement is enjoying a greater sense of empowerment under President Donald Trump, he added.

“When Trump was elected, a lot of those people that were harboring a lot of racist sentiments felt like, because they had a president’s backing, they could just go out and say this stuff,” Pritsker said.

In the immediate aftermath of last year’s march, Trump drew broad criticism when he appeared initially reluctant to condemn the extreme right-wingers — many of whom have rallied behind him since his election.

On Saturday, the president issued a generic condemnation of “all types of racism and acts of violence” via Twitter.

A black man at the counter-protest who would only give his name as Jim said America feels more racist under Trump.

“It has emboldened white folks now. If they are walking down the sidewalk, their position is you better get out of the way,” he told AFP.

“It was subtle, now it’s not subtle, it’s in your face. It’s like Nazi Germany.”

Rally organizers encouraged supporters to bring only US or Confederate flags — not neo-Nazi emblems — and cautioned them to avoid reacting angrily to counter-protesters.

All firearms were banned from the Washington protest site, including those legally carried by licensed gun owners, and police put signs up urging people against carrying weapons.

In a recent flareup, a black former White House employee, Omarosa Manigault Newman, wrote in an upcoming memoir that Trump uttered a racial slur “multiple times” while making his hit reality TV show “The Apprentice” prior to his presidential run, and that there are tapes to prove it. Trump called her a “lowlife.”