You are here
Home > HEADLINES > What has Guaido achieved as Venezuela’s US-backed ‘interim leader?’ 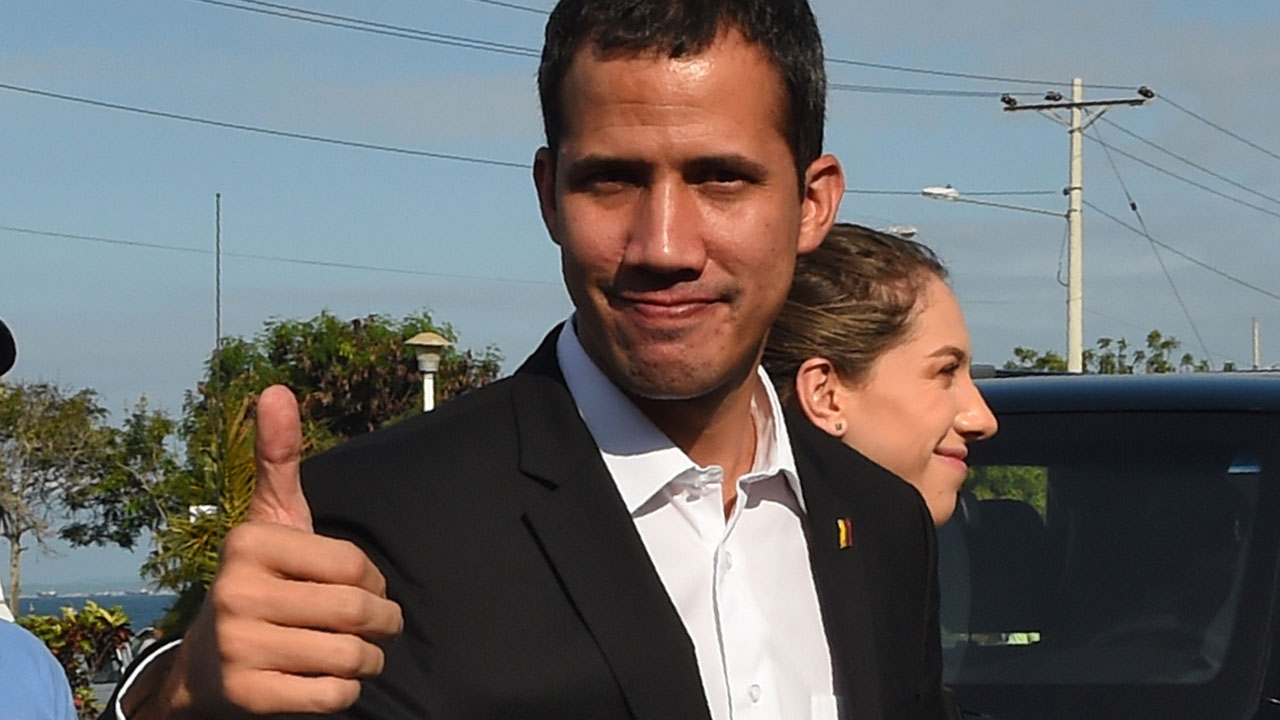 Venezuelan opposition leader and self-proclaimed acting president Juan Guaido (L) gives the thumb up as he arrives for a meeting with Ecuadorean President Lenin Moreno in Salinas, Ecuador on March 2, 2019. – The United States and Russia clashed Friday over how to assist crisis-wracked Venezuela, with Moscow pledging new relief channeled through President Nicolas Maduro and Washington slapping sanctions over the blocking of US aid it tried to push through the border. (Photo by Rodrigo BUENDIA / AFP)

Two months have now passed since Juan Guaido asserted himself as Venezuela’s interim president. Domestically, he has been unable to shake President Nicolas Maduro from power. But internationally, with US backing, he’s making some headway.

Guaido, the 35-year-old head of the opposition-run parliament, is riding on a wave of popular support as he tours the country on what he calls “Operation Freedom.”

But there is no sign yet of him making good on his vow to “very soon” march up to the presidential Miraflores Palace in Caracas and take over.

On Saturday, he was set to address a crowd in the northeastern city of Barcelona, after saying a day earlier that “we are calling for the phase of maximum public pressure” on the regime to go.

Maduro, 56, has repeated that he is going nowhere. He retains the loyalty of military chiefs and police with his hands on the levers of power: the state-run oil company PDVSA, the courts, his own parallel legislature and state media.

The president’s supporters held their own counter-demonstration Saturday in the capital.

On Thursday, his security forces arrested Guaido’s chief of staff, Roberto Marrero, on “terrorism” accusations, triggering an outcry from the European Union, the United States and other Latin American nations.

But Maduro has been careful to leave Guaido himself alone, heeding US warnings of “a significant response” were the opposition figurehead to be arrested.

– Public support for Guaido –
Both Guaido and Maduro claim to be constitutionally legitimate. Guaido declared himself interim president on January 23, saying Maduro’s re-election last year was invalid because opposition figures were barred from running and boycotted the ballot.

Inside Venezuela, Guaido has a 61 percent approval rating among the public, according to the polling firm Datanalisis. Maduro has only 14 percent.

But it’s abroad that Guaido’s backing is more consequential. More than 50 countries recognize him as interim president, including, crucially, the United States and major EU and Latin American nations.

Maduro, on the other hand, has China, Cuba, Iran and Russia on his side. The latter two are Venezuela’s biggest creditors, getting paid in the dwindling amounts of crude being exported.

The dueling support between the US and China spilled over Friday when the Inter-American Development Bank, which provides funding in Latin America, pulled its annual meeting out of China after Beijing refused to issue a visa to Guaido’s representative.

Washington is reportedly trying to have Guaido’s envoys replace Maduro’s officials on other international bodies, such as the UN Disarmament Conference in Geneva, where Venezuela is due to take over the rotating presidency.

US President Donald Trump’s government has also ratcheted up sanctions on Venezuela, most recently as Friday in reaction to Marrero’s arrest, and has frozen state accounts and assets on US territory.

On April 28, America is due to impose a ban on importing Venezuelan crude.

That will be a major blow, as the US is historically Venezuela’s biggest oil customer. But southern US oil refiners are also dependent on the heavy grade, high sulfur variety of oil that Venezuela produces.

Trump has reiterated that “all options” — including, it is inferred, military action — are on the table for Venezuela. However, US troops were not used last month in a foiled attempt by Guaido supporters to truck US aid in Colombia over the border into Venezuela.

The military, which controls politics and the economy, has shown “absolute loyalty,” ignoring calls by Washington and Guaido to abandon Maduro in return for amnesty, he noted.

While hundreds of soldiers have defected, the vast majority have been low-ranking troops.

The head of the Datanalisis firm, Luis Vicente Leon, said the core of the military has not broken ranks “because there has been no credible offer which the military elite could trust” and troops fear being trashed in any change of regime.

He added that the opposition likely expected that only a US invasion would eject Maduro and thus it would reject any possible negotiations in the hope of “provoking a fracture.”

Inflation is forecast by the IMF to top 10,000,000 percent this year. Once oil shipments to the US cease altogether, the country’s access to hard currency will be severely curtailed.

“The economic situation is going to worsen a lot more, and the population will experience a substantial deterioration of quality of life,” de Alba warned. He said increased repression by Maduro’s regime would follow.