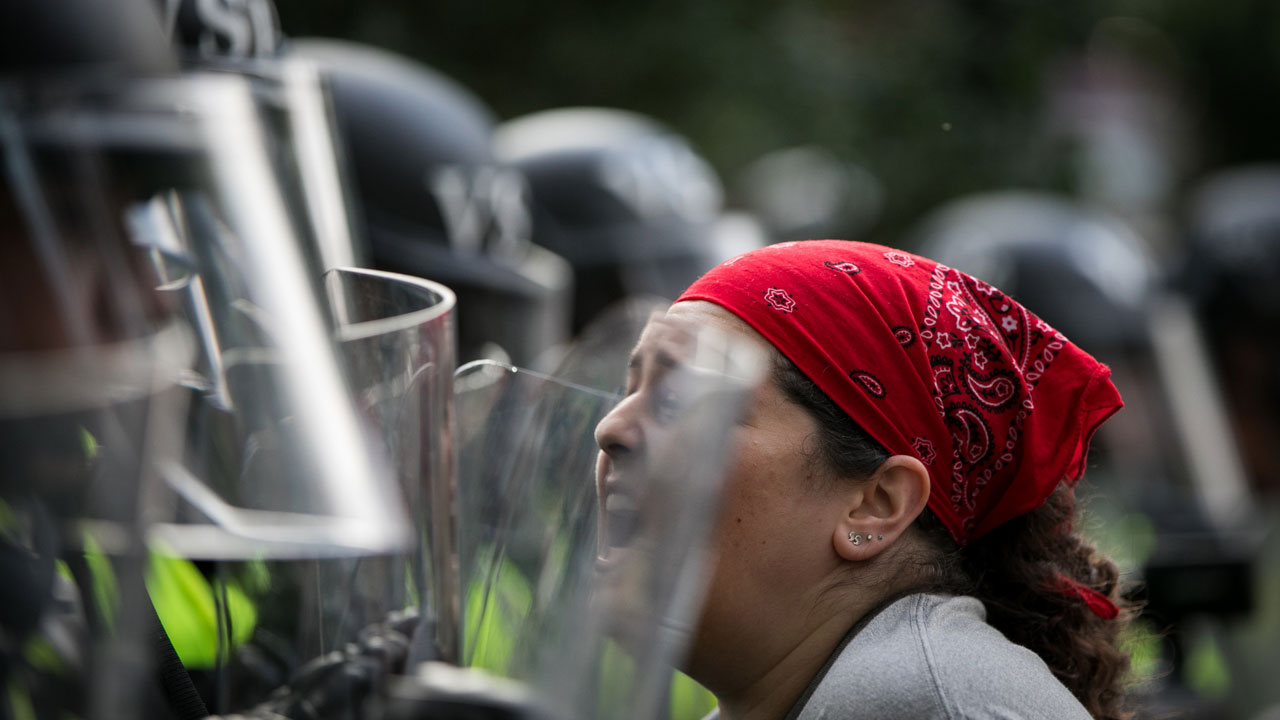 An activist confronts Virginia State Troopers in riot gear during a rally on the campus of The University of Virginia one-year after the violent white nationalist rally that left one person dead and dozens injured in Charlottesville, Virginia on August 11, 2018. US President Donald Trump, often accused of denigrating non-white people, condemned racism Saturday as the nation marked the anniversary of deadly unrest triggered by a neo-Nazi rally in Charlottesville, Virginia. That protest left one person dead and highlighted the growing boldness of the far right under Trump. Another far-right rally is scheduled for Sunday, right outside the White House.Logan Cyrus / AFP

White supremacists are set to rally outside the White House on Sunday, one year after torch-wielding neo-Nazis clashed with counter demonstrators in a deadly protest that highlighted the growing boldness of the extreme right in the United States.

Organized by Unite the Right the same network that called last year’s protest in Charlottesville, Virginia Sunday’s rally will once again see the extremists stand face-to-face with anti-fascists, who are staging a counter protest.

“I don’t know exactly what will happen, but it probably will not be good,” tweeted Richard Spencer, a leader of the so-called “alt-right” movement, who said he would be staying away from the rally.

All firearms will be banned from the Washington protest site, including those legally carried by licensed gun owners, officials said.

Rally organizers encouraged supporters to bring a US or Confederate flags, and cautioned not to react angrily to counter protesters.

“There will certainly be provocateurs trying to get a reaction out of you by trying to stick cameras in peoples’ faces, yelling, etc,” the Unite the Right website stated.

Members of the leftist Answer Coalition plan a “mass action” to protest the white nationalists.

When the demonstrations continued on August 12, fighting broke out between neo-Nazis and counterdemonstrators, including members of the anti-fascist Antifa group.

The violence culminated when a man plowed his car into a crowd of counter-protesters, killing a woman named Heather Heyer and injuring 19.

On Saturday, marchers in Charlottesville held peaceful demonstrations and people laid flowers on a makeshift memorial to Heyer.

Blame on ‘both sides’
President Donald Trump was roundly condemned last year for saying there was “blame on both sides” for the violence, condemning the anti-fascists who came “with clubs in their hands.”

Two days later, after a firestorm of criticism, the president said: “Racism is evil and those who cause violence in its name are criminals and thugs, including the KKK, neo-Nazis, white supremacists, and other hate groups.”

On Saturday the president issued a generic condemnation of racism via Twitter.

“The riots in Charlottesville a year ago resulted in senseless death and division,” he wrote. “We must come together as a nation. I condemn all types of racism and acts of violence. Peace to ALL Americans!”

Trump’s daughter Ivanka, a White House aide, was more explicit in her condemnation of the “ugly display of hatred, racism, bigotry & violence” last year at Charlottesville.

“There is no place for white supremacy, racism and neo-nazism in our great country,” she tweeted.

“Rather than tearing each other down with hatred, racism & violence, we can lift one another up, strengthen our communities and strive to help every American achieve his or her full potential!”