You are here
Home > 2019 elections > Why Osinbajo flew chartered helicopter, by presidency 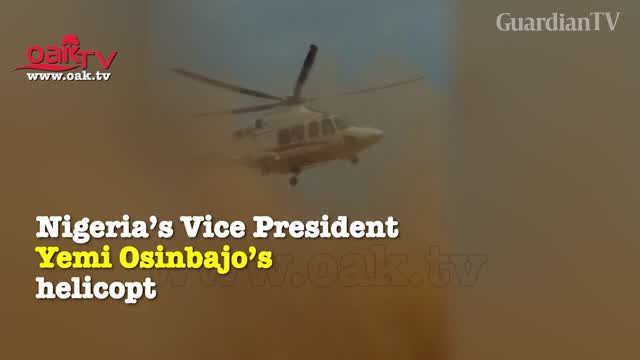 Presidency sources yesterday offered an insight into what led to the chartering of the ill-fated Caverton helicopter to fly Vice President Yemi Osinbajo and nine others at the weekend.

Inquiries by The Guardian confirmed that the presidential fleet had been depleted.

Consequently, it could not cater for the daily itinerary of the president and his deputy, especially during this period of electioneering.

Stakeholders though saw nothing wrong with the decision, they, however, queried due diligence, safety precautions and expertise of the crew.

This comes as the management of the airline attributed the near-mishap to bad weather.

A 15-seater Augusta AW139 medium-sized twin-engine facility was conveying the vice president and his team to Kabba, Kogi State when it crash-landed. While the aircraft was damaged, all occupants escaped unhurt.

Sources at the Ministry of State for Aviation said the presidential fleet has “no sufficient aircraft for multiple local travels.”

“The capacity has lately been reduced to about six, even some of these are not in use due to routine maintenance schedule. That may explain why the presidential fleet is borrowing aircraft,” a top official disclosed.

The presidency, had in 2016, resorted to penny-pinching measures, putting up two of the 10 planes in its fleet for sale.

The move, according to the Senior Special Assistant (Media and Publicity) to the President, Garba Shehu, was to check waste. The facilities were, as at 2014, costing the nation N1.52 billion to maintain and another N1billion for aviation fuel.

The presidential fleet was then the second largest owned by any nationwide, coming closely behind Arik Air that had 23 aircraft.

Aviation security consultant, Group Capt. John Ojikutu (rtd.), said there were valid reasons for the use of civil aircraft for presidential duties once due diligence, safety and security procedures had been observed.

He said the incident could not be treated with levity given that the nation’s number two citizen was involved.

Transport expert, David Ologe, submitted that the dimension of the site left much to be desired on the expertise of the crew.

But Caverton management, in a statement yesterday, attributed the unfortunate incident to bad weather, even as it had handed over the matter to the Accident Investigation Bureau (AIB) for a thorough investigation.

The Managing Director/Accountable Officer, Captain Josiah Choms, described the climate at the time of the crash as an “unusual weather condition.”

Its Director of Public Relations and Information, Ibikule Daramola, made the denial following a trending video on the social media linking the force with the asset.

“The NAF wishes to state categorically that the helicopter that crashed in Kabba does not belong to NAF or 011 PAF,” he clarified.

Meanwhile, the vice president, during a church service yesterday in Lokoja, thanked God for saving him and his entourage.

Osinbajo, who was speaking against the backdrop of surviving two of such incidents in eight months in the state, stated: “Only God can take the glory for saving my life and that of the nine crew members on board.”

The first was during a campaign tour and launch of TraderMoni in Kabba, Okene and Idah.

Besides, the Christian Association of Nigeria (CAN) has urged meticulousness from officials in charge of certification of aircraft.

In a statement in Abuja, the body’s president, Rev. (Dr.) Samson Ayokunle, recalled that he had a similar experience last year while visiting the Nigeria Customs College in the Federal Capital Territory (FCT).

Also yesterday, the presidential candidate of Accord Party, Reverend Isaac Babatunde Ositelu, called for the probe of the incident.

According to him, there was need to unravel the immediate and remote causes of the accident.