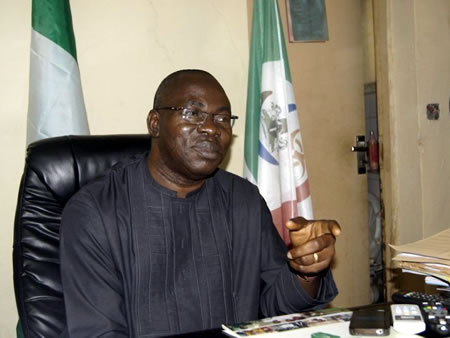 The Director General of National Biosafety Management Agency (NBMA), Dr Rufus Ebegba has said the scrapping of Biosafety Agency in Nigeria will result in dumping of unapproved and unwholesome Genetically Modified products in the Nigerian market.

He said that the country’s Biosafety Agency has been very effective and efficient in ensuring that only certified genetically modified materials or crops are allowed into the Nigerian market.

Dr Ebegba stated this while reacting to some comments on a popular radio station in Nigeria which suggested that the the National Biosafety Management Agency should be scrapped because it approved the environmental release of some genetically modified crops.

However, the NBMA DG said that all the permit issued by the Agency for the environmental release or importation of any genetically modified material, followed due and very stringent process which was never compromised at any level.

According to him “it has come to the knowledge of the Agency that a radio station in Abuja has been making very inciting comments against the National Biosafety Management Agency and its activities.

“This Press Briefing is to disabuse the fear being created in the public about the activities of the Agency by this radio station. These comments which are geared against Biosafety are seriously biased, lacking scientific evidence and facts.

Buhari, Jonathan, Atiku and I

“It is an attempt to flaw the Federal governments’ honest efforts to ensure the growth of the economy through the application of confirmed safe technologies, as well as that of the National Assembly who, for 13 years (2002- 2015) painstakingly evaluated the National Biosafety Management Bill before assenting it in 2015.

“The NBMA was established by the act of the National Assembly in 2015, with the primary aim to provide regulatory framework to adequately safe guard human health and the environment from potential adverse effects of modern biotechnology and genetically modified organisms, while harnessing the potentials of modern biotechnology and its derivatives, for the benefit of Nigerians”.

Furthermore, Dr Ebegba said “I want to emphasize that if modern Biotechnology and its products (GMOs) are not regulated, the nation will be in a food chaos as it will lead to dumping of unsafe GM products, and developers can produce unregulated GM products, flood the market with them and mislead Nigerians that they are not genetically modified.

“Hence, regulating this sector is very key for the development of the economy and for the sanctity of safety of GM products in the markets. Also, Nigeria will not benefit from safe modern biotechnology under a legal framework for economic growth, improved agriculture, job and wealth creation, industrial growth and sustainable environment as operators will not have confidence in the sector; but the nation will instead, be at the receiving end of the countries that have commercialized these crops since they will have free access to Nigeria market unhindered.

“Thus, with the establishment of NBMA, dumping of unauthorised GMOs into Nigeria is now at its barest minimum, and risks to human health from modern biotechnology practice and the use of GMOs are at their barest minimum.

“Accordingly, the Agency was not established to stop GMOs but to ensure that only GM products that are safe for humans and the environment are approved for release and use in Nigeria. NBMA therefore owes it as a duty to Nigerians to ensure that any product approved for importation or commercialization is safe. Also, note that the families of NBMA staff, NBC and NBTS members buy from the same market and would be putting their families’ lives at risk if they approve unsafe GM products.

Dr Ebegba further clarified that no approval has been given for the release or importation of GM mangoes, grape fruits and cassava, so it means that those products are not in the Nigerian market.

He said though approval has been given to some GM crops to be commercialized in Nigeria, but they would still undergo some other process of approvals before they could get to the hands of the farmers for planting.

“We wish to inform the public, that the GMO crops so far approved by the NBMA are not yet in the market, and even though approvals have been given for their commercial release, they still have to undergo other instant procedures such as through the Variety Release Committee and the National Seed Service.

“In Nigeria, NBMA has only granted Permit for commercial release of Bt Cotton insect resistant and Bt Cowpea modified for resistance to Maruca insect pest. Again, although approval has been given for commercial release of these crops, they are not yet in the market as they will have to go through other extant procedures of the Nation. Other approvals given are, for the importation of GM soybeans and GM Maize for food and feed processing”.

“I wish to re-emphasize, that the absence of a Biosafety system will amount to dumping of unauthorized GM into the country with its attendant adverse effect to human, animal, environment and the economy. Hence, those calling for scrapping of the NBMA are directly paving way for dumping of GMOs in the country, enriching the countries from which these crops are imported, weakening the potentials of our scientists in this sector and do not have the interest of the public at heart, as they claim.

“The process for granting permits is very rigorous and hectic. Independent committees are set for this purpose and these committees go through the application carefully before a recommendation is made to the Agency. These two committees (the National Biosafety Committee NBC and the National Biosafety technical sub-committee, NBTS) made up of professionals and experts from the academia, line government agencies, civil society groups and other stakeholders are constituted to painstakingly analyse the applications, review the risk management and risk assessment plans before a decision is made. These decisions are never rushed at any point in time.

“The Permits so far given were granted after proper risk assessment and analysis were carried out, public display of the application done and the applications duly reviewed by representatives from all sectors of the economy. The NBMA has endorsed them safe for human health and the environment and these were done with the interest of Nigerians at heart.

“The Agency will continue to ensure that only safe GMOs will be allowed either for planting, consumption or processing in Nigeria as the Agency has full structural and human capacity to ensure the safety of Nigerians in the use of genetically modified organisms and application of Modern Biotechnology.

“The Agency is well aware that there are miscreants who are not playing honestly and we are taking proactive steps to ensure that Nigerian are not misled.

The Agency has never taken any decision in isolation but has always carried the public along and as such, I want to assure Nigerians that the information from that media house is not genuine, scientific and it is based on flawed scientific process that have been pulled down from peer review journals in which they were published. Scientific facts are replicable under laid down scientific procedures”, Dr Ebegba added.