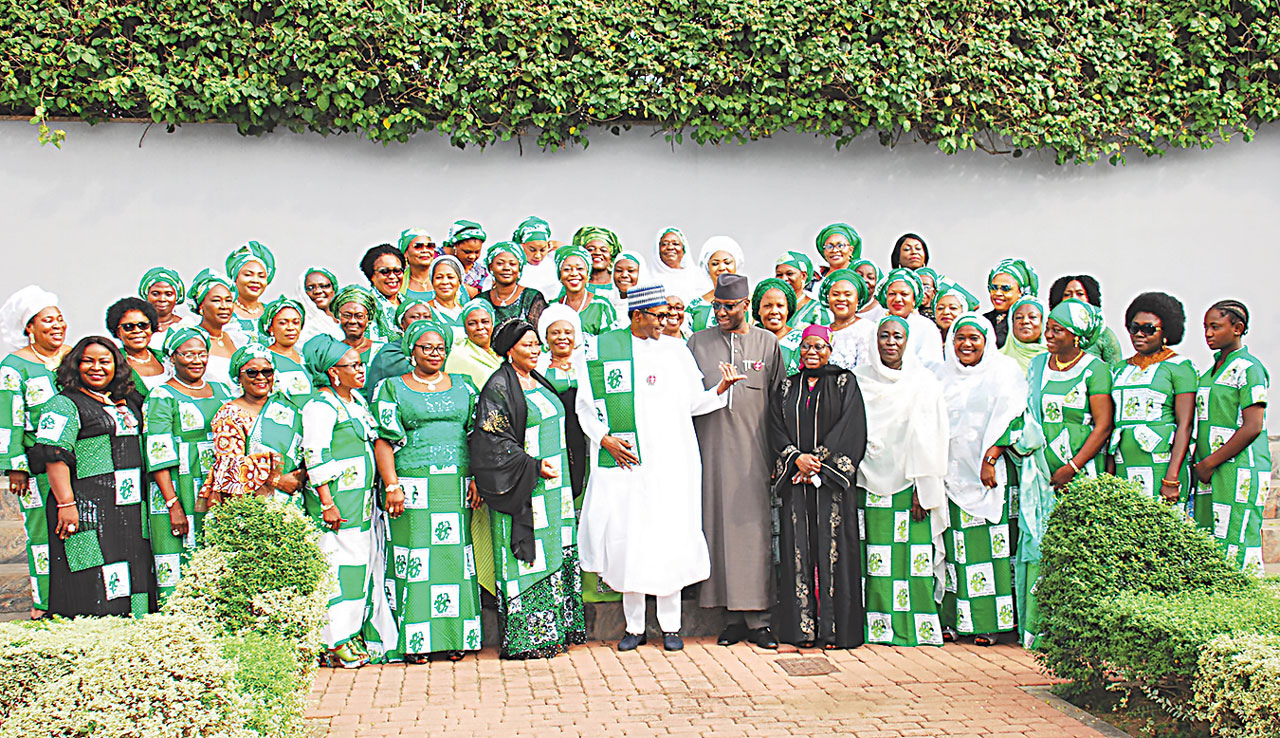 President Muhammadu Buhari (middle); Secretary to the Government of the Federation (SGF); Boss Mustapha with members of the National Council of Women Societies (NCWS); led by its President, Mrs. Gloria Laraba Shoda, during their visit to the presidential villa in Abuja… yesterday. PHOTO: PHILIP OJISUA

‘Only 24 states have female representatives in N’Assembly’
Women under the auspices of the National Council of Women Societies (NCWS) have hinged their support for President Mohammadu Buhari’s re-election in 2019 on his appointment of more women into cabinet positions.

Specifically, the women requested President Buhari to fill three vacant ministerial positions in his cabinet with women before the end of the year.

President of NCWS, Gloria Shoda, who led members of the organisation to a meeting with President Buhari at the presidential villa, Abuja yesterday, said there was deficit of women representation in the present administration.

“Nigeria is yet to fulfill the target of 35 per cent of women in decision-making positions in the executive. The three women who vacated their ministerial posts for various reasons have not been replaced.

“You know we are the foot soldiers and as women, we come out to vote. If you do this for us, we will gladly come out en-mass to vote for you.

“We appeal to you to champion the inclusion and participation of more women in your cabinet, public office and board appointments. We also hope that the three ministerial positions will be filled before the end of this year,” she said.

The NCWS leader informed the President that Nigerian women were not happy over how the major political parties treated women during the last primary elections in the country.

Meanwhile, the Nigerian Women Trust Fund (NWTF) has lamented that only 24 of the 36 states have women representatives in the National Assembly.

Chief Executive Officer of NWTF, Mrs. Mufuliat Fijabi, disclosed this, while discussing with stakeholders on institutionalising anti-corruption and accountability in Ibadan, Oyo State.

Governorship candidate of National Interest Party (NIP), Mrs. Bolanle Sarumi Aliyu and representatives of various political parties in the state, among others, attended the event.

Fijabi said the group was surprised to find that 12 of the 36 states of the federation did not elect women as lawmakers during the 2015 general elections.

“The implementation of gender equality commitments at the national, regional and international levels is necessary to achieve the advancement of human rights, gender equity and women empowerment,” she added.