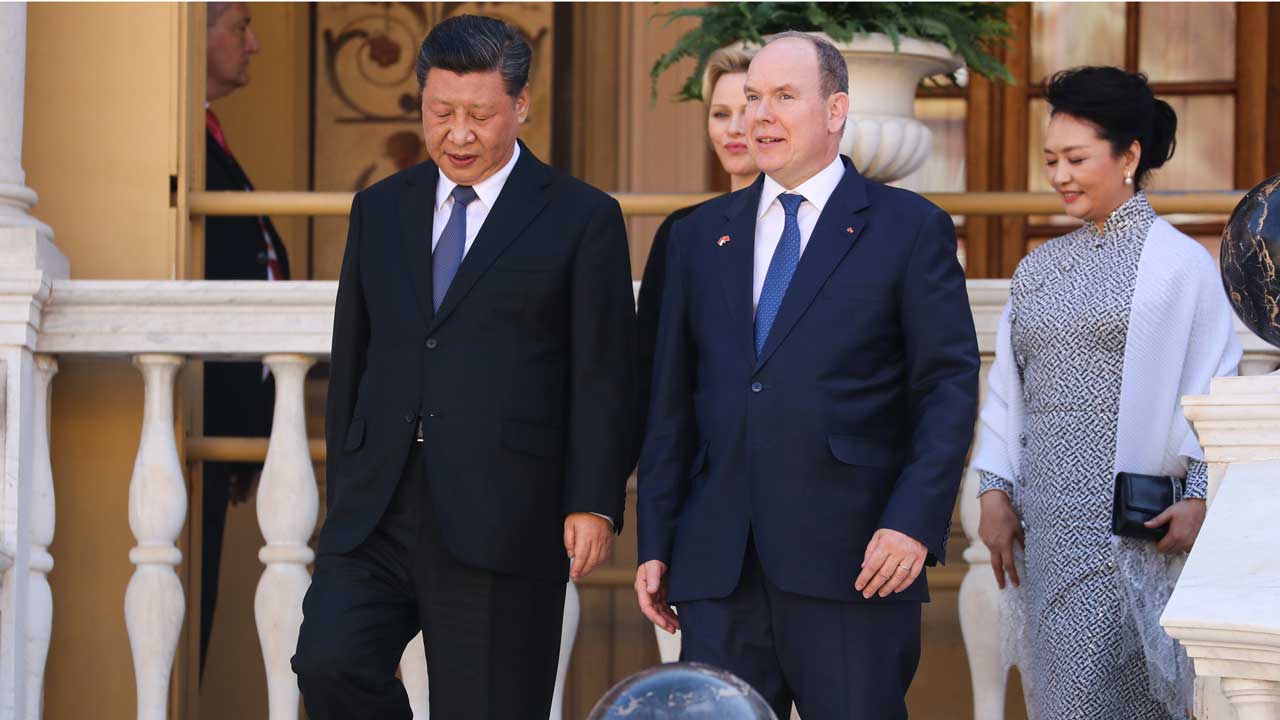 (LtoR) Chinese President Xi Jinping, Princess Charlene of Monaco, Prince Albert II of Monaco and the wife of China’s President Peng Liyuan leave after their meeting at the Monaco Palace on March 24, 2019. Chinese President heads to the French Riviera for the final leg of his European tour, as French President looks to forge a united European front to contend with China’s global ambitions. Valery HACHE / AFP

Chinese President Xi Jinping visited Monaco on the French Riviera Sunday seeking to press ambitious commercial goals ahead of talks with France’s Emmanuel Macron who is trying to forge a united European front to contend with Beijing’s advances.

Xi arrived at the airport of the iconic resort city of Nice accompanied by his wife Peng Liyuan to be welcomed by French Foreign Minister Jean-Yves Le Drian and an honour guard.

Prior meeting with Macron Xi went to the nearby principality of Monaco, where he was received by Prince Albert II and Princess Charlene.

Xi, who has made establishing China as a global player central to his government, travelled from Italy, whose government became the first G7 state to sign up to his landmark new “Silk Road” infrastructure project, a massive undertaking to join Asia to Europe.

The project has raised eyebrows in Washington and in some EU capitals where critics say it will give China too much sway. Xi says it would be a two-way street of investment and trade.

“In a world with giants like China, Russia or our partners in the United States, we can only survive if we are united as the EU. And if some countries believe that they can do clever business with the Chinese, then they will be surprised when they wake up and find themselves dependant,” Maas told Welt am Sonntag newspaper.

“China is not a liberal democracy,” he added.

Amid tight security, Xi and his wife were Sunday evening to join Macron and his wife for a private dinner at nearby Beaulieu-sur-Mer overlooking the Mediterranean during which they would have what a Chinese official termed “a deep exchange of views on Sino-French, Sino-European relations and international and issues of mutual interest.”

A series of cooperation deals on nuclear power, aerospace and clean energy initiatives, some involving lucrative contracts, are expected to be signed.

On Tuesday, Macron and Xi will be joined by German Chancellor Angela Merkel and EU Commission chief Jean-Claude Juncker to explore “points of convergence” ahead of an EU-China summit in Brussels next month.

China as EU ‘rival’
But Xi’s visit poses a particular challenge for Macron, who wants to deepen EU ties with China while also pushing back against Beijing’s growing global clout.

Europe’s distrust of Chinese telecom giant Huawei, which is poised to become the dominant player in next-generation 5G mobile technology worldwide, is emblematic of the increasingly rocky relationship.

Monaco, which notably is eyeing a share of Chinese luxury tourism and has its own foreign policy, only last year signed an accord with Huawei to make the principality the first country entirely covered by the company’s 5G mobile network by year end.

Macron has lauded the EU’s “awakening” to the challenges posed by China, which the bloc now labels a “rival” despite being Europe’s biggest trading partner.

“The reality is that the world has changed significantly — China is not the country it once was, and we are dealing with a very major partner,” a Macron aide said ahead of Xi’s visit.

The US is pressuring European allies to not use the Huawei technology, saying it creates a security risk by potentially letting Beijing snoop on sensitive communications.

But France has not ruled out using Huawei gear.

‘Reality very different’
Despite the many sources of friction, France wants to engage China as a closer partner as Washington makes a pointed withdrawal from global affairs under Trump’s “America First” policy.

China has been investing heavily in a diplomatic offensive across Africa, promising to help build infrastructure projects as part of the new Silk Road initiative.

Aides say Macron will press Xi to ensure such projects are fair and explore the participation of French companies amid allegations the deals could load African countries with unsustainable debt.

“If we’re going to talk about a new Silk Road, then it must be one that goes in both directions,” French Finance Minister Jean-Yves Le Drian told BFM television on Friday.

Macron is also expected to urge Xi to commit to the ambitious global bid to cut carbon emissions, even if China is still building dozens of coal-burning power plants.

“China talks about defending multilateralism and humanity’s common future to anyone wanting to listen, but the reality is very different,” said Emmanuel Dubois de Prisque, a China expert with the Thomas More Institute in Paris.