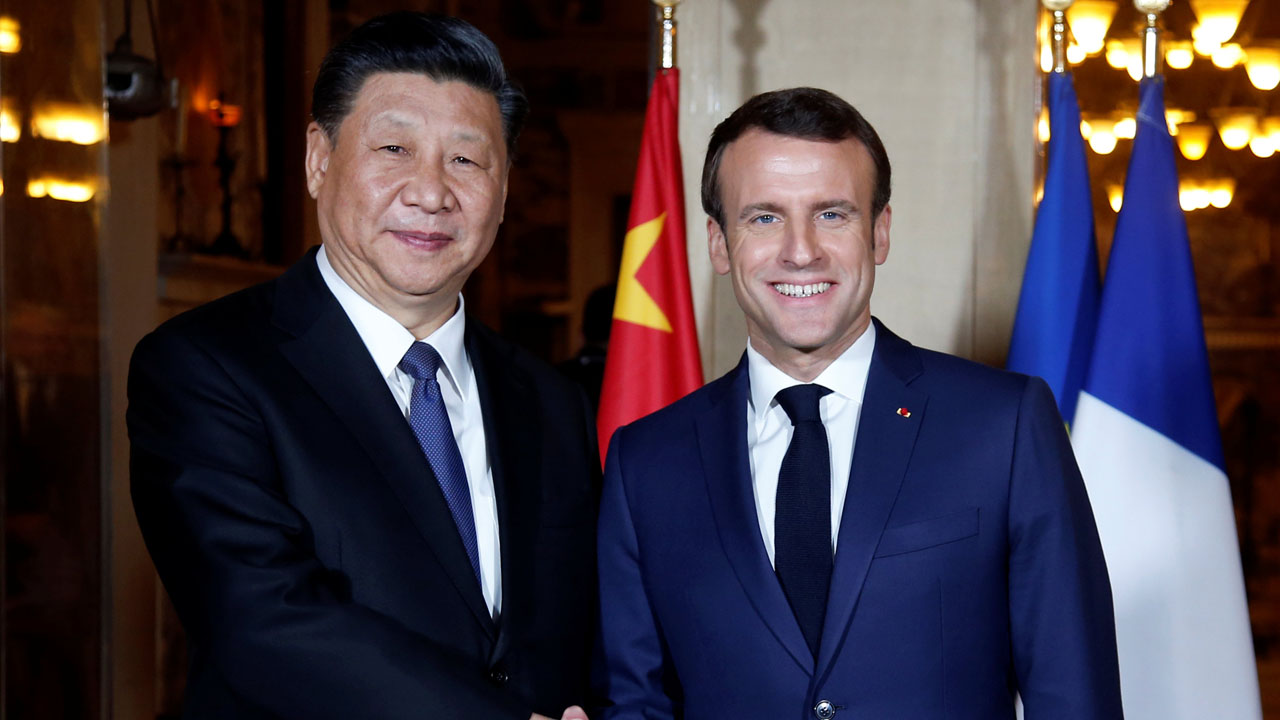 French President Emmanuel Macron (R) shakes hand with China’s President Xi Jinping (L) at the Villa Kerylos before a dinner on March 24, 2019 in Beaulieu-sur-Mer, near Nice on the French riviera. (Photo by JEAN-PAUL PELISSIER / POOL / AFP)

Chinese President Xi Jinping and his French counterpart Emmanuel Macron were to hold talks in Paris on Monday with the host leader seeking to forge a united European front in the face of Beijing’s inroads on the continent.

A series of cooperation deals on nuclear power, aerospace and clean energy initiatives, some involving lucrative contracts, are expected to be signed.

On Tuesday, Macron and Xi will be joined by German Chancellor Angela Merkel and EU Commission chief Jean-Claude Juncker to explore “points of convergence” ahead of an EU-China summit in Brussels next month.

In an interview with the Nice-Matin newspaper after hosting Xi at a dinner on the French Riveria, Macron said the joint talks “would allow us to establish a common definition for a new international order.”

Security was tight as Macron and his wife Brigitte hosted Xi and his singer wife Peng Liyuan for a private dinner at the resort village of Beaulieu-sur-Mer near Nice.

Macron offered Xi a French translation of Confucius dating from the 17th century, while Xi gave his host a precious vase depicting images of the two countries including a panda and a rooster.

Before the dinner Xi travelled to the nearby principality of Monaco, where he was received by Prince Albert II.

Xi had arrived from Italy, whose government became the first G7 state to sign up to his landmark new “Silk Road” infrastructure project, a massive undertaking to join Asia to Europe.

Italy’s move came despite misgivings over the huge venture by other European nations wary of China’s growing influence. Xi insisted it will be a two-way street of investment and trade.

EU Budget Commissioner Gunther Oettinger in a newspaper interview Sunday expressed “concern that in Italy and other European countries, infrastructure of strategic importance like power networks, rapid rail lines or harbours are no longer in European but in Chinese hands.”

“In a world with giants like China, Russia or our partners in the United States, we can only survive if we are united as the EU,” he said.

“And if some countries believe that they can do clever business with the Chinese, then they will be surprised when they wake up and find themselves dependent.”

Walking a tightrope
Macron will treat Xi to a military honour guard at the Arc de Triomphe war monument in Paris on Monday, before further talks at the Elysee Palace and a state dinner.

Xi’s visit poses a particular challenge for Macron, who wants to deepen EU ties with China while also pushing back against Beijing’s growing global clout.

Europe’s distrust of Chinese telecom giant Huawei, which is poised to become the dominant player in next-generation 5G mobile technology worldwide, is emblematic of the increasingly rocky relationship.

Monaco, which is notably eyeing a share of Chinese luxury tourism and has its own foreign policy, last year signed an accord with Huawei to make the principality the first country entirely covered by the company’s 5G mobile network by year end.

The US however is pressuring European allies not to use the Huawei technology, saying it creates a security risk by potentially letting Beijing snoop on sensitive communications.

France has not ruled out using Huawei technology.

As well as addressing commercial cooperation and strategic issues with Xi, Macron has also been urged to deal with the case of Meng Hongwei, Chinese former head of the France-based agency Interpol.

Meng’s wife has had no news of her husband since his arrest in China nearly six months ago. It emerged Sunday she has written to Macron asking him to bring up his disappearance with Xi.

Meng is believed to be facing corruption charges.

Despite the many sources of friction, France wants to engage China as a closer partner as Washington makes a pointed withdrawal from global affairs under Trump’s “America First” policy.