You are here
Home > asia > Xi warns no one can ‘dictate’ China’s path, 40 years on from reforms 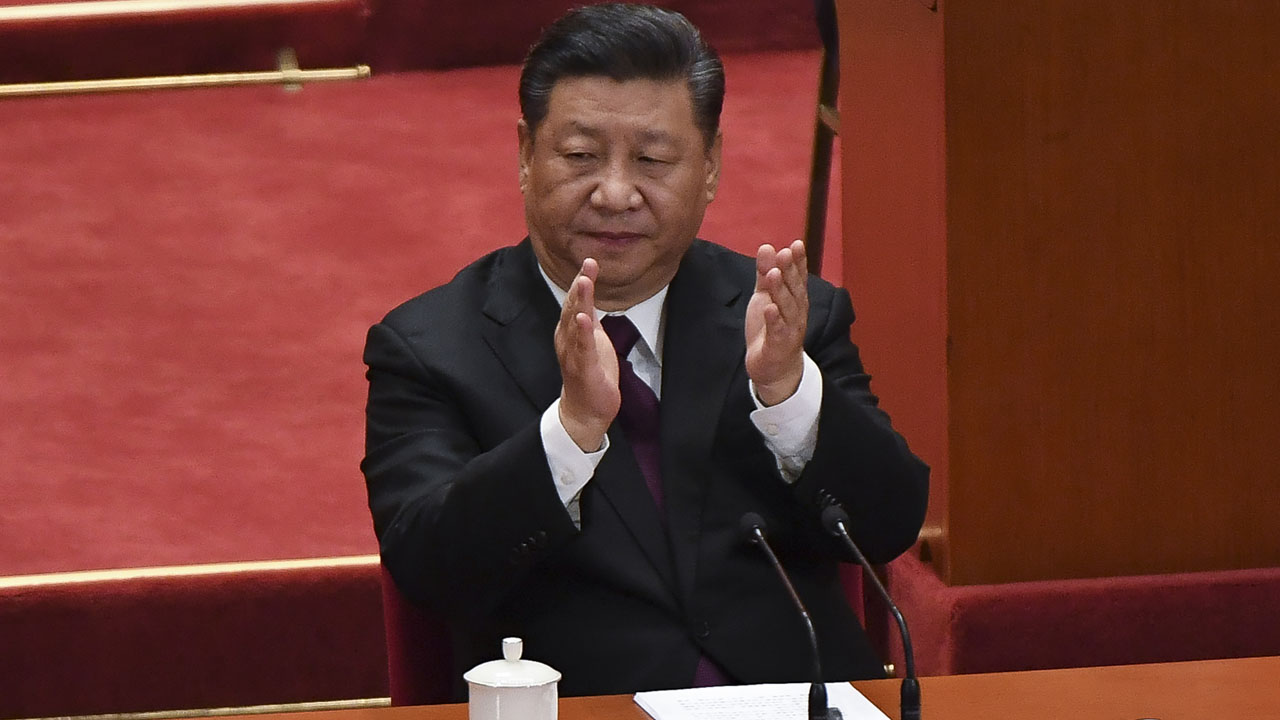 China’s President Xi Jinping applauds during a celebration meeting marking the 40th anniversary of China’s “reform and opening up” policy at the Great Hall of the People in Beijing on December 18, 2018. – President Xi Jinping warned on December 18 that no one can “dictate” China’s economic development path as the Communist Party marked 40 years of its historic “reform and opening up” policy amid a stern challenge from the United States. (Photo by WANG Zhao / AFP)

President Xi Jinping warned Tuesday that no one can “dictate” China’s economic development path as the Communist Party marked 40 years of its historic “reform and opening up” policy amid a stern challenge from the United States.

In a speech at the grandiose Great Hall of the People, Xi vowed to press ahead with economic reforms but made clear that Beijing will not deviate from its one-party system or take orders from any other country.

Without directly referring to the United States, Xi said China “poses no threat” to any country but warned that it would not be pushed around.

“No one is in a position to dictate to the Chinese people what should or should not be done,” China’s most powerful leader since Mao Zedong told the party faithful.

While Xi promised more reforms, he did not offer any specifics. The US and Europe have long complained of lingering obstacles to fully entering China’s massive market while Chinese companies enjoy the benefits of open Western economies abroad.

“China is increasingly approaching the centre of the world stage and becoming a recognised builder of world peace, a contributor to global development, and a defender of the international order.”

The commemoration of the reforms enacted under late paramount leader Deng Xiaoping on December 18, 1978, came as China is locked in diplomatic spats and a bruising trade war with the United States.

The rivals have agreed to a 90-day truce as they seek to negotiate a solution, with the US seeking a reduction in its massive trade deficit as well as deeper reforms in China to stop the alleged theft of intellectual property.

China’s reforms pulled hundreds of millions of people out of poverty and turned the country into the world’s second biggest economy.

But it is currently facing a debt mountain and a slowing economy, which grew by 6.9 percent last year and the rate is expected by the government to ease to around 6.5 percent this year.

– ‘Emancipating the mind’ –
Tuesday’s ceremony included the awarding of medals to more than 100 individuals whom the party recognised as key contributors to the country’s development, from people involved in rural reform and poverty alleviation to China’s richest man, Alibaba founder Jack Ma, and retired NBA legend Yao Ming.

Deng’s reforms broke with Maoist-style collectivisation that left the nation impoverished and backward.

The poverty rate among the rural population dropped to 3.1 percent last year from 97.5 percent 40 years ago.

China now boasts the most dollar billionaires in the world with 620, according to Shanghai-based magazine publisher Hurun Report.

But the economic transformation has not brought changes to the Communist Party-controlled political system, with authorities harshly cracking down on the Tiananmen protests in 1989 and activists complaining of a deterioration of human rights in recent years.

“Now they’re just constraining the mind of the people and party members… it’s like China is moving in another direction from reform.”

Xi’s speech paid lip service to the idea of reform but without any concrete plans, it hints at divisions within the leadership on how to deal with the trade war and other political situations, Cabestan added.

– Second reform? –
The trade war could be a chance for China to enact more changes, said Beijing-based political analyst Wu Qiang, who described the current system as “state capitalism under a one-party dictatorship, or party-run capitalism”.

“If the Communist Party is smart enough, it may transform it into the starting point of a second reform and opening up and change the role of the party and the state,” Wu said.

When the party enacted the reforms under Deng, China was still suffering from famine and was emerging from the Cultural Revolution, a period of intense social and political upheaval launched by Mao.

This new “revolution” started in the countryside, where authorities began to de-collectivise land and dismantle communes, but it quickly spread to cities.

Wary of an opposing power base in economically powerful Shanghai, Deng chose the extreme south of the country as the guinea pig for his reforms.

Southern cities including Shenzhen, which borders Hong Kong and was still a fishing village, were designated China’s first Special Economic Zones that became powerhouses and models for the rest of the country.