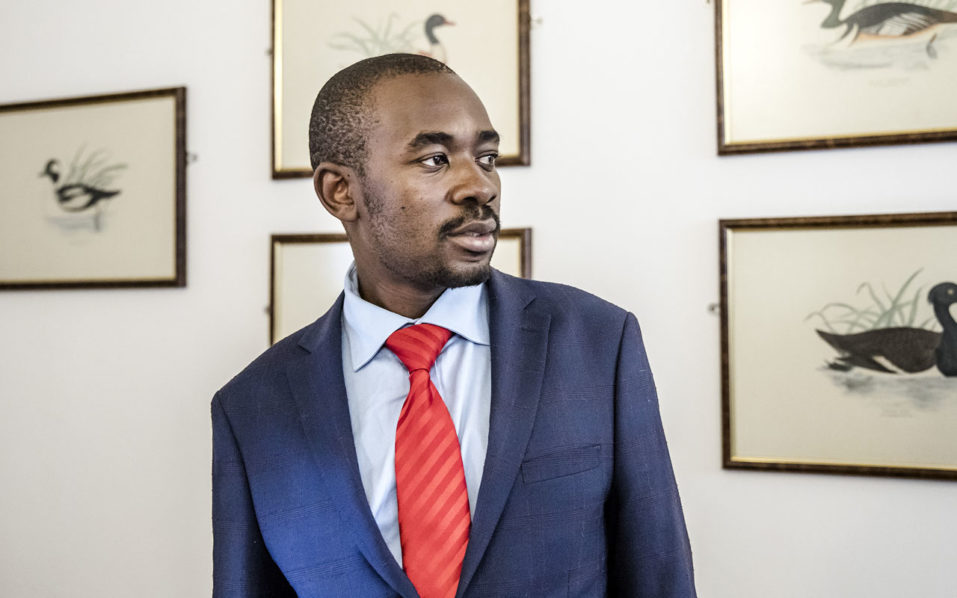 Zimbabwe’s MDC opposition leader Nelson Chamisa waits at The Bronte Hotel in Harare on August 3, 2018, to address media representatives at a press conference. Zimbabwean riot police entered a Harare hotel to break up a planned press conference by opposition leader Nelson Chamisa, who has rejected election results announced in the early hours of the morning. The police, carrying shields and teargas cannisters, prevented the event from starting at the Bronte Hotel in the capital, AFP reporters witnessed./ AFP PHOTO / Luis TATO

The country’s first election since Robert Mugabe’s ousting has been marred by rigging allegations, the army opening fire on opposition demonstrators killing six people, and accusations of a security crackdown on opposition supporters.

The MDC has until Friday to lodge its suit after Mnangagwa — formerly a close ally of Mugabe — won 50.8 percent in last week’s vote, just scraping in above the 50 percent run-off threshold.

“Those results represent a total negation of the will of the people,” MDC lawyer Thabani Mpofu told reporters in Harare. “The election results made by ZEC (Zimbabwe Electoral Commission) will be challenged.”

Under Zimbabwean law, the deadline for filing the challenge is Friday. The Constitutional Court must rule on the petition within 14 days, delaying Mnangagwa’s planned inauguration.

“ZEC’s figures in our view grossly mathematically fail to tally,” said Mpofu. “We are convinced once this has been placed before a court, there will only be one outcome.”

He gave no details about any evidence of alleged fraud, promising instead to reveal “a secret weapon” in court.

Alexander Noyes, an analyst at the US Center for Strategic and International Studies, said the legal case had little chance of success due to the courts’ “long-held bias” towards the ruling ZANU-PF party.

Noyes added the MDC would likely cite a EU observer report that concluded the election was held on an “un-level playing field.”

Mnangagwa has vowed to protect rights in the “new Zimbabwe” after Mugabe’s 37-year repressive rule but the MDC and civil action groups allege that authorities have unleashed a brutal post-election crackdown on opponents.

– Arrests and beatings –
Senior MDC figure Tendai Biti was arrested as he tried to flee to neighbouring Zambia to seek asylum early Wednesday, his lawyer said, allegedly on charges of inciting violence over the disputed vote count.

Biti last week claimed victory for the Movement of Democratic Change (MDC) party, triggering celebrations the day before soldiers opened fire on MDC protestors and before the final presidential results were announced.

“He was arrested at the Zambian border,” Biti’s lawyer Nqobizitha Mlilo told AFP, adding by text message that he was trying to seek asylum.

The state-run Chronicle newspaper said Tuesday that Biti was among nine suspects sought for inciting the MDC protests at which the army opened fire.

Biti is a senior figure in the MDC alliance and was a respected finance minister in Zimbabwe’s troubled 2009-13 power-sharing government.

The European Union and United States have condemned violent attacks targeting the opposition.

The MDC headquarters were raided last week by authorities in what Mpofu described as “an attempt to destroy our evidence”, but he said their data was secure.

The election was meant to relaunch Zimbabwe on the international stage and attract foreign aid and investment.

UN Secretary-General Antonio Guterres told Mnangagwa during a telephone conversation that he must rein in his security forces, a UN spokesman said.

Guterres also spoke by phone with Chamisa to urge him not take his party onto the streets.

Mnangagwa, the ZANU-PF party and the electoral commission have all dismissed charges of cheating.

The president faces massive challenges in his promise to revive an economy that Mugabe left in disastrous shape after presiding over the seizure of white-owned farms, agricultural collapse, a hyperinflationary surge and an investment exodus.

Previously solid health and education services are in ruins, while millions of Zimbabweans have fled abroad to seek work.