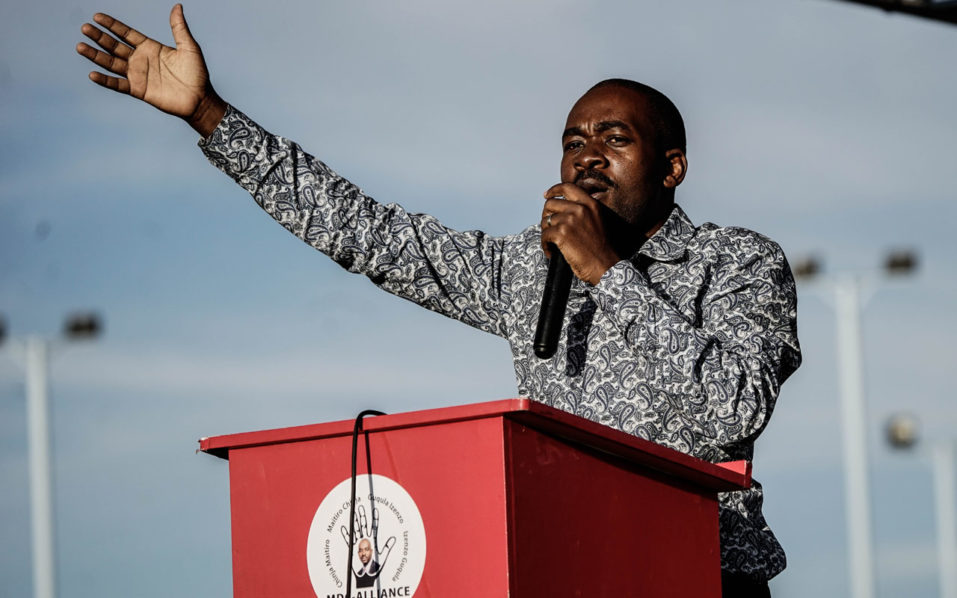 (FILES) In this file photo taken on July 21, 2018 Zimbabwe main opposition party Movement for Democratic Change Alliance leader Nelson Chamisa gestures as he addresses a crowd of supporters during an election campaign rally at White City stadium in Bulawayo, Zimbabwe.Zimbabwe’s Constitutional Court on August 22, 2018 began to hear an opposition petition seeking to overturn the presidential election result, in a legal challenge seen as unlikely to succeed despite allegations of vote fraud. The Movement for Democratic Change (MDC) has accused the ruling ZANU-PF party and the election commission of rigging the July 30 vote, Zimbabwe’s first poll since the ousting of Robert Mugabe last year./ AFP PHOTO / ZINYANGE AUNTONY

Zimbabwe’s Constitutional Court will Wednesday hear an opposition petition seeking to overturn the presidential election result, in a legal challenge seen as unlikely to succeed despite allegations of vote fraud.

The Movement for Democratic Change (MDC) has accused the ruling ZANU-PF party and the election commission of rigging the July 30 vote, Zimbabwe’s first poll since the ousting of Robert Mugabe last year.

Mugabe’s successor, Emmerson Mnangagwa, won with 50.8 percent of the vote — just enough to avoid a run-off against the MDC’s Nelson Chamisa, who scored 44.3 percent.

“We have a very strong case and we are going to reverse the electoral fraud,” Chamisa told reporters this week.

“We are going to defend your vote, our vote, the people’s vote. We have no doubt that victory is certain.”

Mnangagwa, who has vowed to turn around Zimbabwe’s ruined economy, hoped the elections would draw a line under Mugabe’s repressive 37-year rule.

The election campaign was more open than previous votes, but was marred by the army opening fire on protesters, killing six, allegations of vote-rigging and a crackdown on opposition activists.

“I won the court case before it began,” Mnangagwa said on the sidelines of a regional summit in Namibia at the weekend. “It’s declared free and fair… why would I ever think that I will lose?”

“To those who voted for Chamisa, I ask you to gracefully accept defeat so that the country can move on.”

The MDC has cited a catalogue of irregularities and discrepancies including more people voting at some polling stations than were registered.

The case, presided over by nine judges at the country’s top court, will be broadcast live on state television. A ruling is expected by Friday.

Derek Matyszak, a legal expert at the University of Zimbabwe, said the opposition faced an uphill struggle given the courts’ historic tilt towards ZANU-PF, which has ruled since independence from British colonial rule in 1980.

“The outcome is pretty predictable,” Matyszak told AFP. “There is absolutely no chance of the election results being overturned.

“The judiciary (is) perceived to be partisan. Once the ruling is made, Chamisa will accuse it of bias and try to make political capital out of it.”

The MDC’s appeal, which was lodged hours before the deadline on August 10, has already forced Mnangagwa’s inauguration — planned for August 12 — to be postponed.

International monitors largely praised the conduct of the election itself, although EU observers said that Mnangagwa, a former long-time Mugabe ally, benefited from an “un-level playing field”.

The court could declare a winner, call another election, or order a run-off or recount.

The inauguration should take place within 48 hours of the court’s ruling, according to the constitution.