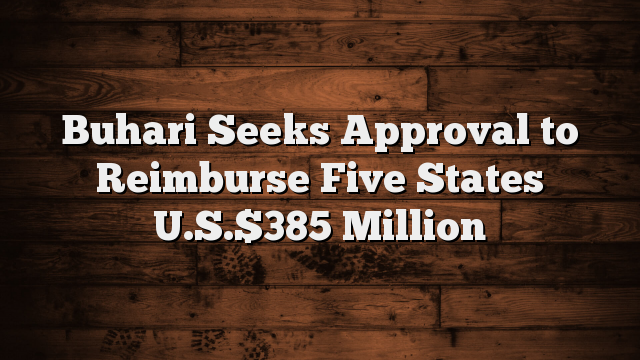 Abuja — President Muhammadu Buhari yesterday sought the approval of the National Assembly for the refund of N148.1 billion to five states for the execution of federal roads.

The two request letters from the president on the reimbursement of states and the PIB were read at the resumption of Senate’s plenary by the President of the Senate, Dr. Ahmad Lawan.

In another letter dated August 13, 2020, the president sought the approval of the Senate to reimburse five states with the sum of N148.14 billion for road projects executed on behalf of the federal government.

The letter read in part: “The Senate may wish to be informed that the federal government executive council (FEC) at the meeting of June 3, 2020 approved the reimbursement of N148,141,969,161.24 through the issuance of promissory notes to the Bayelsa, Cross River, Ondo, Osun and Rivers state governments for Federal Road Projects executed by the States. The extract from the meeting referenced EC 11(2020)4 is attached as Appendix 1.

“The approval by FEC was subsequent to the recommendation of an inter-ministerial committee which reviewed the requests for the reimbursement made by the state governments for the projects. The committee reviewed the documents submitted and carried out physical inspection and verification of the projects in the respective states before making its recommendation to FEC. The summary of the amounts approved for each of the five states as stated.”

The two letters of request are expected to be referred to relevant committees at plenary on today.

Buhari also wrote to the House of Representatives, seeking passage of the PIB and approval for the federal government to reimburse the five states for constructing federal roads in the states.

The letters were read yesterday by the Speaker of the House, Hon. Femi Gbajabiamila, at the resumption of plenary.

In the separate letters dated August 13, and September 2, 2020, respectively, the President sought consideration and passage of the PIB and as well approval of the reimbursement of N148.14 billion through the issuance of promissory notes to the five states for federal road projects executed by the states.

Following the submission of the PIB to the federal lawmakers, Sylva and Kyari, who spoke yesterday during the Business Day Energy Series, said the passage of the bill was long overdue.

Speaking during the virtual programme tagged, “Nigeria at 60: Harnessing Nigeria’s Energy Potential for the Future,” Sylva said that Nigeria will continue to devote more attention to its gas resources as a form of cleaner, cheaper and more accessible energy source.

He assured Nigerians that when fully operational, the PIB which has been in the cold for over 20 years will unlock the country’s potentials in the oil and gas sector and boost the federal government’s industrialisation drive.

“This has become imperative in the light of the full deregulation of the downstream petroleum sector. And since natural gas offers a cheaper and cleaner fuel, we expect that its massive adoption and use in Nigeria will cushion the effect of transiting the country to a no-subsidy era,” the minister said.

“I will not end this discussion without emphasising the need for proper legislation. The passage of the Petroleum Industry Bill is long overdue and we are happy that just yesterday, the minister presented the initial draft of the bill to the National Assembly.

“I know that this is one piece of legislation that will expand economic growth and efficient operations,” he said.