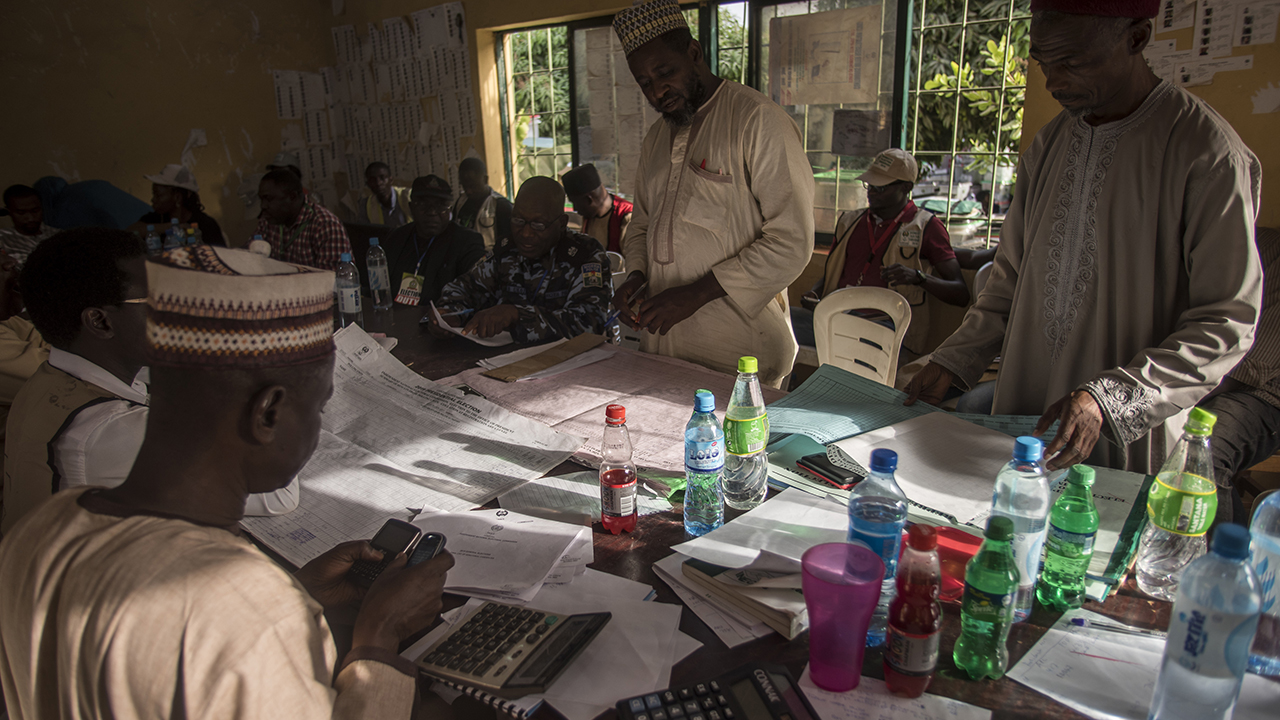 Collation officers and INEC members (Independent National Electoral Commission) at Local Government Area of South Kaduna on February 24, 2019, recount the election results before to send them to Abuja. – Nigeria awaited results from its presidential election, as civil society groups warned that disorganisation and violence may have undermined the polls. Results from February 23, 2019 vote were expected to trickle in to Abuja after being collated at the state and local levels. (Photo by CRISTINA ALDEHUELA / AFP)

YIAGA Africa yesterday said Saturday’s Presidential and National Assembly elections were characterised by the same shortcomings that marred previous elections in the country.

Election observers said as with past elections, the logistics challenges experienced by the Independent National Electoral Commission (INEC) resulted in late opening of balloting in 59 per cent of polling units.

It explained that there were several instances of misconduct by political parties in some polling units, as they compromised the ability of some citizens to vote, undermining public confidence in the process.

According to YIAGA Africa, these issues do not necessarily undermine the overall credibility of the process, but Nigeria missed an opportunity to improve the quality of its elections.

“INEC should improve its capacity to deliver credible elections and our political parties should play according to the rules. Failure to do so could fundamentally threaten our democracy.”

It also noted that in spite of the one week delay, INEC continued to experience significant logistics challenges on Saturday, February 23, 2019, which resulted in late opening of polling units.

YIAGA AFRICA further disclosed that counting procedures were not rigorously adhered to in all polling units, and registers with particular concern that results were not publicly posted at the polling unit in 19 per cent of polling units.

Finally, YIAGA AFRICA noted that its preliminary estimates for voter turnout indicate that turnout will be lower than in 2015.

Meanwhile, the Coalition of United Political Parties (CUPP) has alleged collaboration between the FCT INEC staff and the Resident Electoral Commissioner (REC) to cancel some Area Council Presidential election results in the FCT.

It noted that the Peoples Democratic Party (PDP)’s candidate, Atiku Abubakar won in the FCT, but that INEC was planning to declare the exercise inconclusive to enable President Muhammadu Buhari and the All Progressives Congress (APC) to fully prepare in collaboration with security agencies to write results in those areas during a rerun.

The coalition claimed that the move was due to pressure from security agencies and APC chieftains working on the instructions of President Buhari.

CUPP spokesman, Ikenga Ugochinyere, in a statement also alleged that “President Buhari and his team after the FCT results were tabulated, realised that not only did Atiku defeat him (Buhari) but that he could not score 25 per cent of the votes cast, hence the plan to cancel results from the remote areas of Bwari and Abaji, among others to help declare the exercise in the FCT Inconclusive.”