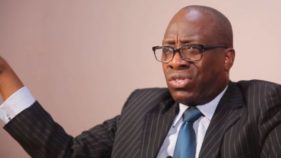 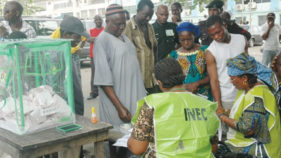 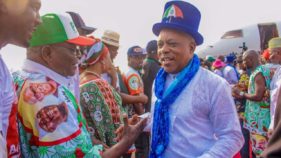 The Bayelsa Police Command on Monday confirmed reports that a Deputy Commissioner of Police deployed for election duties in Brass area of the state was manhandled by thugs.

Spokesman of Bayelsa Command, DSP Asinim Butswat told the News Agency of Nigeria (NAN) in Yenagoa that the Inspector-General of Police has ordered a probe into the incident which reportedly occurred on Sunday.

He however did not name the officer manhandled by the thugs.

“Following the unfortunate and serious assault on a Deputy Commissioner of Police, at Brass Island on 24 February 2019, by political thugs, the Acting Inspector- General of Police M.A Adamu, has sent a high powered delegation led by the DIG Elections South-South, DIG Fredrick Lakanu for on the spot assessment of the situation.

“On 24th February 2019, political thugs numbering over four hundred stormed the Government Jetty at Brass Island and assaulted a Deputy Commissioner of Police, who was deployed to supervise the elections in Bayelsa East Senatorial District.

“This conduct is viewed as a gross affront to the constituted authority and the laws of the land,” Butswat said.

According to Butswat, the DIG, while addressing senior officers at the Bayelsa State Police Command condemned the act in its entirety in line with the instructions of the IG.

The DIG subsequently ordered for the identification, arrest and prosecution of all those connected, including their proxies and sponsors, he said.

He quoted the DIG as stating that the IGP was miffed by the the ugly incident, but appreciated the conduct displayed by the officers in the face of obvious provocation.

The spokesman added that Lakanu also ordered for reinforcement to flash points in the State to forestall any break down of law and order and urged members of the public to be law abiding and not to be tempted into taking the law into their hands.

He appealed to spirited individuals to assist the Police with useful information on the identity of the perpetrators and any other information that may lead to the arrest of the suspects.