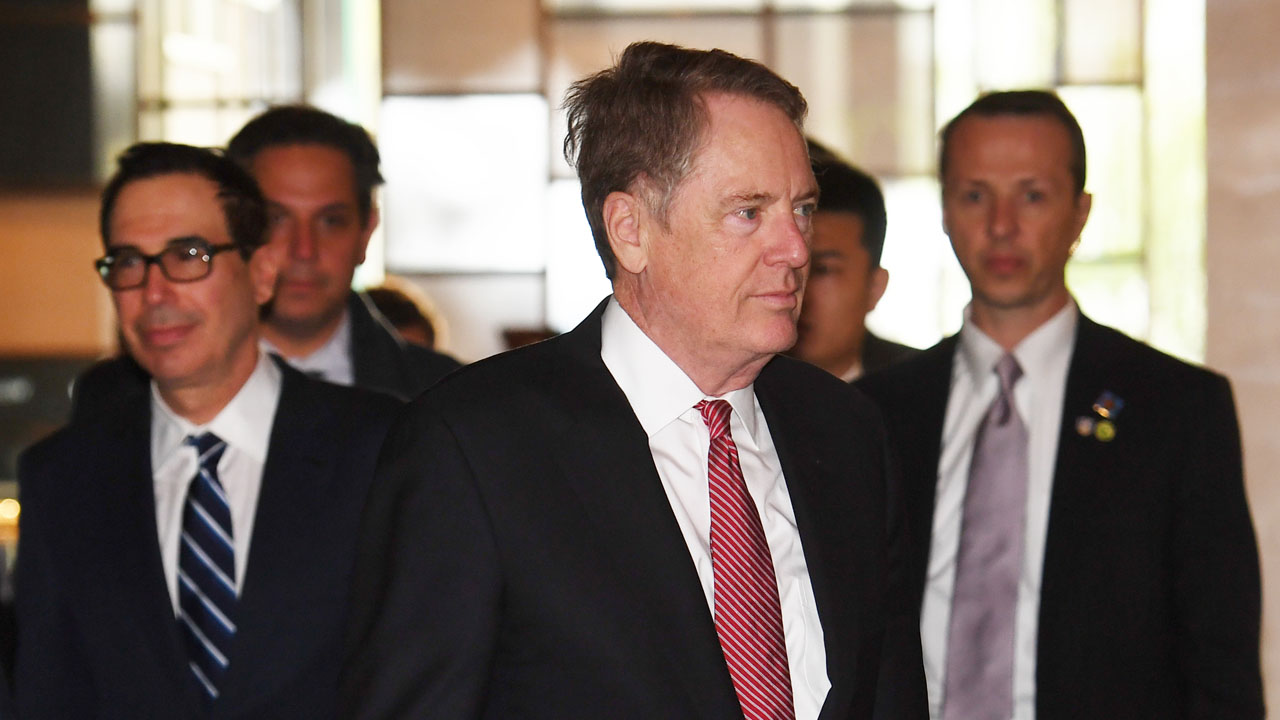 US Treasury Secretary Steven Mnuchin (L) and US Trade Representative Robert Lighthizer (C) arrive at a hotel in Beijing on March 28, 2019. – US negotiators arrived for the latest round of their trade talks on March 28 as the economic superpowers edge towards a deal to resolve a months-long spat that has rattled the global economy. (Photo by GREG BAKER / AFP)

Beijing said Thursday US and Chinese negotiators still face a “large amount of work” as they meet for fresh talks aimed at resolving a months-long trade war.

US Trade Representative Robert Lighthizer and Treasury Secretary Steven Mnuchin arrived for two days of meetings in Beijing with China’s top economic official Liu He, the first since China put into law new measures seen as an olive branch in their high-stakes stand-off.

While US President Donald Trump has voiced hope that he could soon hold a signing ceremony with his Chinese counterpart Xi Jinping, negotiations have dragged on, suggesting substantial differences remain.

“But there is still a large amount of work remaining to finish,” he said, adding both sides are “going all out to earnestly negotiate” following the truce struck by Xi and Trump in December.

The negotiators will have a working dinner on Thursday before a full day of talks on Friday, Gao said. Liu He will head to Washington next week for more talks.

“Ambassador Lighthizer and myself are pleased to be back here in Beijing. We look forward to productive meetings,” Mnuchin said ahead of the dinner.

Lighthizer has sought to play down expectations.

“If there’s a great deal to be gotten, we’ll get it — if not, we’ll find another plan.”

The two sides have slapped tariffs on hundreds of billions of dollars of goods since last year, hitting a slew of businesses.

Trump suggested last week some of those tariffs should stay in place after a deal is reached to ensure China follows through.

Market access
Beijing has taken steps to address some US complaints. Earlier this month, China’s rubber-stamp parliament rushed through a law that seeks to protect foreign firms from the forced transfer of technology.

Premier Li Keqiang on Thursday repeated his pledge to step up punishment for intellectual property infringers to ensure they “bear an unpayable cost”, addressing a major bone of contention in Washington.

“We will again widen foreign firms’ market access,” Li pledged at the Boao Forum for Asia, a Davos-like annual meeting hosted by China.

While the US has hit out at Chinese practices, Lighthizer told NPR “the kinds of things that we’re asking for are not anti-Chinese at all”.

Negotiators hope to iron out remaining differences on other issues including Beijing’s subsidies to state-owned firms and policies to build up Chinese companies in strategic sectors.

“In our conversations with the US government, they’ve indicated that subsidies which create an uneven playing field between foreign and domestic companies are most definitely something that continues to be negotiated,” said Jacob Parker, vice president of the US-China Business Council.

“I suspect this is one of the areas China is pushing back on, (and) it remains a core of the negotiations.”

When Li presented the government’s 2019 policy plans earlier this month, he made no mention of its controversial Made in China 2025 industrial policy, which had called for Chinese firms to take control of many strategic industries.

Foreign tech companies have also long been locked out of China’s market with many like Google, Facebook and Amazon blocked or facing restrictions.

Beijing has yet to give in to demands for greater market access to foreign cloud computing providers or loosen restrictions on overseas data transfer, the Financial Times reported this week.

The two sides also need to resolve when to remove the punitive tariffs on billions of dollars’ worth of goods and how to enforce any deal.

“The question will be the details and enforceability,” Lighthizer said, outlining a mechanism for US companies facing problems in China to bring cases to the US Trade Representative for discussion with Chinese officials.

“They’re committed to do this, but it’s going to be a question of whether they can get all the layers of government, I think, to follow through.”