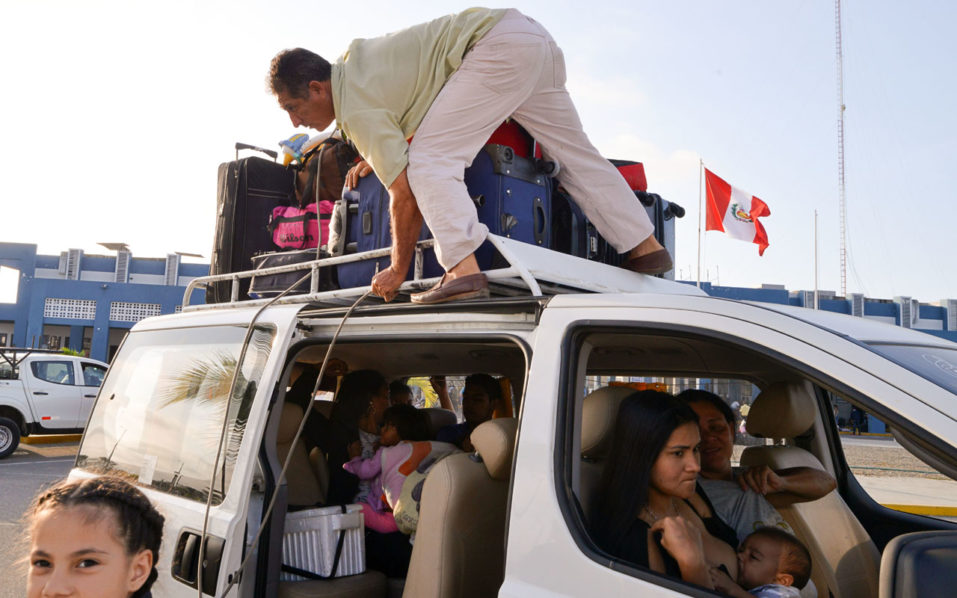 Venezuelan nationals load up the vehicles that will transport them to the bus stations in nearby Tumbes after being autorized to enter Peru at the binational border attention centre (CEBAF) in Tumbes, northern Peru in the border with Ecuador, on August 23, 2018. The United Nations on Thursday urged South American states to remain open to people fleeing the crisis in Venezuela, after Ecuador and Peru announced tightened border control measures. / AFP PHOTO / CRIS BOURONCLE

Days before Peru was set to tighten its border controls, Venezuelan migrants dashed to get into the country Thursday as new passport rules threatened to leave thousands stranded in Ecuador or Colombia.

In Tumbes, on the Peruvian side of the border with Ecuador, lines of people waited to have their papers checked, surrounded by banana plantations and sweating from the tropical climate.

Many had traveled on foot, but they had to accelerate their progress after Peru’s announcement last week that it would implement stricter border controls from this Saturday.

Following Ecuador’s lead, Peru decided it will only allow in Venezuelan migrants in possession of a passport.

The problem is that only around half of the Venezuelans heading south to escape poverty and economic crisis are carrying passports, according to Colombia’s migration director, Christian Kruger. The other half have ID cards.

Ecuador acted after more than half a million Venezuelans entered the country of less than 17 million people since the start of 2018.

Peru has also been struggling to cope as Venezuelans flow into the country at an average rate of 2,500 per day — although the United Nations Refugee Agency says that number has spiked recently.

Earlier this month a record 5,100 people crossed in a single day.

Weary and hungry
Peru’s migration superintendent, Eduardo Sevilla, said on Thursday that “there are already 400,000” Venezuelans in the country and if they continue flooding over the border at the same rate, there will be “half a million by the beginning of November.”

Many queueing at the border only left Venezuela on foot at the beginning of August. They’ve already travelled 2,000 kilometers (1,200 miles), but those who get through face another 1,200-kilometer journey to the Peruvian capital Lima.

Local churches handed out food to the weary and hungry migrants as they waited.

Meanwhile, Peru has called for calm, saying the number of Venezuelans affected by the new policy will be relatively minor.

He said Peru is improving its “migration control for reasons of order and security,” adding that “80 percent of Venezuelans who come into the country do so with a passport.”

Kruger criticized the measures announced by Colombia’s two southern neighbors, admitting he was “worried about the consequences.”

“Asking for a passport isn’t going to stop migration because they’re leaving their country not out of choice but out of necessity,” he said.

The UN says more than two million Venezuelans have fled the country since the current crisis began in 2014.

Under President Nicolas Maduro’s leadership, Venezuela is suffering from hyperinflation, shortages of basic necessities such as food and medicine, and failing public services.

‘Multilateral action’
Colombia’s Foreign Minister Carlos Holmes Trujillo said earlier this week the country would petition the UN to appoint a special envoy “to coordinate a multilateral action to combat this humanitarian crisis” at next month’s general assembly in New York.

Ecuador said it would organize a meeting of 13 Latin American countries to discuss the migrant crisis.

Kruger, though, called on Ecuador and Peru to work with Colombia, which has granted temporary citizenship to more than 800,000 Venezuelans, “in a coordinated manner, employing similar policies to address this phenomenon.”

Venezuela is in a fourth straight year of recession with double-digit falls in its Gross Domestic Product, while the International Monetary Fund says inflation will reach a mind-boggling one million percent this year.

Industry is operating at only 30 percent, hit hard by the oil price crash since 2014 in a country that earns 96 percent of its revenue from crude.

Maduro and his government have implemented a number of measures recently to try to boost the economy including a redenomination of the bolivar, a loosening of foreign capital rules and a massive increase in the minimum wage, but critics and analysts say those moves will likely be counterproductive.