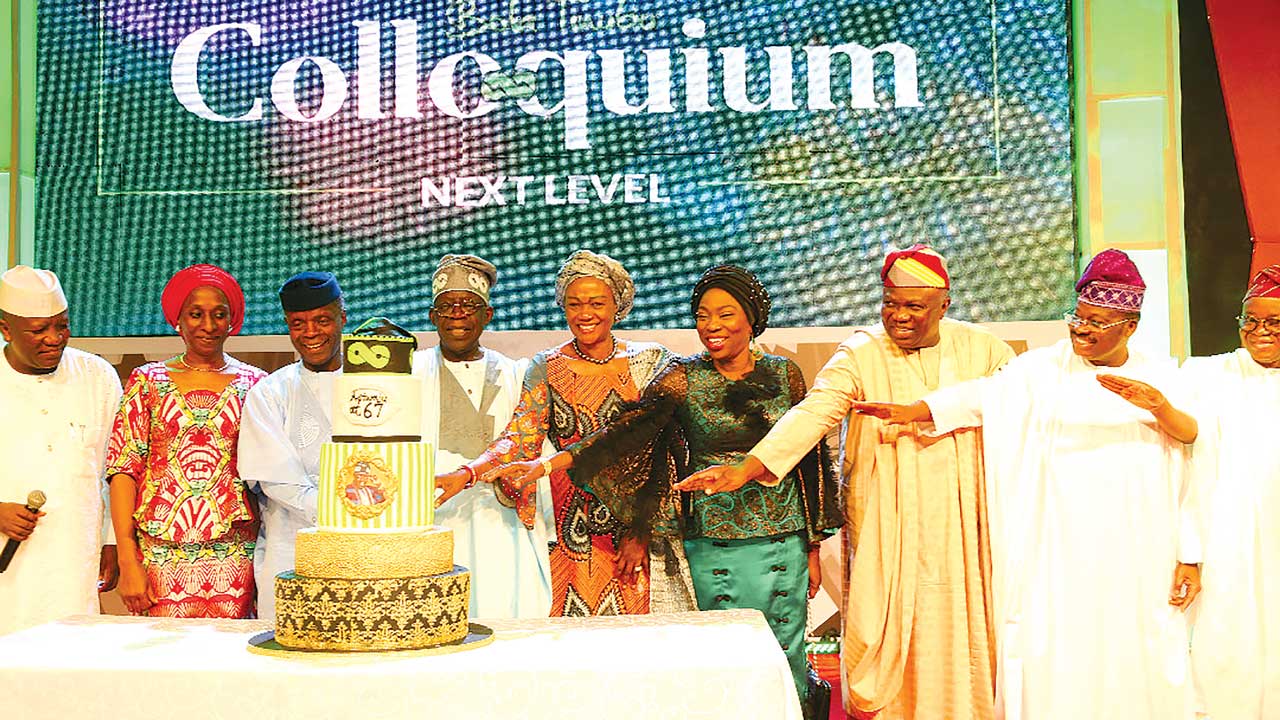 In what could be described as a repeat of history, President Muhammadu Buhari could not attend the 11th colloquium commemorating the 67th birthday anniversary of National Leader of the All Progressives Congress (APC), Asiwaju Bola Tinubu. Although the colloquium held at the International Conference Centre, Abuja, yesterday attracted virtually all the big names in the ruling party, Buhari’s absence drew side comments from the dignitaries.

Some recalled how the president’s failure to attend a forum convened by the APC leader on June 9, 2015 led to a leadership imbroglio at the National Assembly.About a kilometer away, meanwhile, the president attended the launch of the Micro Pension Plan, organised by the National Pension Commission at the State House Conference Centre, Abuja.

During the 10th colloquium, held last year in Lagos, in the buildup to the 2019 general election, Buhari was special guest of honour, with his visit to the city causing a major traffic lockdown.Coming barely one month after the presidential election, Tinubu and planners of the event might have reflected on the phrase: “If the mountain will not come to Muhammad, then Muhammad must go to the mountain.” Consequently, they scheduled the 11th colloquium to hold in Abuja for easy reach by the president.

The presence of two of the gladiators jostling for the leadership of the Ninth National Assembly, Senator Ahmed Lawan and Femi Gbajabiamila, who were on hand to pay tributes to Tinubu, helped to give the impression that the president might have tactically stayed away from the celebration to avoid close contact with the juggernauts.Despite Buhari’s absence, there was very tight security within and around the venue, such that even accredited editors and journalists were denied access.

To add colour to the event, which seemed to have been programmed to serve as a mini victory celebration for the ruling party, major streets and roads in Abuja were emblazoned with goodwill messages from the president to the celebrant and pictures of both leaders. Dignitaries at the event in which the Vice President Yemi Osinbajo represented his principal consisted of several members of the Federal Executive Council (FEC), National Assembly, and the APC’s 23 governors.

Members of the APC National Working Committee (NWC) led by the party’s National Chairman Adams Oshiomhole were also present. A slight drama took place shortly after Oshiomhole walked in and former Senate Minority Leader Godswill Akpabio was asked to yield his seat to the chairman. The development stirred murmurs of ‘uncommon dethronement’ around the hall.

The colloquium tagged, “Work For The People”, was mainly a celebration of the recent presidential poll in which the Independent National Electoral Commission (INEC) returned Buhari as winner.In his remarks, Tinubu expressed gratitude to the president for laying a good foundation for the economic recovery of the country, even as he acknowledged the challenges faced by the administration.

While assuring that Nigeria would reach its next level of development, the former Lagos State governor admitted he would have felt miserable on his birthday had the APC lost the presidential poll.He paid tributes to the Oshiomhole-led NWC for the feat and for ensuring that the party won majority seats in both arms of the National Assembly.

He blamed the opposition Peoples Democratic Party (PDP) for the infrastructural decay in the polity and assured that there would be increased electricity generation, transmission and distribution by more than 50 per cent within the next four years. This, he said, would require bold reforms, which include revisiting the privatisation policy in place when the PDP was at the helms of affairs.

Warning against the planned increase in Value Added Tax (VAT), he said government must not go into any venture that would reduce the purchasing power of Nigerians.“Consumer spending is dipping. And this is the place I will stop and appeal to Prof. Yemi Osinbajo, the vice president, and his team to put a huge question mark on any increase on VAT, please.

“If we reduce the purchasing power of the people, we can further slow down the economy. Let us widen the tax net. Those who are not paying now, even if it is inclusive of Bola Tinubu, let the (tax) net get bigger and it will take in more taxes instead of additional layers of taxes. For now, I stop here.”

Buhari, who used the occasion to reel off his achievements in the last three years, described Tinubu as a detribalised Nigerian who means well for the country. He recalled how the APC leader offered appointive positions to people, irrespective of tribe and religion, while he was Lagos State governor. Tinubu’s life, he said, was worth celebrating.

According to him: “We do it in celebration of a man who has spent the last 30 years of his life in creative and catalytic public service. From his days as governor of Lagos State, he provided thoughts and vision in all aspect of governance. He is not a lawyer as many of us know, but there are few Nigerians who have provoked so many legal controversies and constitutional challenges resulting in several landmark judicial pronouncement, especially in the area of true federalism and what today is loosely described as restructuring.

“Many of us know that he is, of course, not an engineer, but a lot of his vision is what is responsible for what we see today in Lagos, the BRT, the Lekki Industrial Zone, even the Eko Atlantic Project, and of course, the reform in the tax system of Lagos State. Today, Lagos as we know, earns more revenue, more IGR, than 31 states of Nigeria put together. That began in 2001.”

He added: “A government, coming after so many years of waste, must be a government, first, that emphasises fiscal prudence, a government that emphasises integrity in public finance, so that it would manage the little resources to achieve the maximum that can be achieved. And that is what President Muhammadu Buhari set out to do. As I keep saying, the president has never claimed to be an orator. He just gets things done.

“It was under President Muhammadu Buhari that three of the four refineries that we have today were built, when he was Minister of Petroleum. He built 3500km of pipelines as minister of petroleum in a three-year period. So, there is a track record, not of talking, but of just getting things done. And this is what we have seen in the past four years. That is why we were able to set aside money for the Lagos-Ibadan Expressway. And that is going on at present.”